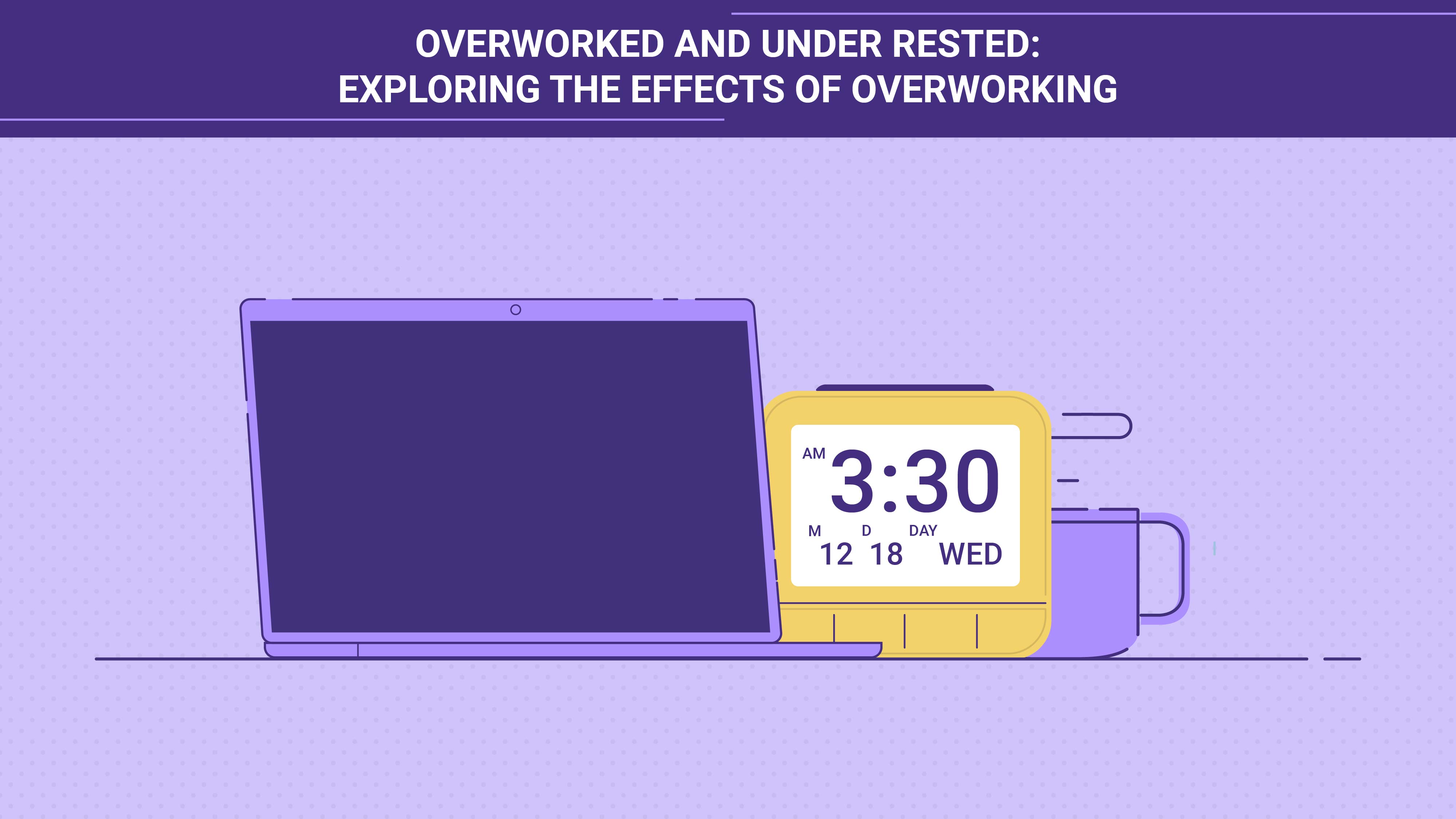 Overworked and Under Rested: Exploring the Effects of Overworking

Working long hours or extended shifts is the best way to get ahead in today’s competitive world, right? Not necessarily, because data we recently gathered show how working long shifts can negatively impact your personal and family life as well as your mental and physical health.

To explore the issue in depth, we surveyed over 2,800 people, narrowing the field to 1,036 who consistently worked from 40 to 60 hours or more each week, including their primary and side jobs. Take a few minutes to examine the results and consider if you too may need to scale back the number of hours you work each week.

Balancing the Scales of Life

Finding the right balance in life is a challenge for most professionals. If you want to put in extra time at work, then something has to give. Will it be time with family and friends, a healthy workout routine, or even the sleep we all need? 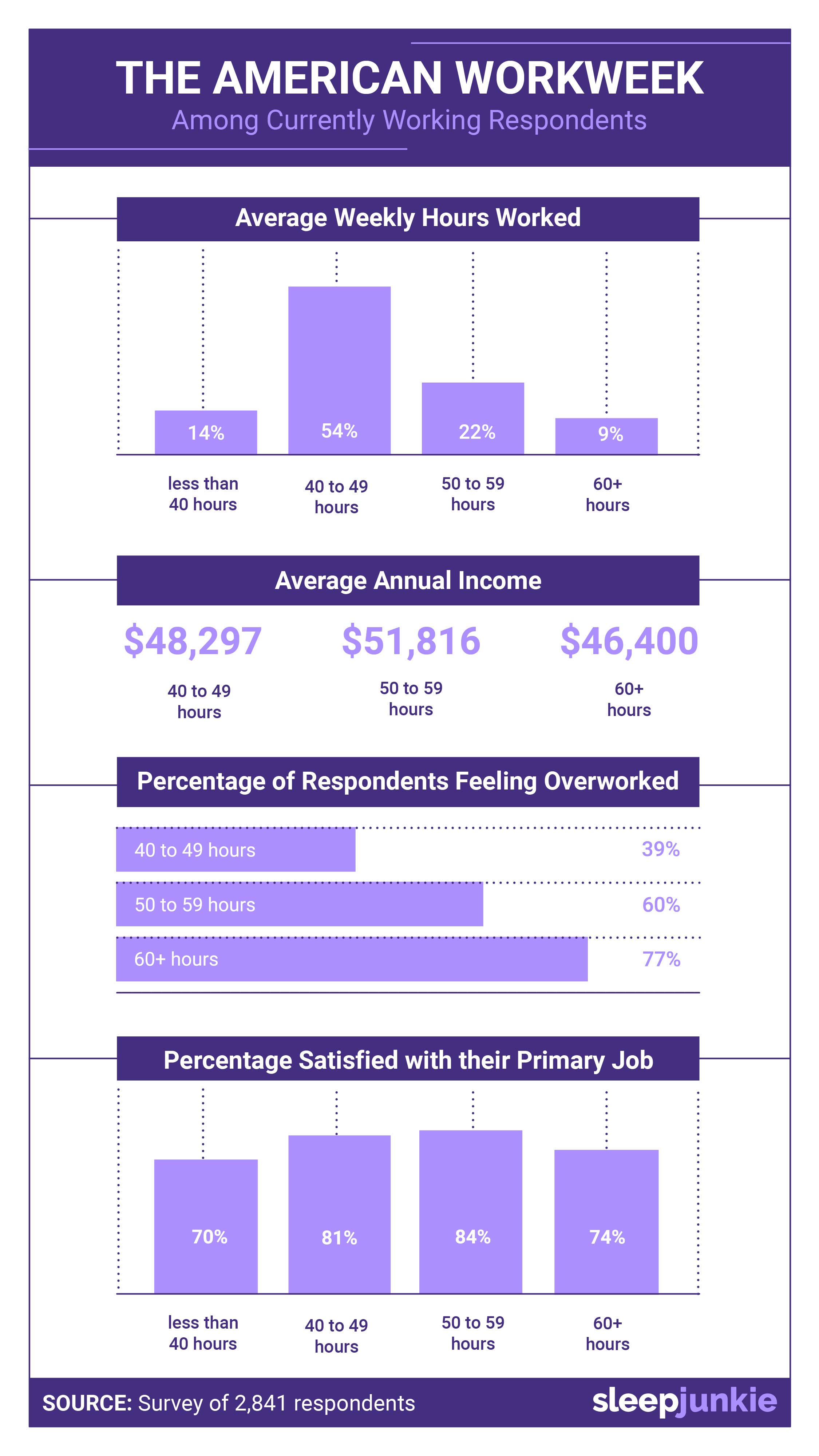 While more than half of respondents worked between 40 and 49 hours weekly, nearly 1 in 3 typically worked 50 or more hours every week.

At first, you might assume that the more someone works, the more they’ll earn. However, we discovered that people working 60 hours or more each week actually made less money than other groups who worked less.

That’s correct, many of us who work the most are actually bringing home the least.

But wait, why are those working the most hours earning less? One theory is that some people – particularly those on the lower income scale – work multiple jobs to afford life’s necessities.

Money aside, feeling good about your job and the amount of time you invest at work each week is also paramount. Those working 50 to 59 hours per week reported the most job satisfaction, while those working less than 40 hours reported the least. As one might expect, however, the more hours people work the more they tend to feel overworked. For example, 77 percent of respondents spending more than 60 hours every week on the job feel overworked, compared to 60 percent working 50–59 hours, and only 39 percent working 40–49 hours every week.

Working long hours may earn you some credit with your supervisor or help you meet your financial obligations, but it comes at a cost. A majority of people working 50 hours or more each week, and a large majority of employees putting in 60 hours or more, felt overworked.

Whether you’re fresh out of school and are starting your first professional job, or you’ve taken on a second job to make ends meet, the average person needs at least five months to adjust to a 50-hour or more workweek. 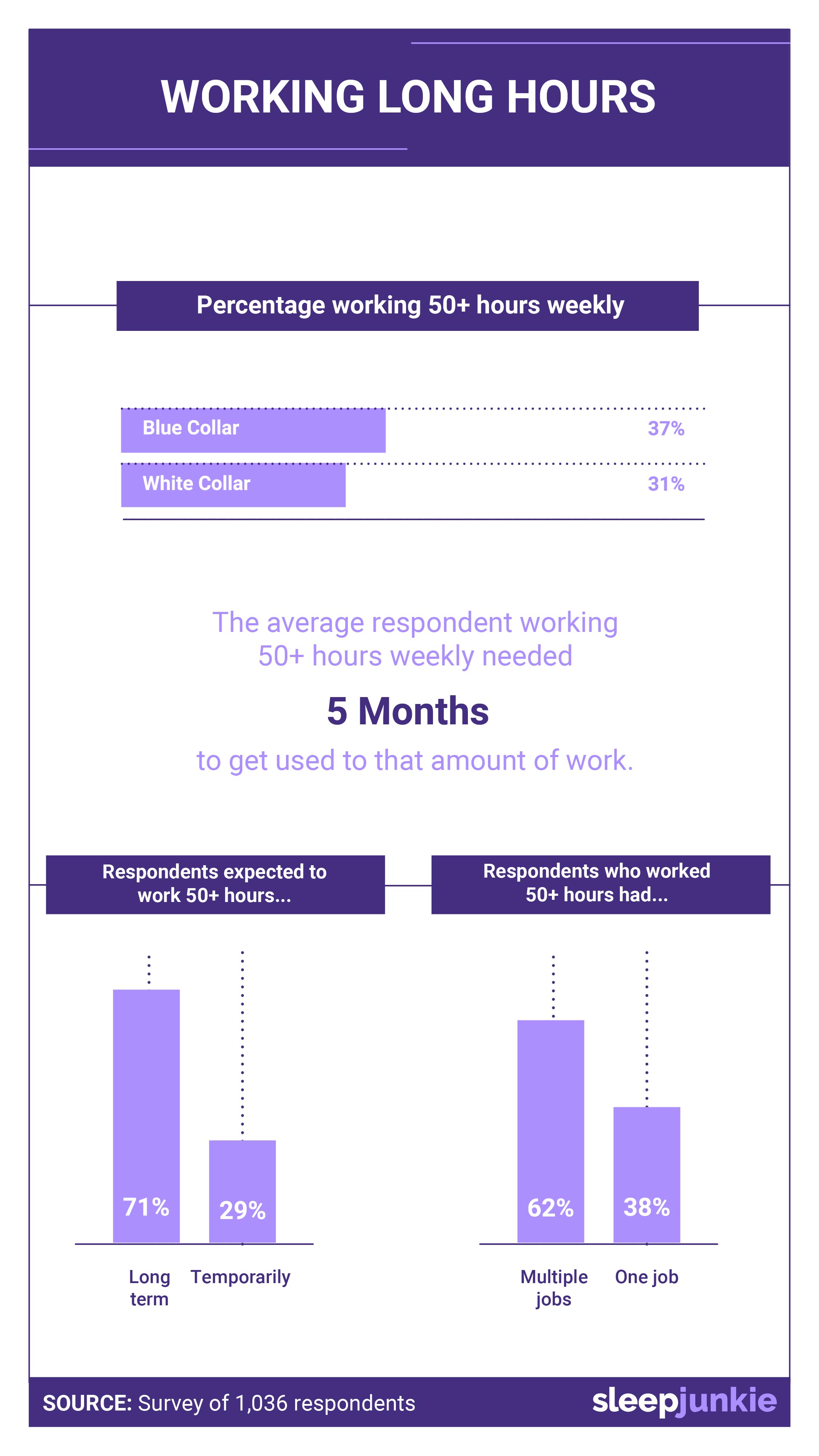 In 1938, the Fair Labor Standards Act created a “maximum” 40-hour workweek that went into effect across the U.S. in 1940. Workers who put in more than 40 hours of work earned “overtime” or additional pay.

One important caveat: that provision only impacted non-exempt employees. Exempt, or salaried employees, are not compensated extra for working over 40 hours each week. More than one third of our respondents work 50 or more hours every week at only one job.

A large majority of our respondents – approximately 2 in 3 – resorted to multiple jobs in order to earn the income that they needed or wanted.

Our survey also showed that long hours are a permanent reality for most of the people who work them. Seventy-one percent of people who worked long hours expected to keep their busy schedule for the foreseeable future.

Many people in our survey said they worked long hours because they had no other choice. However, just over a third of people chose to work longer hours. A substantial majority of both groups – 4 in 5 – said it was worth it. 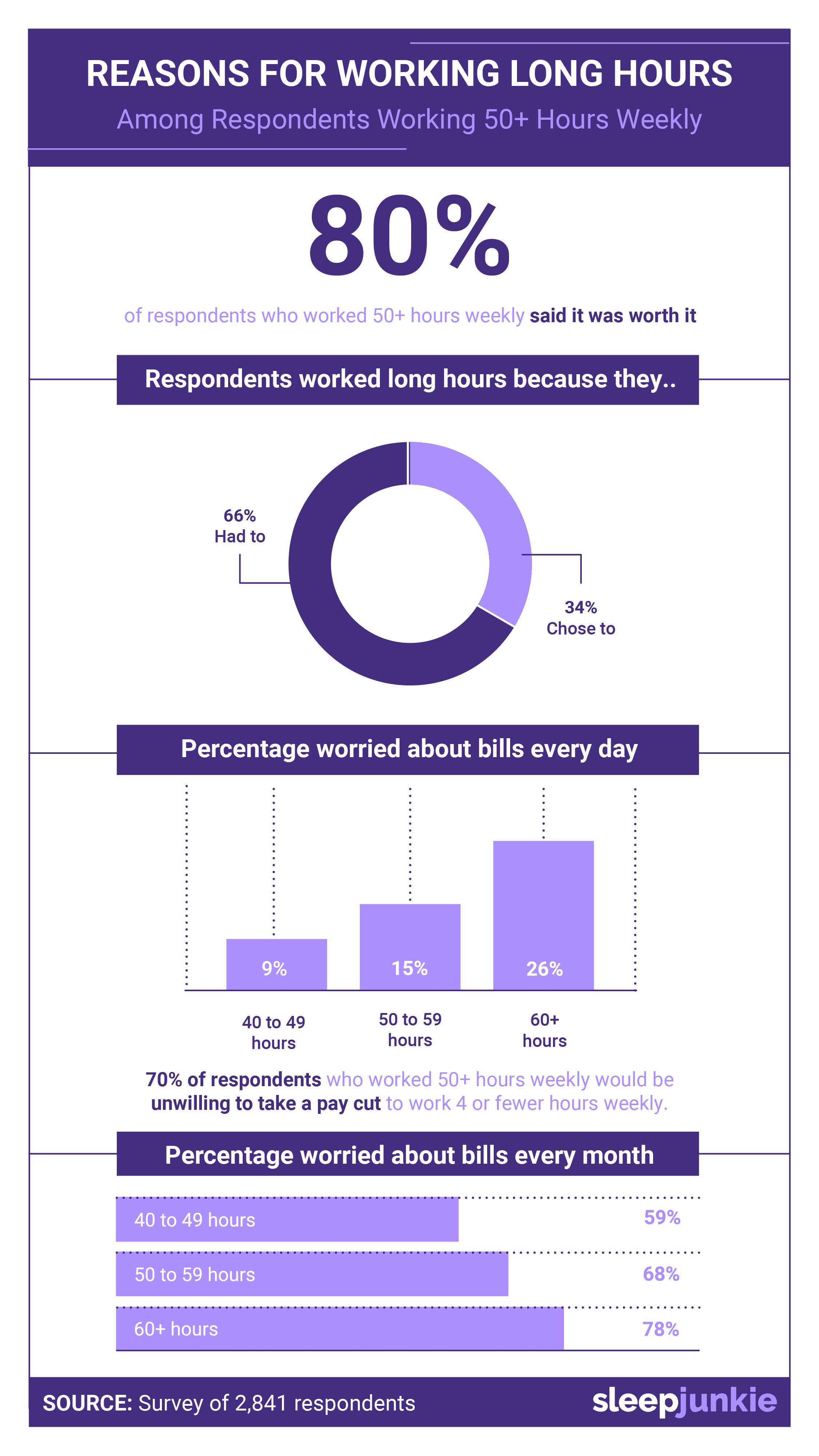 Many people worry about meeting their monthly financial obligations, especially if they are supporting others. According to our findings, those working the most also worried the most about money.

How Overtime Impacts Your Personal Life

Before we explore how working long hours impacts your health, let’s see what toll it can take on your personal life. 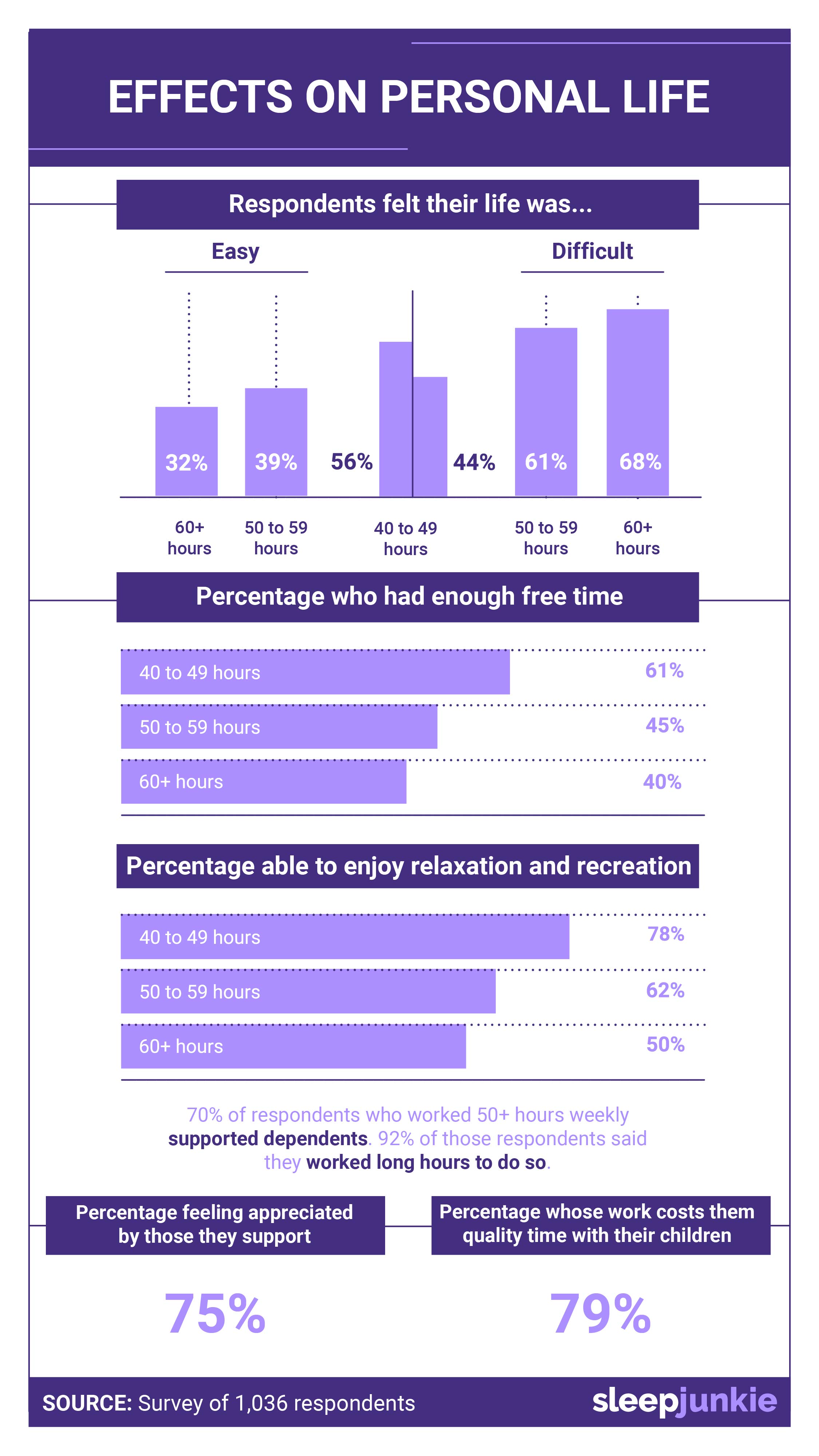 When workweeks were broken down by “difficult” and “easy,” 68 percent of workers putting in 60 hours or more weekly reported life being difficult, compared to only 32 percent feeling their life was easy.

Almost two-thirds of those working 50 to 59 hours reported life as difficult, while 44 percent of employees putting in 40 to 49 hours said the same.

When it comes to free time, a similar pattern emerges. While none of the three groups of workers showed an overwhelming amount of satisfaction, longer hours were correlated with decreases in both the amount of free time and one’s ability to enjoy it.

Experts say scheduling “down” and “me” time is one way to get the most from a hectic workweek.

The most significant difference was seen with respondents working 50 to 59 hours weekly. Only 45 percent said they had enough free time, although 62 percent enjoyed their relaxation and recreation hours.

There are multiple reasons for wanting more income, but one reason acknowledged by 92 percent of respondents was to support dependents such as children, parents, or other family members. Interestingly, only 75 percent said they felt appreciated for working longer hours for those they helped support.

Long Work Hours and Your Health

If there is a significant impact of working long hours every week, it’s usually to your health. Eighty percent of our respondents working 50 or more hours weekly felt their current workload wasn’t sustainable. 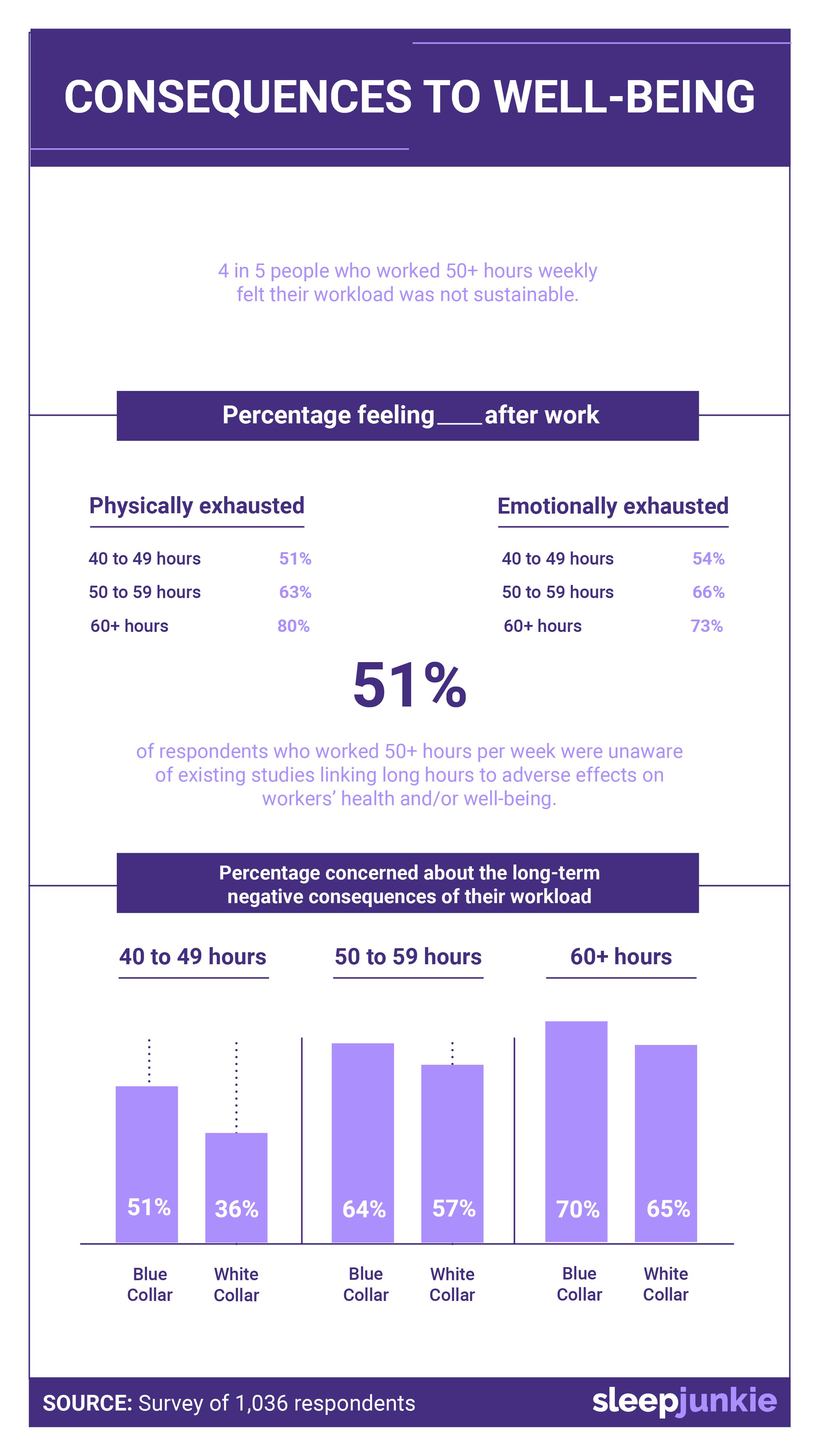 Some studies demonstrate working too much isn’t beneficial to your health, yet half of those working 50 hours or more weren’t aware of the negative health consequences.

One example cited in another study is that those working between 60 to 70 hours every week are 42 percent more likely to experience coronary heart disease.

In addition to the physical side effects of working long hours each week, there is also an emotional toll. Just shy of three-fourths who worked 60 hours or more said they felt emotionally exhausted. Two-thirds of those working 50 to 59 hours every week reported the same.

A slightly higher number of percentage points was seen in blue- and white-collar respondents working 50 to 59 hours, while the most substantial difference was in the 40-to-49 hour category, where more blue-collar workers worried about the negative health consequences of exceeding the average workweek.

There is a definite correlation between fatigue and workplace accidents. According to our data, those working 60 hours or more weekly got almost five hours less sleep each week than their colleagues who worked 40 to 49 hours. 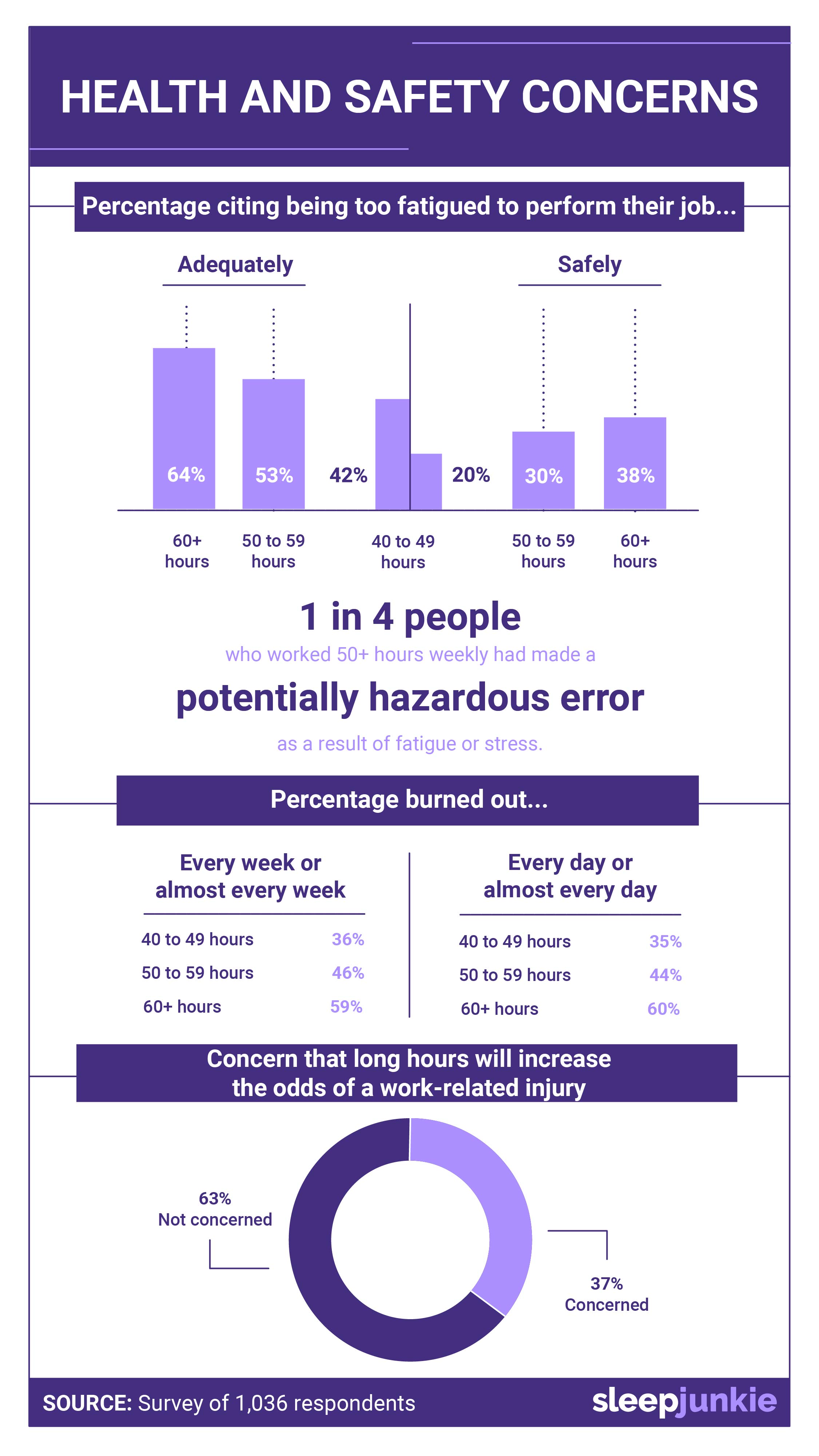 Government reports from the U.S. Department of Labor echo the fact that longer work hours, extended or irregular shifts, and worker fatigue all contribute to more accidents at work.

Over 40 percent of our respondents working 40 to 49 hours each week said fatigue played a role in their job performance. What’s more, the percentage grew about 10 percentage points for every additional 10 hours worked weekly.

Besides not getting enough sleep, those working 60 hours or more weekly experienced difficulty staying asleep once they laid their exhausted heads down. Other surveys show that first responders, such as police officers, firefighters, and nurses, averaged fewer than the recommended seven to nine hours of daily sleep.

That’s one reason 37 percent of respondents in this survey were concerned long hours would increase their odds of experiencing a work-related injury.

Finally, the last thing employers want is seeing employees burn out and not perform their best. In this case, the more hours worked each week, the more employees felt burned out.

Six in 10 people who worked 60 hours or more weekly experienced daily burnout, compared to only 36 percent who worked 40 to 49 hours.

Adequate Rest is an Antidote for Long Work Hours

Despite a demanding work schedule, there are solutions to help you get the rest you need and deserve.

First, develop a consistent sleep schedule. Not only does consistency improve quality sleep, but also it can impact your health, especially your BMI and body weight. Fitting in short naps also has multiple benefits. Studies found that pilots who napped 26 minutes increased their alertness by 54 percent and performance by one-third.

Finding the right mattress can improve your overall sleep experience too. After all, we’re supposed to spend about a third of our life resting, so why not make sure you have the best mattress for when you can get some shut-eye.

When shopping for your best mattress, consider mattress types, your sleep style, any aches and pains you experience, and your budget. Many mattress in a box brands offer high-quality mattresses at affordable prices. To learn more, check out some of our other mattress guides.

We also suggest saving on your next mattress by shopping the year’s big mattress sales:

For this study, we surveyed 2,841 people using Amazon’s MTurk platform. For the bulk of our findings, the survey results from a primary group of 1,036 were selected. Of those 1,036 individuals: 529 worked 40 to 49 hours weekly; 358 worked 50 to 59 hours weekly; and 149 worked 60 hours or more weekly. Weekly hours worked included side jobs and other sources of earned income. To help ensure accurate findings, all respondents were required to pass an attention-check question.

In some cases, questions and answers have been rephrased for clarity, and efforts were made to ensure that the opinions of our respondents were accurately and fairly represented. In cases where respondents were asked about job safety and hazardous errors, responses were only collected from respondents with jobs where those concerns were applicable. In some cases, percentages may not add up to 100 due to rounding. These data rely on self-reporting and are intended for entertainment purposes only. Due to the nature of self-reporting, potential issues may include selective memory, telescoping, attribution, and exaggeration.

If your readers can benefit from the information in this survey, we invite you to share it widely, as long as it’s for noncommercial purposes. Our small request is to provide a link so that sleep-deprived folks can drift off after reading the entire report.