It’s widely recognized that teachers in America are underpaid. Despite the critical role they play in helping to shape the future leaders of the country, the pay gap between teachers and other professions that require similar levels of education is now the largest on record.

More than being underpaid and feeling unappreciated, teachers often admit to feeling overworked. Rather than clocking out and leaving their work behind them, teachers have to take home assignments that need to be graded and make plans for the next day before they can call it a night.

With long hours and low pay, we wanted to find out just how tired teachers in America are. We surveyed over 500 active teachers to find out how many of them feel tired from the moment they wake up, how they cope with their lack of sleep, how many feel burned out, and what they think would help fix the situation. Read on to see what they had to say.

The Early Bird Gets … Exhausted

If you’re constantly waking up feeling tired, your body is trying to tell you that something isn’t right. Feeling exhausted when you get out of bed rather than feeling energized and ready to go can be a sign that your mattress needs to be replaced, or that you’re drinking too much caffeine late in the day.

Not getting enough sleep at night isn’t just going to make you feel groggy the next day, it could be impacting several other aspects of your health as well. It’s widely understood that the average adult needs between seven and nine hours of sleep every night, which works to help keep your immune system functioning, and your mind clear. Consistently not getting the recommended amount of sleep can ultimately have a negative impact on your physical and mental well-being.

With so many teachers waking up feeling tired, we asked them how they cope with not getting enough sleep at night. More than 1 in 5 teachers (22 percent) confessed to taking naps during their lunch breaks, while 19 percent had almost fallen asleep during class, and 15 percent had fallen asleep in the break room.

Roughly 1 in 10 teachers have taken a nap in their car because they were too tired to stay awake all day, and 2 in 5 reported drinking four or more cups of caffeinated beverages on an average school day. Among 30 percent of middle school teachers, the daily average number of caffeinated drinks rose to five.

Seventy-four percent of teachers said being tired caused them to feel less patient, followed by less attentive (58 percent) and more aggravated with their students (51 percent). Twenty-three percent even admitted to mixing up or forgetting their students’ names.

No Rest for Educators

You might think summers off and long breaks in the spring and winter make being a teacher a rather relaxing profession. However, 68 percent of teachers polled acknowledged feeling overworked, while 29 percent said they’re stressed or very stressed during the average school week.

When it comes to helping teachers feel well-rested, the educators we polled had some solutions. 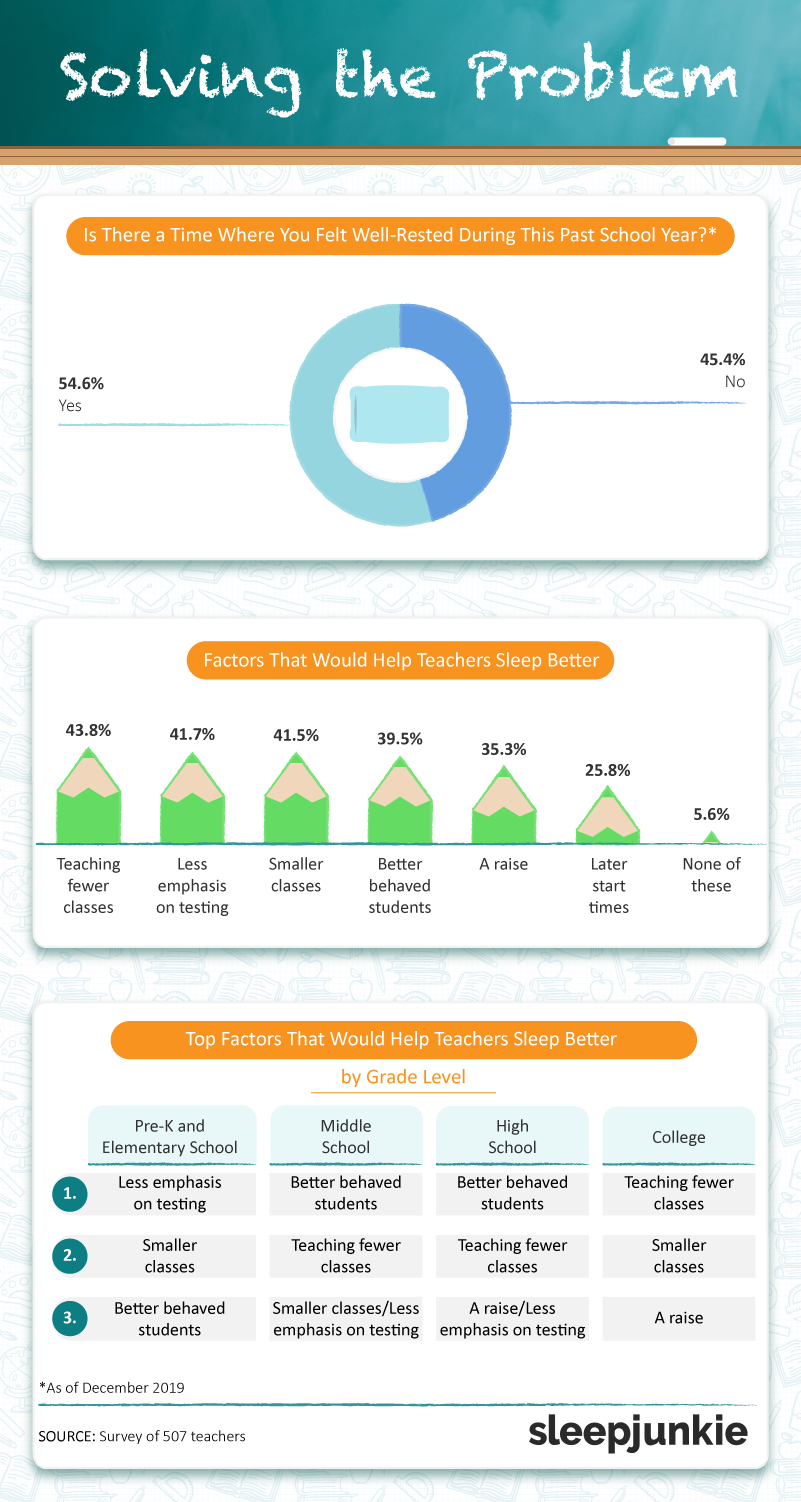 More than half (over 54 percent) of teachers acknowledged there was a time in the last school year where they had woken up feeling well-rested. So what helps? According to 44 percent of teachers, having fewer classes is the biggest step toward supporting teachers after hours. Less emphasis on testing (42 percent), smaller class sizes (42 percent), and better-behaved students (40 percent) would also have a strong impact on a teacher’s energy and rest.

In light of these findings, Ashley Doyle, staff writer at SleepJunkie had this to say: “Teachers play a crucial role in shaping, developing, and educating young people. In addition to higher levels of stress, many teachers don’t get enough sleep at night. This study shows teachers are waking up tired more often than not and are trying to sneak in naps throughout the workday. They deserve a good night’s rest and a productive workday.”

At SleepJunkie, we’re committed to changing the way you think about sleep. With a tireless focus on researching healthy habits under the sheets, we’re focused on encouraging the highest sleep standards. You’ll also find the best mattress reviews and solutions for sleeping better at SleepJunkie.com.

All data shown in the above study rely on self-report, and there are certain issues that can accompany self-reported data, such as exaggeration and telescoping. To combat these, an attention-check question was given to participants, and only those who passed the attention-check were allowed to be included in the full study.

Do your readers need a lesson in better sleep management? Help school them by sharing this study for any noncommercial use with a link back to this page as a credit to our team of contributors.