If you often find yourself nodding off during the workday, you might want to bookmark this article for future reference! As science learns more about sleep and how our brains work, it is becoming clear that well-rested people perform better. While this seems like common sense, we often forget that rest is a necessary ingredient for success for tasks from driving to decision-making and communicating to working. A few recent studies have highlighted the effects of sleep on work performance as well as potential benefits of naps, offering interesting considerations for both employees and employers.

A study released in 2013 by Dutch researchers looked at data from 1435 people procured in a previous study, the Netherlands Study of Depression and Anxiety, to find links between work performance, sleep and anxiety/depressive disorders. Researchers sought information on medical and mental histories, sociodemographics, and work habits. Participants were asked about work absences, self-assessed work performance, sleep duration, and sleep issues, among other subjects. About half of the study’s participants were diagnosed with anxiety or depressive disorders while the other half were not.

Effects of Sleep on Work Performance 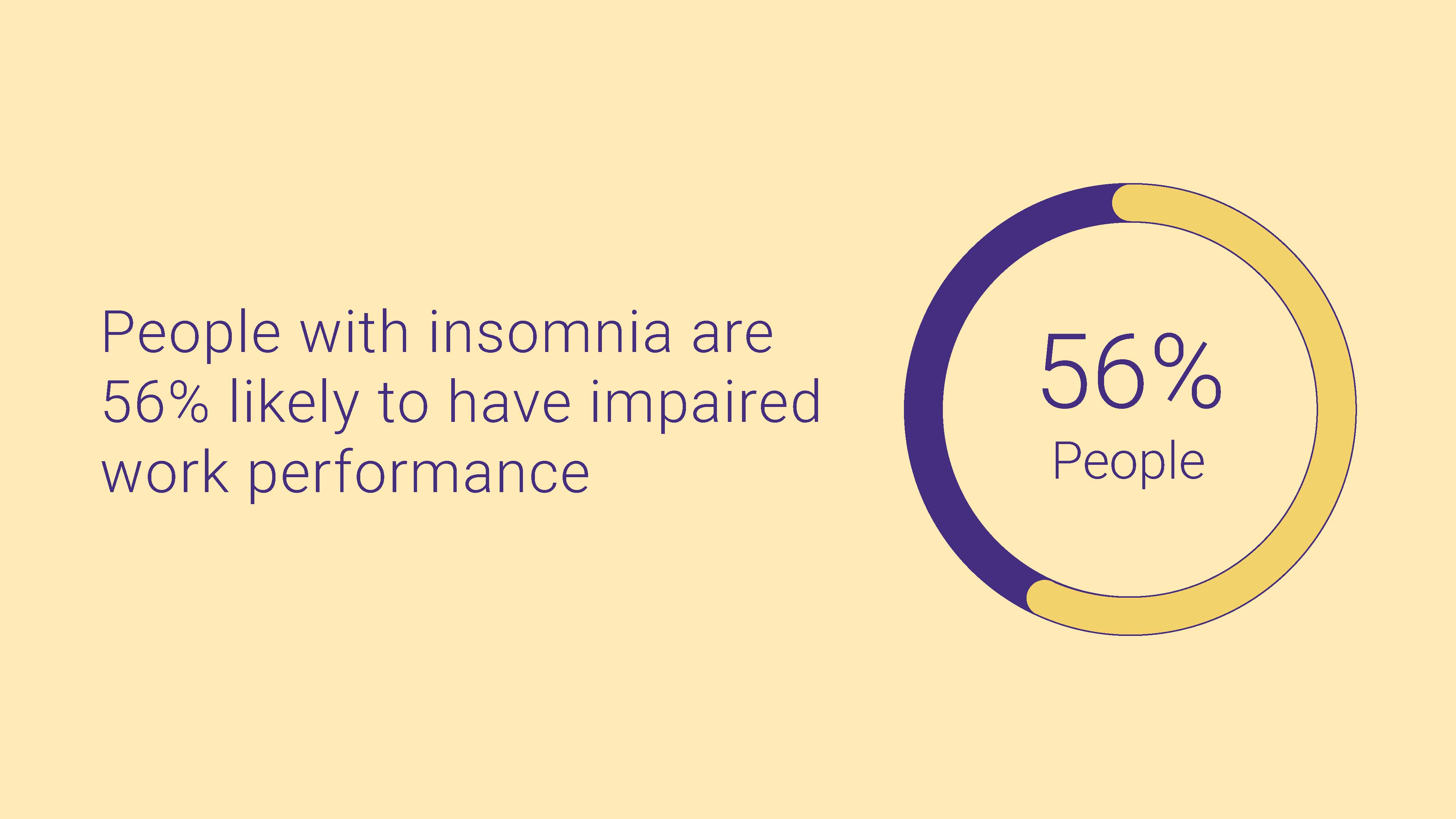 Based on the research, surveys and interviews, the study concluded sleep problems were likely to impair work performance particularly for people with depression and anxiety disorders. Here are the statistical highlights from the results:

In terms of rest affecting work, those that face the most consequences are people with depressive disorders who sleep less than 6 hours per night and/or experience insomnia, as well as people without disorders who have insomnia or sleep more than 10 hours per night. These groups are more likely to notice a decline in their work performance and to take absences of two weeks or longer from their jobs.

This is not the first study to look at sleep and work performance, either. A 2012 study from Brigham and Women’s Hospital demonstrated that work performance consistently worsened the longer a sleep-deprived person was awake. The study allowed people an average of less than 6 hours of sleep per night over one month, and the participants’ performance declined each week. Disasters such as the Three-Mile Island and Chernobyl nuclear accidents, the Challenger explosion, and the Exxon Valdez oil spill have also been linked with sleep-deprived workers. For people whose jobs involve driving, several other studies have documented the dangers of drowsy driving, which are on par or even potentially more dangerous than drunk driving.

An article from the Harvard Business Review interviewed renowned sleep researcher and Harvard professor Dr. Charles A. Czeisler on the subject of sleep deficit. To demonstrate the seriousness of the issue, he states:

“In a study our research team conducted of hospital interns who had been scheduled to work for at least 24 consecutive hours, we found that their odds of stabbing themselves with a needle or scalpel increased 61%, their risk of crashing a motor vehicle increased 168%, and their risk of a near miss increased 460%. In the U.S., drowsy drivers are responsible for a fifth of all motor vehicle accidents and some 8,000 deaths annually. It is estimated that 80,000 drivers fall asleep at the wheel every day, 10% of them run off the road, and every two minutes, one of them crashes…. Otherwise intelligent, well-mannered managers do all kinds of things they’d never do if they were rested—they may get angry at employees, make unsound decisions that affect the future of their companies, and give muddled presentations before their colleagues, customers, the press, or shareholders.”

In the article, Dr. Czeisler also recommends that businesses take sleep seriously by educating workers on sleep hygiene the same way they do harassment and other policies, take rest into account when scheduling, provide sleep disorder screening, and that supervisors model healthy sleep habits. While these types of policies may not be at the forefront of most corporate agendas, the last few years have seen some promising trends.

In the dog-eat-dog business world, sleep is often portrayed in a negative light, with colleagues trading battle stories of exhaustion between late nights and early mornings. However, tired employees may be less productive on the job, more likely to miss work, and pose greater liability, so this may not be the best culture to foster in the long-term. To put it in concrete terms, the Better Sleep Council estimates that sleep deprivation costs US businesses over $150 billion per year. Some companies have begun taking a more progressive approach to sleep, encouraging employees to nap or get adequate rest in the hopes their staff will be happier and perform better. The last available statistic from 2011 placed nap rooms in about 6% of workplaces, which is likely higher by now. The following companies offer special nap perks, a trend that may soon become as popular as office gyms for health-minded workplaces.

Some of the biggest names in business understand that happy, well-rested workers are going to get more done and do their jobs better. By offering a quiet space, people can take a quick power nap on a break or after lunch to get refreshed or catch up on sleep without having to leave the office or hide under their desks. In articles and interviews, many of the above companies have reported positive results despite the stereotype of naps equalling laziness.

How Naps Can Help

Although daytime rests have long been looked down upon in American culture, several others have historically embraced the nap. For example, Spain and several Latin & South American countries traditionally have an afternoon siesta for 1-2 hours, Italy has a similar practice called riposo as do Greece and Malta, Germans traditionally practiced a midday rest which is seeing some resurgence, several Middle Eastern cultures take an afternoon break for rest, schools in China often have naps after lunch and daytime naps for adults aren’t frowned upon, and cat naps and corporate nap rooms are also common in Japan.

Naps offer concrete benefits demonstrated by researchers over the last 20 years, which is why many corporate environments have begun to take notice and why the concept of a siesta has seen a resurgence in popularity in the US, Europe and Eastern cultures as well. Even if your boss isn’t inclined to outfit your office with a nap room, you can always retreat to your car, rest for a few minutes at your desk, or find another suitable place, especially if you aren’t getting at least 7 solid hours at night.

Here are a few good reasons to indulge in a power nap, or to lobby for an office relaxation room:

Though naps can be beneficial, snoozing longer than 20 minutes may cause temporary sleep inertia and grogginess, especially if you are sleep-deprived (as your body slips into deep sleep faster). Naps that are taken too long or too close to bedtime can also affect nightime patterns. Ideally, keep your daytime naps between 10-30 minutes and at least 6 hours before your bedtime to experience the most significant benefits.

Power naps aside, getting enough quality rest at night is one of the most important things you can do for your long-term health and to stay at the top of your game. Here are a few good sleep hygiene practices you can employ to snooze better.

With so much to do every day, it’s easy to understand how sleep gets pushed to the bottom of the to-do list. Afterall, sleep doesn’t help us  make money, do housework, get fit or improve our lives – or does it? Science is starting to show that the simple act of rest actually may affect your performance at work, your daytime energy levels, your weight and cardiovascular health, your relationships and mood, and so much more. It is hard to think of another single activity you can do that packs as many benefits as quality sleep, and thanks to scientific research, many people and major companies are starting to take notice. Whether you can get sufficient rest at night or feel best when you take a quick afternoon nap, it is clear that sleep is one of the best things you can do for your body and mind. Take a close look at your schedule and habits to make sure you are getting the best sleep possible, and next time you find yourself needing a nap after lunch, snooze without guilt knowing you are helping yourself and your work performance.