Are you and your partner sleep separated? You’re not alone

More and more couples are revealing that they are ‘sleep separated’ – also known as an arrangement whereby couples choose to sleep apart. Whether it’s in separate beds or entirely separate rooms, this growing trend is one worth discussing.

So, to see just how widespread sleep separation really is, we decided to take a deeper look into the trend, to try and uncover not only people’s reasoning for adopting it but also what benefits it can have for couples across America – including how it can impact relationships. 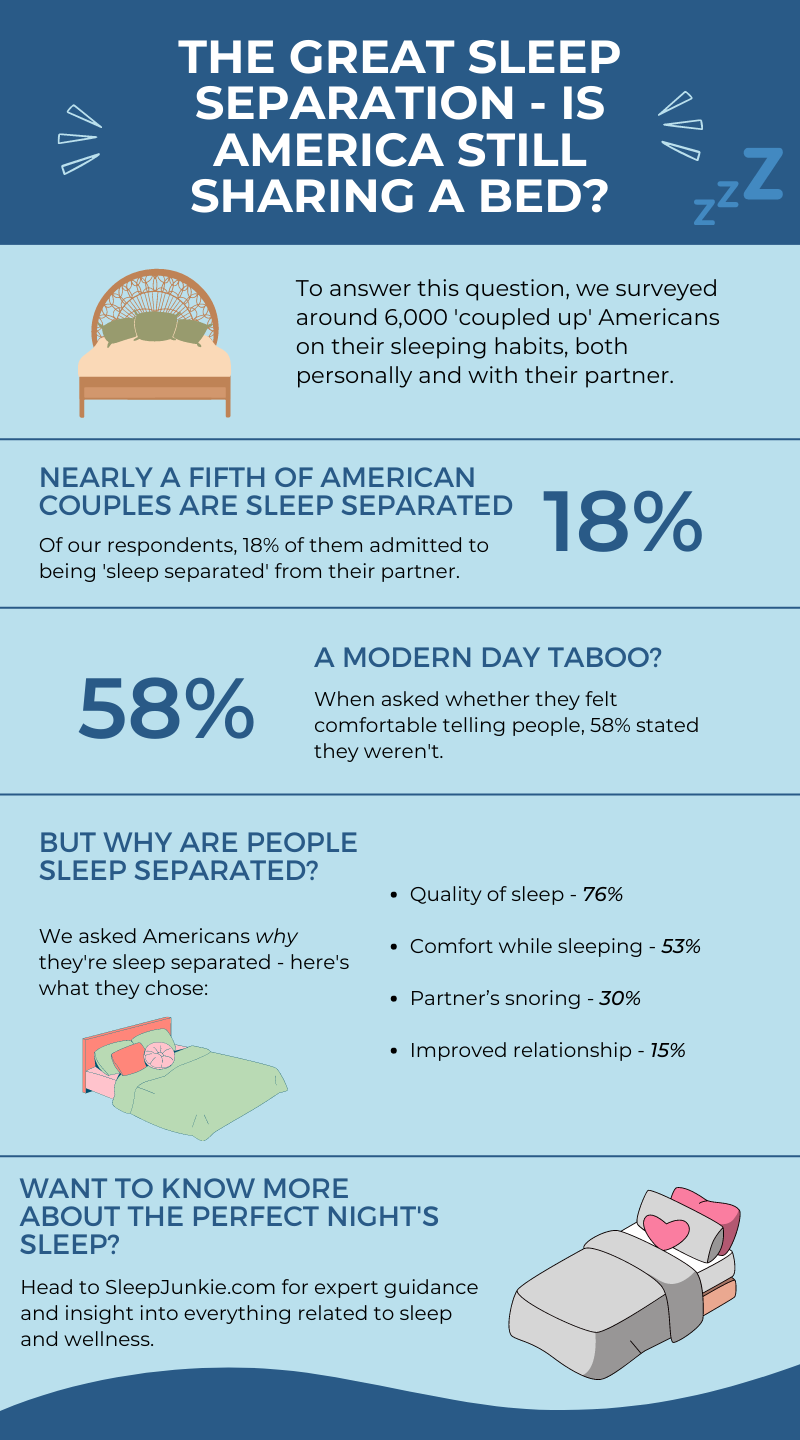 Our research began with a survey of roughly 6,000 Americans currently in relationships. Through this study, we found that 18% of American couples don’t currently sleep in the same bed as their partner, and use alternative sleeping arrangements at home.

Of the couples who don’t share a bed, more than half (53%) said they don’t feel comfortable admitting it to friends, family, or colleagues – meaning that statistically, one partner in every couple feels uncomfortable talking about sleeping apart from their significant other!

Interestingly, of those who do sleep in the same bed, more than a quarter stated that sleeping together ‘improves their relationship’ – which highlights each individual’s personalized approach to sleeping. We’re all different, and our bodies need different things.

Thinking a little more deeply into how sleep can impact relationships and overall happiness, we also found that divorce rates have been going down in the United States – and while we can’t point to a direct correlation, we believe the two may be related.

As a brand which has always been at the forefront of sleep wellness and overall happiness, we wanted to do something to tackle the taboo surrounding sleep separation, and so we decided to launch our ‘Sleep Separation Archive’.

Our aim is for this archive to act as a safe place for people to anonymously share their stories of sleep separation, and how it helped them. Whether that’s through better sleep, or improvements to their relationship, we want to give people the opportunity to better understand how sleeping separately can improve their lives.

We’re asking people to submit their stories and insights using the form below, which will be shared anonymously via a dedicated page on our website.

“Anyone who keeps up with news and popular trends will know that more and more couples are coming out and announcing they’re ‘sleep separated’, and so we wanted to see just how much the trend plays out across the general public.

“I have to admit we were surprised to see such a high percentage of couples admitting to sleeping apart, however, we were more concerned with the number who said they feel uncomfortable talking about it. That’s why we want to encourage people to come out as ‘sleep separated’, and help to remove the taboo currently surrounding the topic in the United States.”