If the thought of staying up late watching a movie or hanging out with friends after hours has you thinking “I’m too old for that now,” you’ve probably realized just how important sleep is for our bodies.

While you might associate staying up all night with the behavior exhibited when you were younger, rest might be more important during those formative years than as an adult.

Compared to the recommended seven to eight hours of sleep you’re supposed to get when you’re older, experts recommend even more sleep for kids and teens. Those extra zzz’s aren’t just necessary to keep them from being moody or aggressive, but play a vital role in their ability to learn effectively, retain their studies, and keep sleep-related illnesses at bay.

So how much rest are high school students getting compared to the sleep they need, and what’s keeping them up at night? To find out, we used data from the Centers for Disease Control and Prevention’s (CDC) Youth Risk Behavior Survey from 2011 to 2017 on student sleep patterns. Read on as we dissect how much of an impact getting enough sleep has on students’ grades and their physical activity. 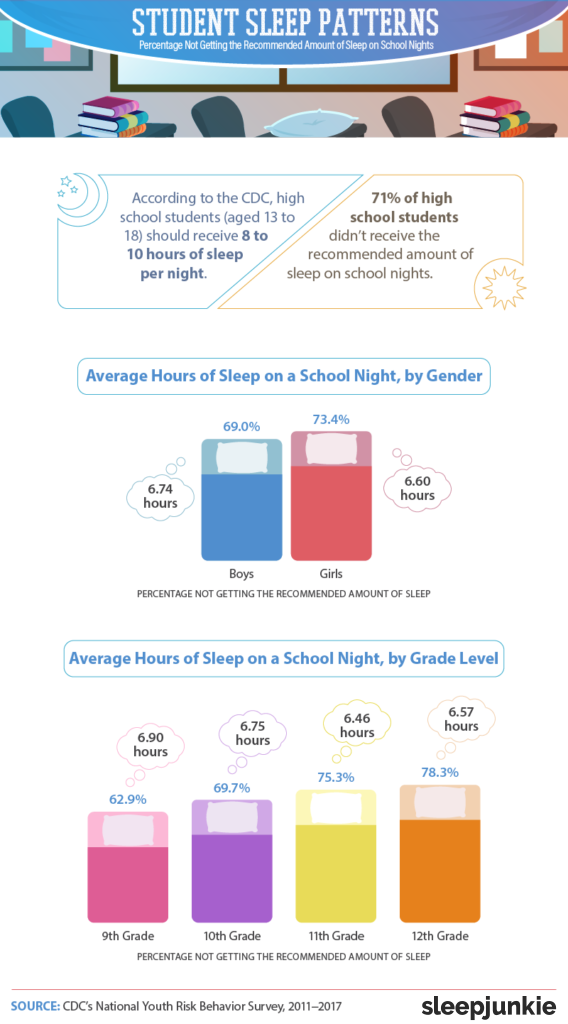 According to the CDC, high school students need between eight and 10 hours of sleep every night. If you think about rest like it’s food for the brain, you’ll have a pretty good idea of just how important sleep is to teenagers and their growing bodies. If they want to perform well on their tests, get along with their peers, and even play well on the field, sleep is crucial to students’ physical and mental health.

Despite the importance of sleep to virtually every aspect of high schoolers’ lives, the CDC found 71 percent of them didn’t get enough sleep on school nights. Averaging just 6.6 hours a night for girls and 6.7 hours for boys, a majority of students are missing the mark when it comes to their bedtimes.

Those bad habits could be something high schoolers are developing over time. With college applications and standardized tests on the line, junior year is typically regarded as the hardest year of high school, and students’ sleep patterns show it. Averaging less than 6.5 hours of sleep every night, over three-fourths of students in the 11th grade didn’t get the recommended amount of daily sleep. 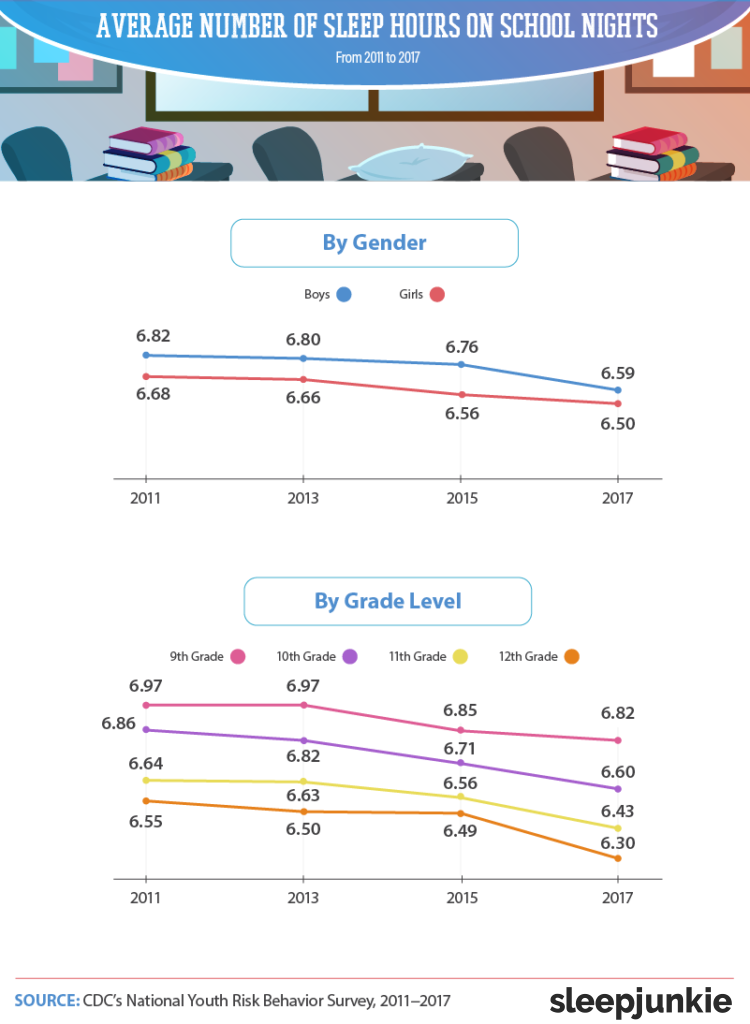 One possible explanation could be personal technology and the young age at which kids acquire these devices. Studies show that spending too much time in front of the computer or on your cell phone suppresses the natural production of melatonin and stimulates the brain and body in a way that makes it harder and harder to fall asleep. In 2017, one study found the average child under the age of eight spent 48 minutes every day looking at handheld devices, compared to just five minutes in 2011. 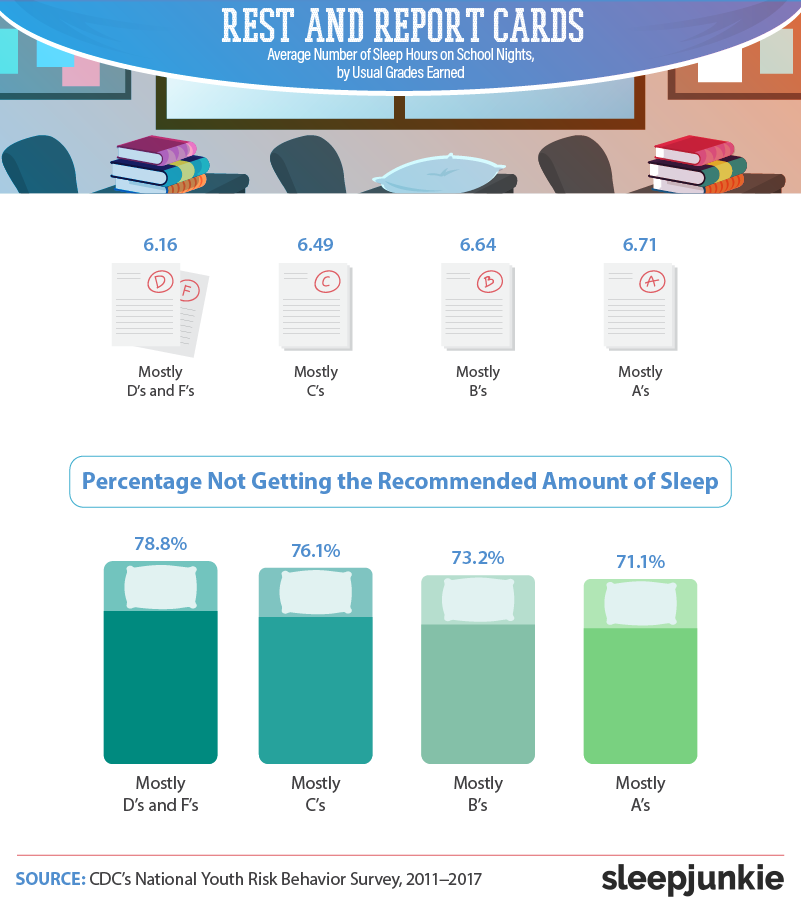 Research shows sleep is a pivotal part of the cognitive function, but what does that mean for high school students?

Just 30 minutes of sleep could be the difference between a passing grade and a failing score.

By looking at the amount of sleep students got on school nights, we learned those who slept the most, 6.7 hours every night, typically earned A’s in their high school coursework. However, students who typically earned D’s and F’s slept roughly 30 minutes less every night, averaging less than 6.2 hours of rest. While 71 percent of students earning A’s still didn’t get the right amount of sleep every night, the percentages were higher (nearly 79 percent) among students who got D’s and F’s instead. 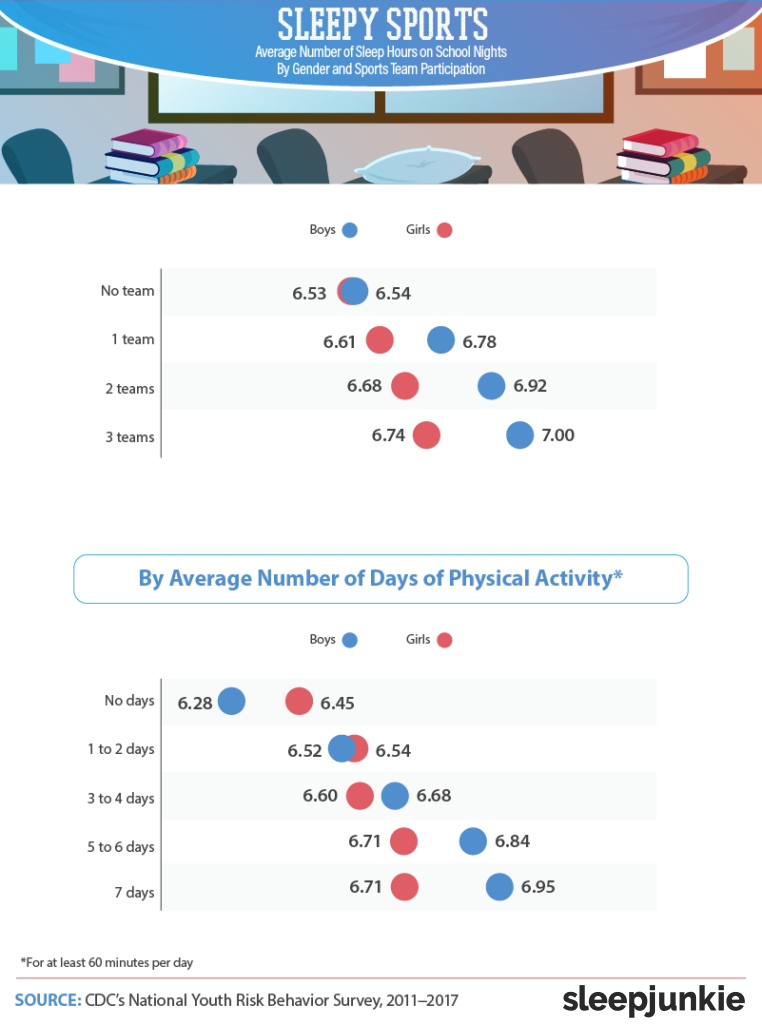 There are plenty of risks when it comes to students playing sports, even if they aren’t engaged in high-contact exercise.

Kids running track or cross-country face a higher risk of lower leg injuries, gymnastics can lead to numb wrists, and even swimming can lead to lung and breathing problems. For all these reasons and more, youth athletes typically need more sleep than the average student. Students contributing on the field as well as in the classroom use their evening rest to help manage performance, cognitive function, mood, and their grades on a daily basis.

According to the CDC, the more sports programs high school students participated in, the more sleep they got every night on average. Compared to students not playing any high school sports and getting roughly 6.5 hours of sleep on school nights, boys participating on three teams averaged seven hours of sleep a night. Among both boys and girls, being active five to seven days a week was more likely to lead to the highest amount of sleep every night – between 6.7 and seven hours on average. 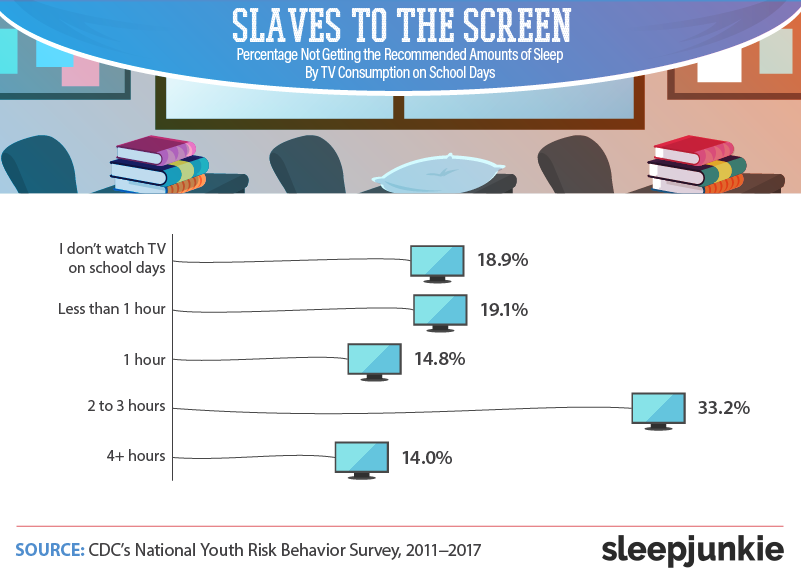 Even if you’re looking forward to the newest season of your favorite TV show, binge watching could be bad for your health.

Attempting to tune in for an episode before bedtime is one thing, but plowing through three or four episodes could be a clear sign you’re watching too much.

Among high school students not getting enough sleep at night, roughly 1 in 3 admitted to spending between two and three hours watching TV on school days. While about 19 percent said they didn’t watch any TV on school days, 14 percent of students juggled their school workload, the possibility of extracurricular activities, and four hours (or more) of TV every night before finally making it to bed. 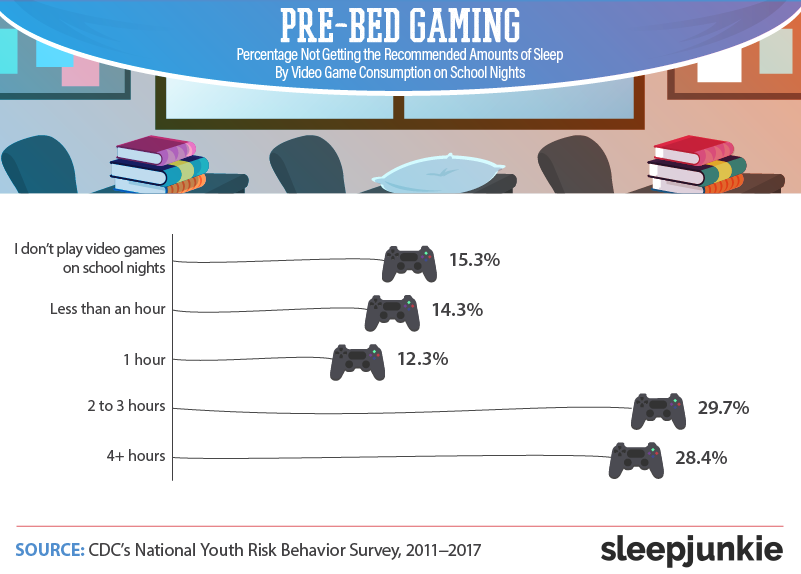 Across the country, almost every kid plays video games, usually to socialize with people they know in real life. Consequently, there’s a good chance that video games could be cutting into the routine sleep schedules of teens.

The Sleep They Need, the Distractions They Don’t

As we get older, clocking in a full night of sleep can feel like a luxury. Between our work obligations, family time, and the growing list of things to do around the house, sleeping in might not feel like an option.

For teens, sleep may be even more important, and just like adults, there are plenty of distractions that can get in the way of a good night’s rest. Spending too much time watching TV, playing video games, and dealing with the everyday struggles of high school life can often leave kids feeling sleep deprived; however, educating your kids on the importance of sleep and setting them up with a high-quality mattress can help them get the rest they need.

For this analysis, we pulled data results from the Centers for Disease Control and Prevention’s (CDC) National Youth Risk Behavior Survey from 2011 to 2017 to observe trends in high school students’ sleep patterns and the correlation between students not receiving the recommended amount of sleep on school nights and sports participation, TV consumption, and time spent playing video games. This data set presents nationally representative samples of students in grades 9 through 12 who attend both private and public high schools.

In this survey, computer usage is defined as operating a computer for something other than schoolwork, which includes but is not limited to: Xbox, PlayStation, Nintendo DS, and Facebook. Respondents were asked to describe the grades they usually earned in school within the past 12 months of taking the survey. Students were asked if they were physically active for a total of at least 60 minutes per day within the past seven days of taking the survey.

The data presented are limited to teens who attend school and, therefore, are not representative of all teens nationwide. The main limitation of this study is that not all questions were asked each year the survey was administered, but we maintained a sample size of at least 26 students per the smallest group throughout our analysis. The Youth Risk Behavior Survey is only conducted every other school year and relies on self-reported data.

Don’t want to sleep on this study? We encourage any noncommercial distribution and sharing of this analysis and any related graphics. No need to copy our paper – just make sure to include a link back to this page.