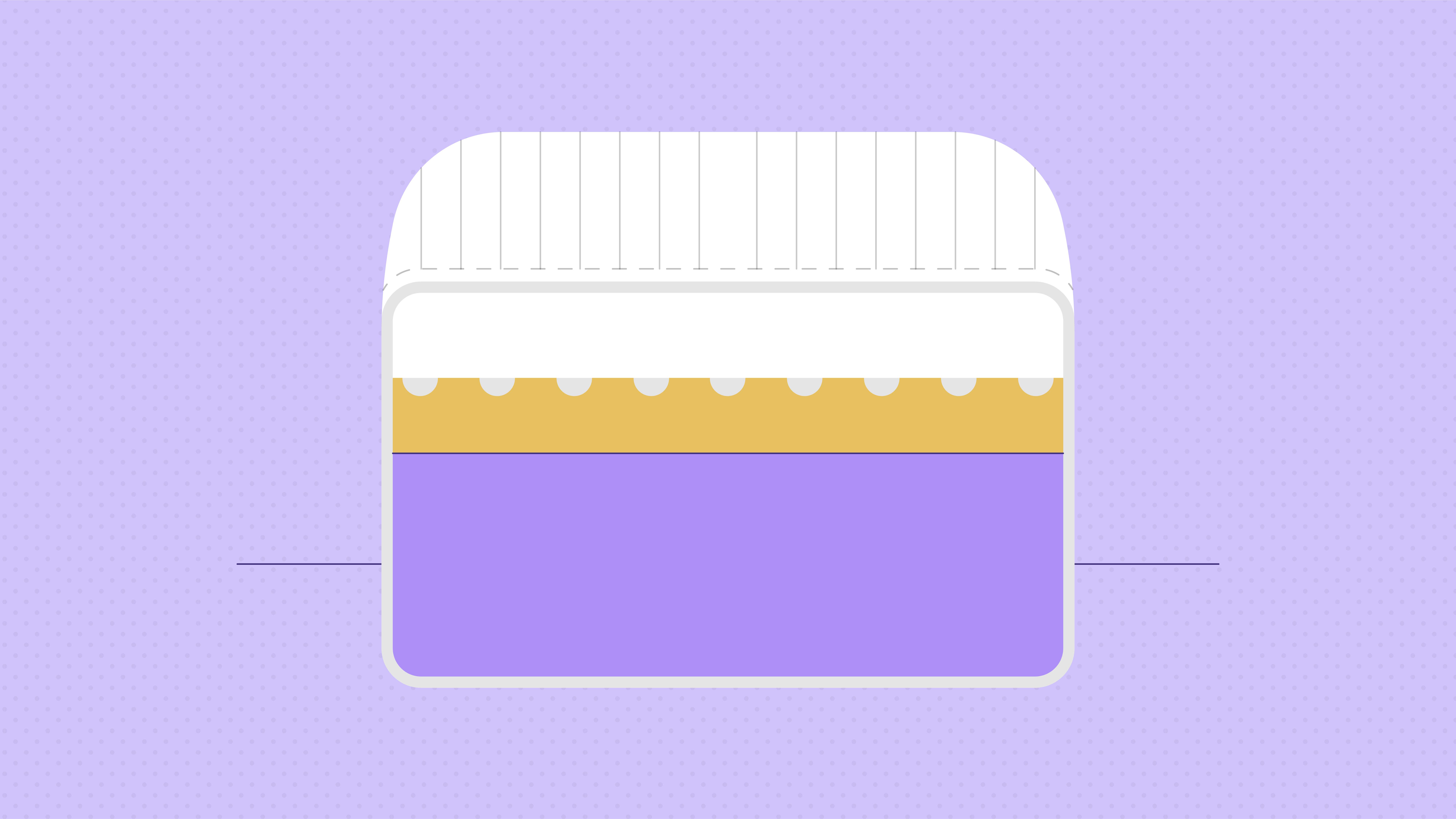 Memory foam’s ability to cushion and conform to the body makes it an ideal material for mattresses. However, memory foams are not all made the same. Their density affects how the foam feels and functions while you sleep. Density also plays a pivotal role in the longevity of a memory foam mattress. Our density guide is designed to help you find a mattress that will comfortably align your spine and satisfy your personal comfort preferences. It will also help you estimate how long the model you’re considering should last.

How Do You Determine Foam Density?

Memory foam has viscoelastic properties that allow it to stretch and change shape when under heat and pressure. Consequently, a memory foam mattress adapts to the unique shape of each sleeper even as they move throughout the night.

If you stay in the same sleep position, memory foam deepens its contouring to relieve pressure and further cushion the body. That’s why memory foam mattresses are known to reduce pressure at high-pressure points like the shoulders and hips. As you’ll see throughout this guide, the memory foam’s density affects the breadth and depth of these viscoelastic properties.

Foam density is measured in pounds per cubic foot or PCF. Higher-density foams have a higher PCF because they have more foam packed into a cubic foot than a lighter density foam. Depending on your personal preferences, dominant sleep position, and body weight, you may need different foam densities or a combination of densities to maintain comfortable support.

There’s some variation in these categories with some manufacturers considering foams with a PCF of four or below as low density and others not considering a foam as high density unless it’s above 5.5 PCF. These general ranges give you an approximate idea of what to expect in how the memory foam will feel and function.

However, memory foam mattresses are not made of a single layer of memory foam. They have multiple memory foam layers, and each layer often has a different density. Some models even have a mix of memory foam and poly-foam layers. Each layer and how it interacts with the surrounding layers will affect how the mattress supports the body, responds to movement, and dissipates body heat. You’ll need to consider the density of all the layers in relation to one another to give you an overall picture of the mattress’s long-term performance.

To do that, you’ll need to know the characteristics of the memory foams in each density category.

Traditional memory foam has been known to trap heat, overheating the sleeper. Low-density memory foams are less tightly packed, opening space for more heat and air to escape and making them more breathable. In addition, because low-density foams take less material to make, they’re less expensive to produce and, therefore, cost less. Many entry-level or bargain mattresses have more than one low-density memory foam layer.

Low-density memory foam does come with some downsides. Less foam per square foot means there’s less material to support the body. Some sleepers, like those with back pain or higher body weights, may not get the support they need from low-density foams.

High-density memory foam has a PCF of five or higher. The highest PCF you’re likely to see in a memory foam mattress is 8.5. These foams have the most amount of material packed into them, which also makes them the heaviest memory foams.

All that material still has the viscoelastic properties of the lower density foams, but you’ll experience greater support and tighter contouring because more material presses against and conforms to the body. High-density foams provide more lift and support for the spine, which may better accommodate those with back pain or heavier weight sleepers.

High-density foams are also the most durable. They may last ten years or more because it takes longer for the high volume of foam to break down.

At the same time, the tightly packed foam doesn’t leave as much space for heat to escape. Consequently, high-density foams can be too warm for sleepers who easily overheat. And, high-density foam is the least responsive. When you press into memory foam with your hand then remove it, it leaves an impression. In a high-density foam, that impression or “memory” will stay longer than it would in a low or medium-density foam.

That works perfectly well for some sleepers, but for others, it leaves them feeling stuck. Responsiveness is yet another reason that the most comfortable mattresses usually contain a mix of foam layers with different densities.

Many people assume that a high-density foam will feel firmer. Density plays a big role in how a mattress feels, but it is not an indication of the mattress’s firmness. When looking at firmness, you have to pay attention to the ILD or indentation load deflection. The ILD is determined by compressing a 15 x 15 x 4-inch piece of foam until it reaches 25 percent of its original height. If it takes 25 pounds of pressure to reach the 25 percent threshold, then the foam is said to have an ILD of 25.

Foams with an ILD below 19 are generally considered soft or plush, while those around or over 50 are considered firm. Everything in between is considered a medium-feel foam. Many mattresses, whether they are all-memory foam, mixed foam, or hybrids, have low-ILD memory foams in their comfort or top layers. These foams may also be low or medium-density to enhance responsiveness, conformability, and breathability.

Medium-density foams are also common in the comfort layers, but you’ll also find them in the mattresses transition layers for added support. However, the transition layer foams may have a low, medium, or high-density depending on the model.

It’s vital to understand that density does not indicate firmness, and ILD does not equal density. A high-density foam can feel soft while a low-density foam may feel firm. The opposite may also be true. It depends on the foams make and build. The density of the foam gives you a good indication of the mattress’s durability and support, whereas the ILD tells you how soft or firm it feels.

If you examine the density and ILD together, you’ll get a more accurate picture of what to expect from the mattress.

Everyone has a favorite sleep position. Your preferred position may influence what type of foam density feels or works best for you.

Side sleepers often benefit the most from memory foam’s ability to adapt to the curves of the body. It fills the curves at the waist while relieving pressure at the shoulders and hips. Memory foams of all densities work well for side sleepers because they all have the ability to adapt to the sleeper’s shape. However, restless side sleepers may want a mix of foam densities, so they don’t feel stuck in the mattress with predominantly high-density memory foam.

When looking for the best mattress for side sleepers, we recommend a bed that’s labeled medium in firmness, as these mattresses are designed to offer an even balance of comfort and support.

The spine of a back sleeper naturally stays in a neutral position, which makes finding a mattress easier than with some of the other sleep positions. Back sleepers can base their decisions on their preferred amount of cushioning and contouring. However, if you suffer from back pain, you probably need more high-density foams to provide adequate pain and pressure relief.

We don’t recommend stomach sleeping due to the extra pressure it puts on the lower back. However, you may still find yourself waking on your stomach. Stomach sleepers benefit from the extra support of high-density foam. They also tend to sleep better on firmer mattresses that don’t allow the hips to sink too deeply into the mattress.

Combo sleepers move through several sleep positions. They still need the support of high-density foam, but may benefit from at least one layer of a more responsive low or even medium-density foam to prevent that “stuck” feeling.

What is the density of memory foam?

Strictly speaking, density is an expression of a material’s mass per a given volume. A memory foam’s density refers to the amount of particles present in a cubic foot. When particles are close together it creates a higher density, while particles spread out in the mattress create a lower density.

How is memory foam density measured?

Companies determine a memory foam’s density by weighing a square foot of the material. Its weight is then divided by its length, width, and height. The answer is an expression of the foam’s density per cubic foot.

What is the best density for a memory foam mattress?

Every density has its pros and cons. Low-density foam can be a good choice for hot sleepers or those shopping on a tight budget. Medium-density foam is a good “middle-of-the-road” choice, balancing breathability with sturdiness. High-density foam is the best option for anyone looking for one of the most durable mattresses.

What is a high-density foam mattress?

A mattress made with high-density foams has a lot of particles packed into each cubic foot. The high amount of material the mattress contains makes it more resilient. High-density foam mattresses can also be difficult to move since more materials makes the bed heavier.

Can memory foam hurt your back?

Memory foam, like any other mattress material, can cause back pain if it’s firmness doesn’t match your sleeping position. Side sleepers should look for a medium to soft mattress, while back and stomach sleepers should consider mattresses with a firmer feel. Older memory foam mattress with worn-out support can also cause you to wake up with a sore back.

Most memory foam mattresses have several foam layers with different densities. Based on your needs, you can narrow down your choices by looking at the mattress as a whole.

The density of each layer —support, transition, and comfort— comes together to affect how the mattress responds to your body. The right mattress can not only have you sleeping for a full seven to nine hours, but it could stay with you for a decade or longer.

Stacey L. Nash is a health, fitness, nutrition, and lifestyle writer. She applies her experiences as a mother, a runner, and a former high school and college athlete towards her research.

As a Seattle-based author, Stacey also holds a Bachelor of Arts degree in Communication from the University of Puget Sound.