From arranging classroom furniture to enhance the learning experience to setting up office space to promote productivity, choosing how to lay out a room is serious business. At work, for example, core design elements including wall color, overhead lighting, and individual privacy can reprogram the working mind to accomplish even more. In the classroom, it is recommended to arrange students’ desks in different configurations depending on the desired outcome (i.e. horseshoe layout to facilitate interaction, and cluster layout to increase collaboration).

So if we can supposedly improve our overall focus and optimize the way we relate to each other with the right spatial setup, how can we parlay optimized furniture arrangements into a better night’s sleep? Should your bed be against a wall, parallel to the door, beside the TV, or all of the above? And how do other elements like paint color and room cleanliness influence the quality of our zzz’s?

We surveyed over 1,000 people about their bedroom configurations and related elements and how those choices affected the restfulness of their sleep. Read on to find out how your current layout stacks up to our respondents’ favorite arrangements, whether the color of your bedroom walls passes the rest test, and if making your bed can make all the difference. 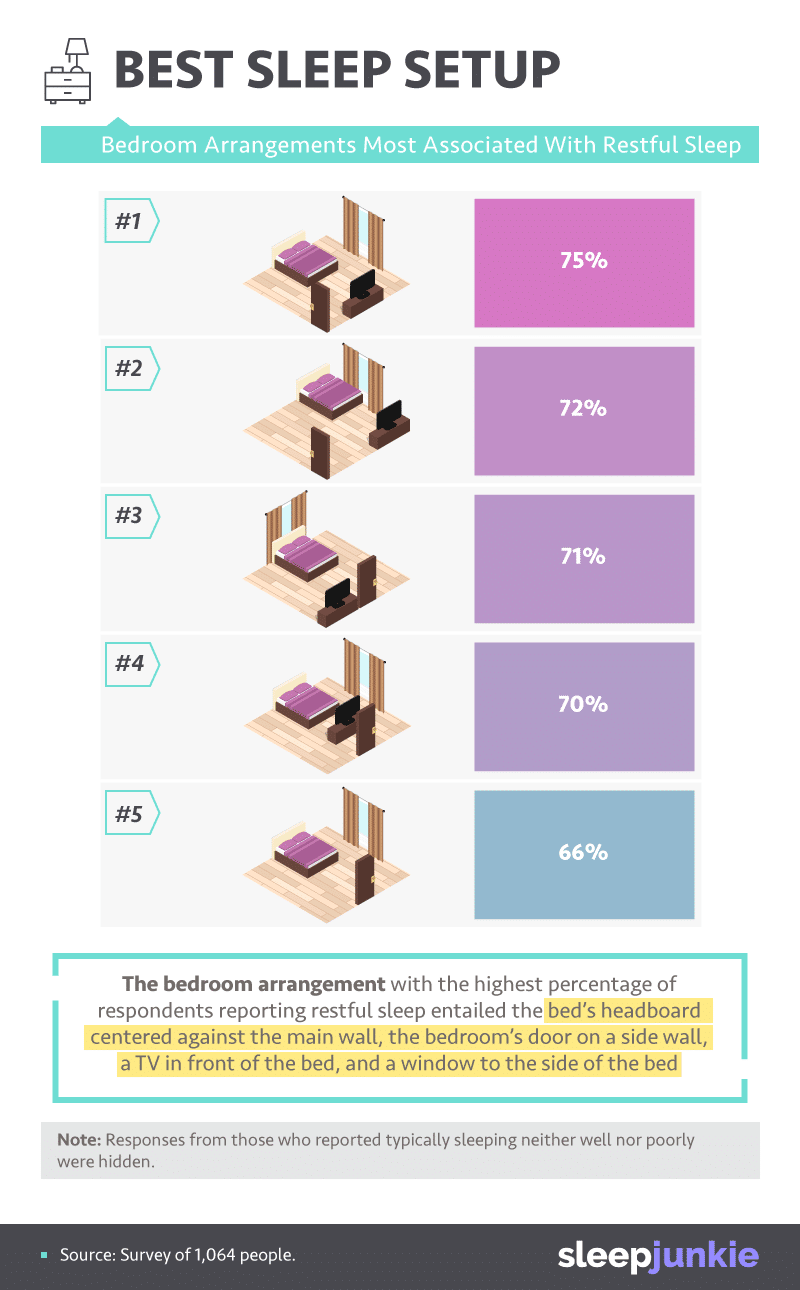 The setup that led to our respondents’ most restful sleep had their bed centered on the main wall (headboard against the wall) with the door on a sidewall, the TV across from the bed, and a window on the wall opposite the door. A nearly identical configuration, this time featuring the bed in the corner of the room as opposed to jutting out from the main wall, was the runner-up.

Those who like a little extra light in the morning might consider re-shuffling their furniture to mirror our respondents’ third-favorite option, which featured the bed’s headboard up against the main window. A little natural brightness can be a core component of a successful wake-up call: The presence of light alerts your brain that it’s time to rise and shine, as opposed to being jolted awake by an alarm while shrouded in darkness.

If you live in a corner of the world that experiences less natural light during the winter, have no fear. You can rely on one of the many sunrise-mimicking lamps on the market to gently nudge you awake. 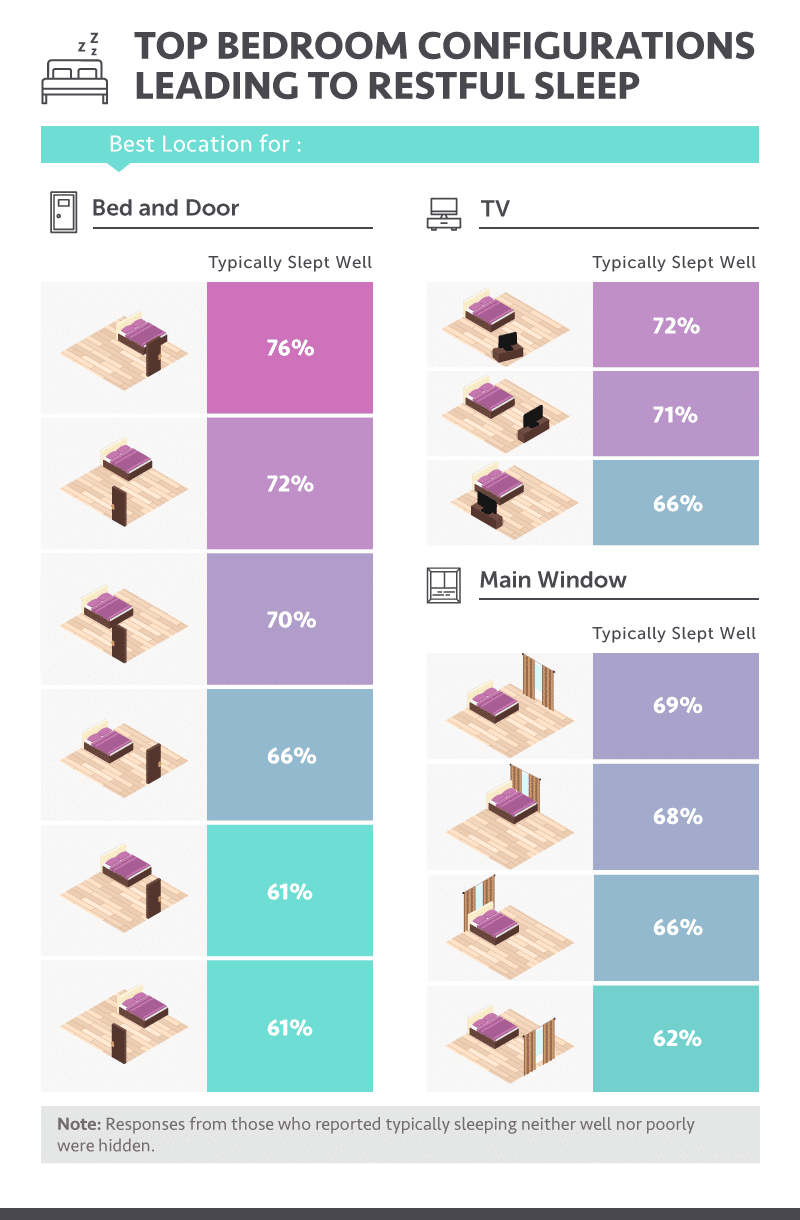 Bedrooms come in all shapes and sizes, and depending on the placement of certain indoor elements like heaters, closet doors, and windowsills, you might be slightly limited regarding possible furniture configurations. Here’s how our best-rested respondents arranged the individual components of their rooms.

Respondents who slept in a bed pushed up against a sidewall with the door at their feet reported the most restful sleep overall, followed closely by those with their bed tucked into a corner with their door on the parallel wall. People who placed their TV in the corner of the room and against the wall opposite their bed reported nearly identical levels of sleep satisfaction.

That being said, the presence of a TV in the bedroom might be a net detractor in terms of rest quality, regardless of where it is placed: Like any screen, TV is a temptation that can lead to staying up much later than initially intended.

When it came to windows, those who placed their bed beside a window (e.g., parallel to the window, on a perpendicular wall) reported the highest rate of restful sleep. Those who had their bed pressed up against the wall where their window was located were the runners-up. 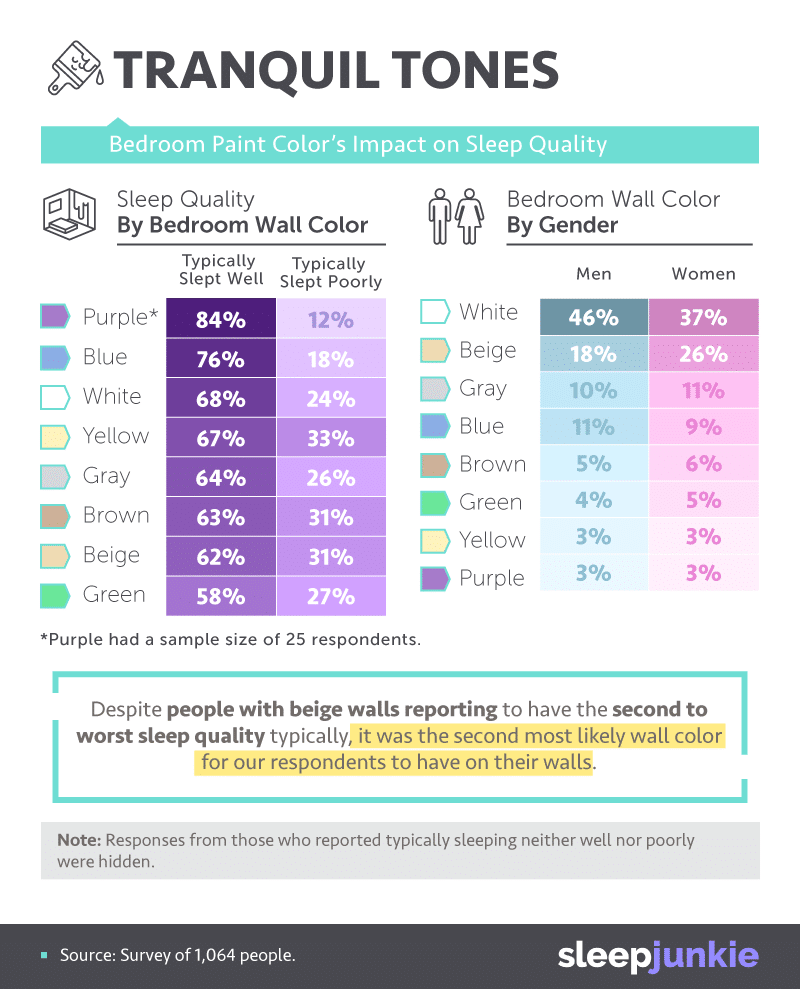 Choosing a paint color for your bedroom is so much more than perusing row upon row of swatches at the hardware store. It’s a known fact that exposure to certain colors can affect one’s mood: For example, red has been known to increase blood pressure and heart rate, while blue is associated with calm, focus, and soothing.

Our survey supported the latter observation quite strongly: 84 percent of people who dozed off in a purple bedroom said they typically slept well, with just 12 percent who slept poorly. Blue took a relatively distant second, with 76 percent of respondents reporting frequent, high-quality sleep. And while green-hued rooms yielded the lowest rate of restful sleep (58 percent), the number of people who typically experienced poor sleep in a green bedroom did not rank highest overall.

On the whole, women are more likely to experience sleep issues than men – so maybe it’s time for women to start re-painting their rooms? While the majority of both genders slept in white environments, more female respondents (26 percent compared to 18 percent of men) had a beige bedroom, which is the same color that yielded the second-lowest rate of sleep satisfaction. 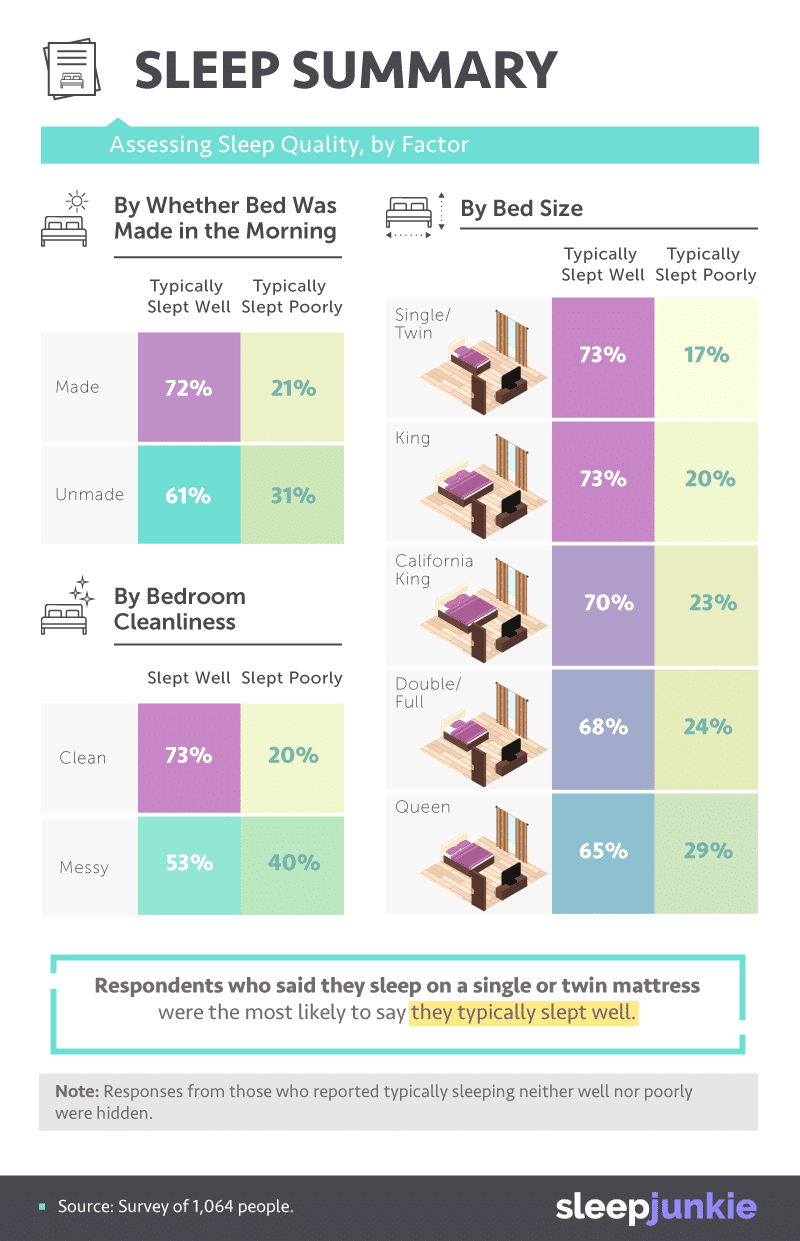 You would think that having more space to toss, turn, flail, and starfish would correlate directly with a better night’s sleep – but according to our respondents, a larger mattress wasn’t necessarily the key to restfulness. In fact, people who luxuriated on a king-size bed reported having an identical amount of high-quality sleep as those who slept on a single or twin. Seventy-three percent of both groups said they typically slept well, while 20 percent of king-sizers said the opposite (compared to 17 percent of single or twin sleepers).

There is, however, one factor that might tip the scales in the king mattress’ favor: Chances are, people sleeping in a single bed are not sharing it with someone else, which means not contending with all of their tossing and turning. Sharing a bed with someone, especially if that person has his or her own sleep-related issues, can take a toll on restfulness.

One way to favor restful sleep is, apparently, maintaining a tidy space: 73 percent of respondents with a clean bedroom said they typically slept well, compared to just 53 percent of messy folks. This spread marked one of the largest gaps in sleep satisfaction across our entire survey. People were also more likely to have a good night’s sleep if they made their bed in the morning.

So, as it turns out, there may have been some real value to your parents’ nagging demands to “clean your room!” Aside from promoting restful sleep, a tidy room can create a positive ripple effect on your life at large, from improving mental health to saving time when it counts the most.

Satisfying Sleep Is a Science

Many factors influence the quality of one’s sleep – but according to our respondents, if you want to stack the odds in your favor, the following steps are the overall key to great rest. Set your bed up in such a way that the TV is at your feet (or move the TV out of your bedroom completely), and have a window and door on either side of the bed, respectively. Then, paint your bedroom walls a purple or blue hue, get yourself a single or twin mattress (or dedicate part of your larger mattress as your sleeping section), make your bed every morning, and of course, clean your room!

Other effective room configurations include having your bed against the wall with the door at your feet, having the main window parallel to the side of your bed, and having the TV in the corner as opposed to at the foot of the bed. No matter how your room is laid out, though, here’s one more valuable tip: Restful sleep starts with the right mattress. But with all the mattress options out there, how do you know which one is the best mattress? That’s where Sleep Junkie comes in. Sleep Junkie is the definitive source for all things sleep, from reviews of the best bed in a box mattresses to the latest tips for practicing good sleep hygiene.

To qualify for the survey, respondents had to report they owned a bed.

There is a seemingly infinite number of ways that one can orient the furniture in their bedroom. Additionally, floor plans may differ significantly from one another to an extent that makes one bedroom setup impossible to recreate in another. We presented survey takers with several configurations for the bed(s), door(s), TV(s), and window(s) arranged in their bedroom and asked them to identify which one best represented their setup. Sleep quality and other data points from our survey rely on self-reporting, which is tied to certain challenges. These include but are not limited to the following: attribution, exaggeration, telescoping, and selective memory.

Is someone in your life struggling with sleep lately? Maybe they don’t have their bed oriented correctly. Feel free to share a link to this article for any noncommercial purposes.