Health experts have advocated the benefits of a solid seven to eight hours of sleep each night for decades. The amount and quality of sleep are important, but so is consistency.

Are people who adhere to a consistent sleep schedule – going to bed and waking up about the same time each day – happier and more successful?

The short answer is: Yes.

Is their overall satisfaction with life higher than those who don’t keep the same sleep schedule? What about their levels of physical, mental, and emotional health? How does sleep really impact these various aspects of life? To find out, we surveyed 1,000 people, half of whom said they retire and wake up at the same time every day. 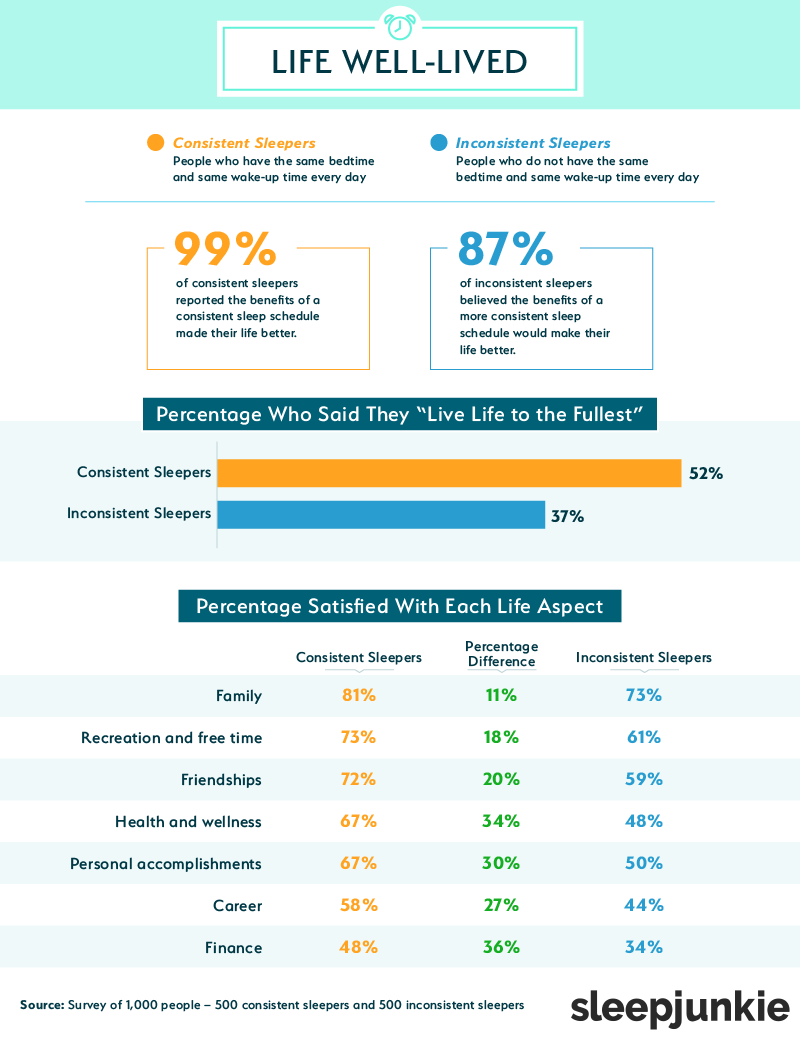 Every part of our life is impacted by sleep. Some of the areas we measured included family, leisure time, friendships, health, relationships, and careers. The largest difference between the two groups was in finance, at 36 percent, followed by health and wellness (34 percent difference) and personal accomplishments (30 percent difference).

Some people think working 16-hour days and sneaking in three to four hours of sleep whenever their schedule allows is the ticket to career advancement. However, our respondents painted a different picture. 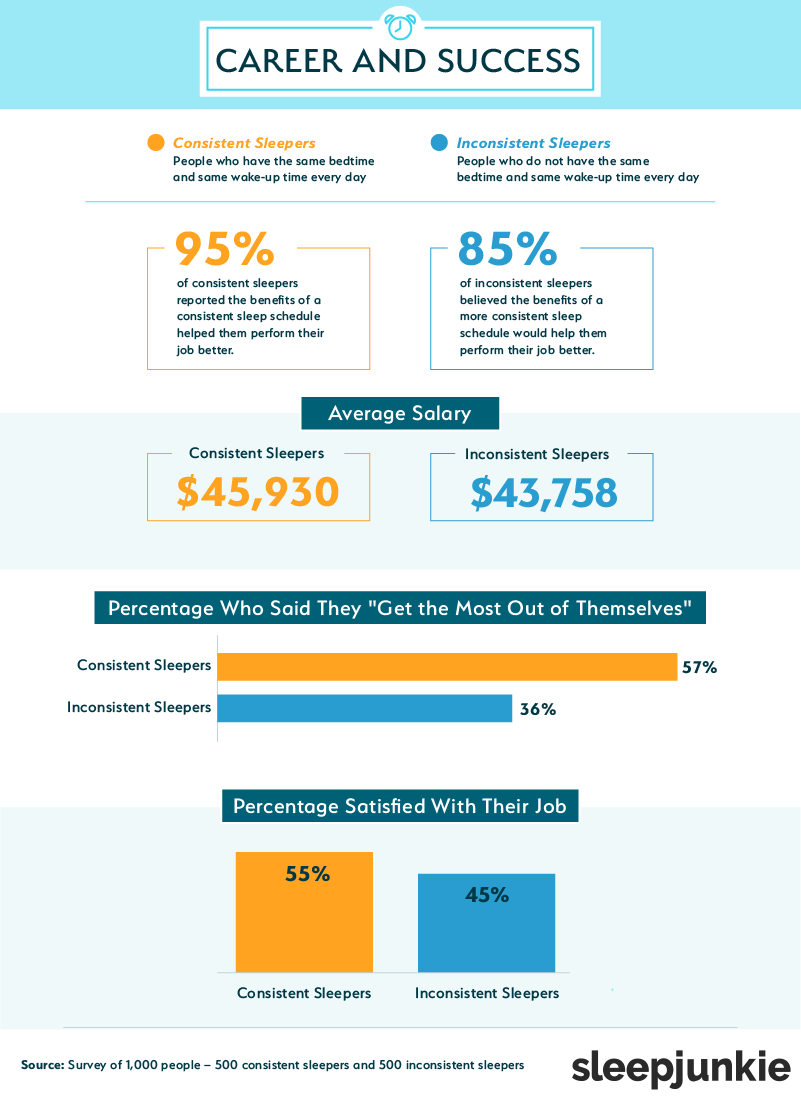 Consistent sleepers averaged slightly more than $2,000 in annual earnings compared to their colleagues with inconsistent sleep patterns. That’s an extra $80,000 more over a 40-year working career.

By a spread of 10 percentage points, respondents who maintained a consistent sleep schedule were more satisfied with their job than inconsistent sleepers.

The same is true for students, too. A 2017 study compared the sleep habits of Harvard undergrads to their academic performance. The students who observed consistent sleep schedules had higher grades than those who didn’t maintain regular sleep habits.

Even 85 percent of inconsistent sleepers acknowledged that their job performance would likely improve if they adopted a more consistent sleep schedule.

Sleep and Our Health

Consistent sleep seems to transition into other areas of life, such as health and time management, with consistent sleepers reporting a higher likelihood of being productive and taking active measures to maintain their health. 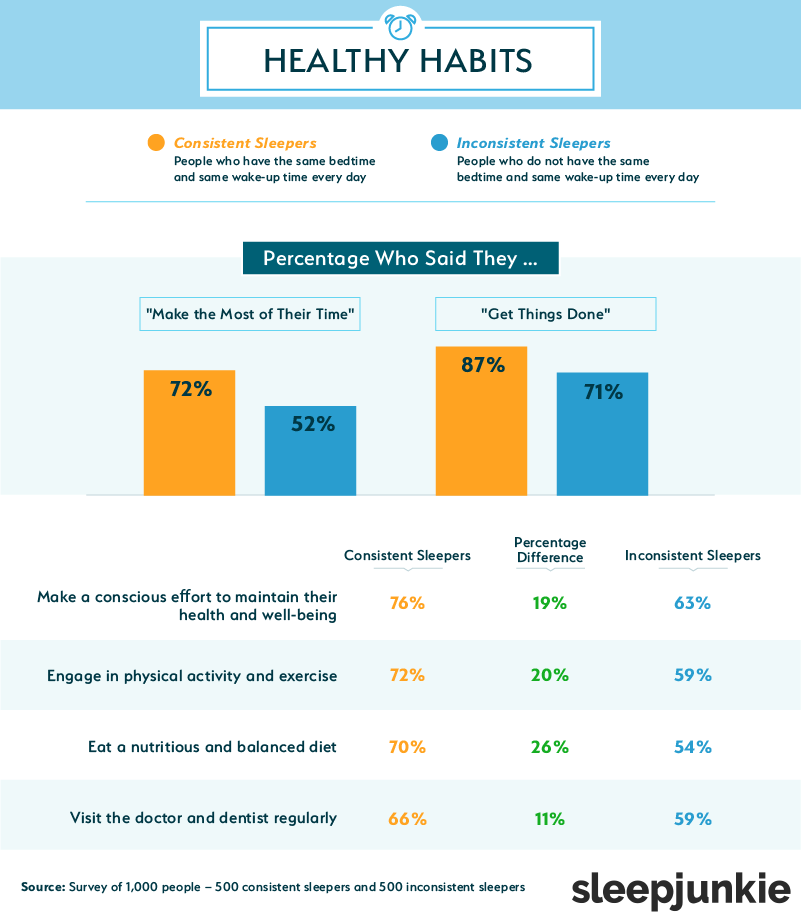 Consistent sleepers were much more likely to take care of themselves by forming healthy habits, engaging in exercise, eating well, and visiting their medical providers regularly.

Many reports on sleep focus on the number of hours, compared to consistency and other aspects like the amount of light in one’s bedroom or the bright lights on our smartphones and tablets. Yet consistent sleep patterns are recognized as being just as important as the amount of time a person sleeps.

Engaging in a regular exercise routine can reduce your stress level and even strengthen your circadian rhythm, leading to better sleep. The close connection between those two life aspects might help explain why nearly 72 percent of consistent sleepers regularly engaged in healthy physical activity, compared to only 59 percent of inconsistent sleepers.

Regular sleep patterns also contribute to productivity. Consistent sleepers in our survey were much more likely to “make the most of their time” and 87 percent reported they “get things done,” compared to only 72 percent of inconsistent sleepers.

How often have you woken up only to realize you’re still tired? There is a good chance inconsistent sleep patterns contribute to this problem. 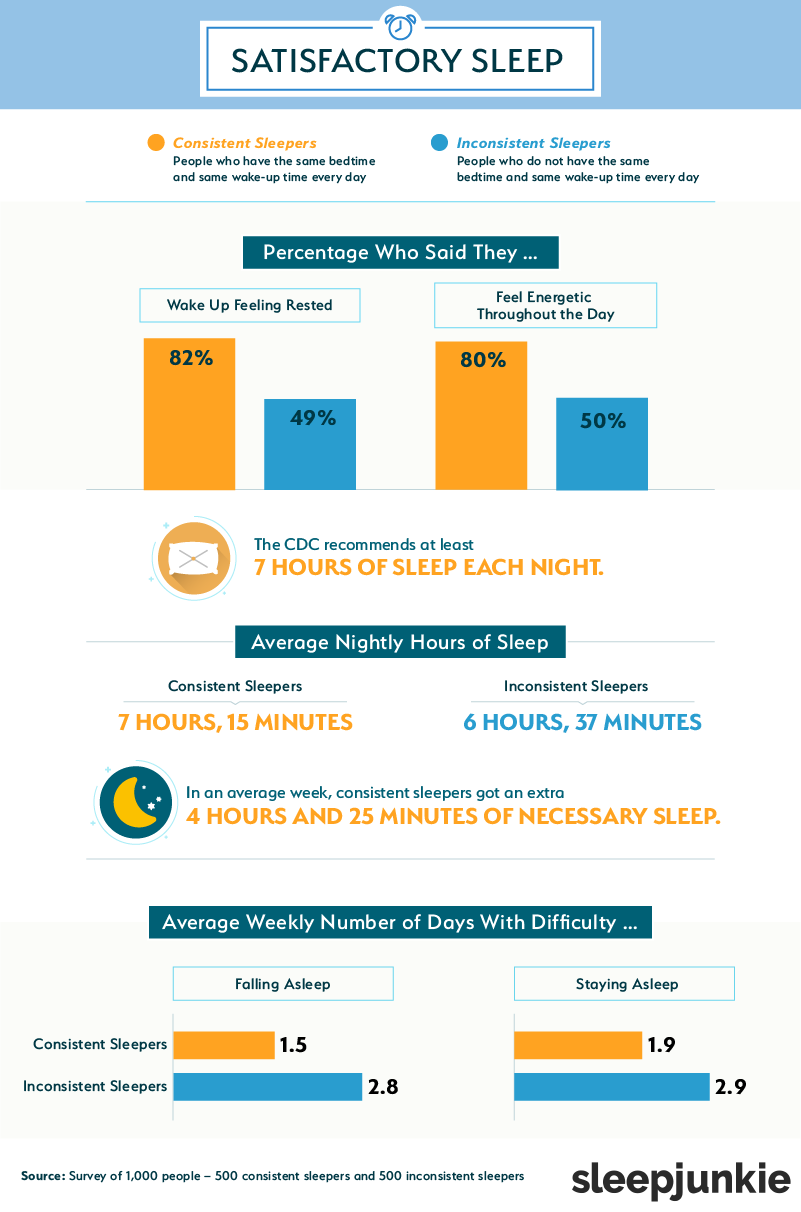 The Centers for Disease Control and Prevention (CDC) recommend adults sleep between seven and nine hours daily, depending on their age.

Our survey also confirmed consistent sleepers felt more rested when they slept within the CDC’s recommendations. Plus, they have less trouble falling asleep and reaching REM sleep, or the fourth stage of sleep commonly referred to as “deep sleep.”

Further, consistent sleepers only had trouble falling asleep an average of 1.5 days each week, compared to 2.8 days for erratic sleepers.

When consistent sleepers alter their typical sleep patterns – in essence, cheating themselves out of a restful slumber – often there are negative consequences. 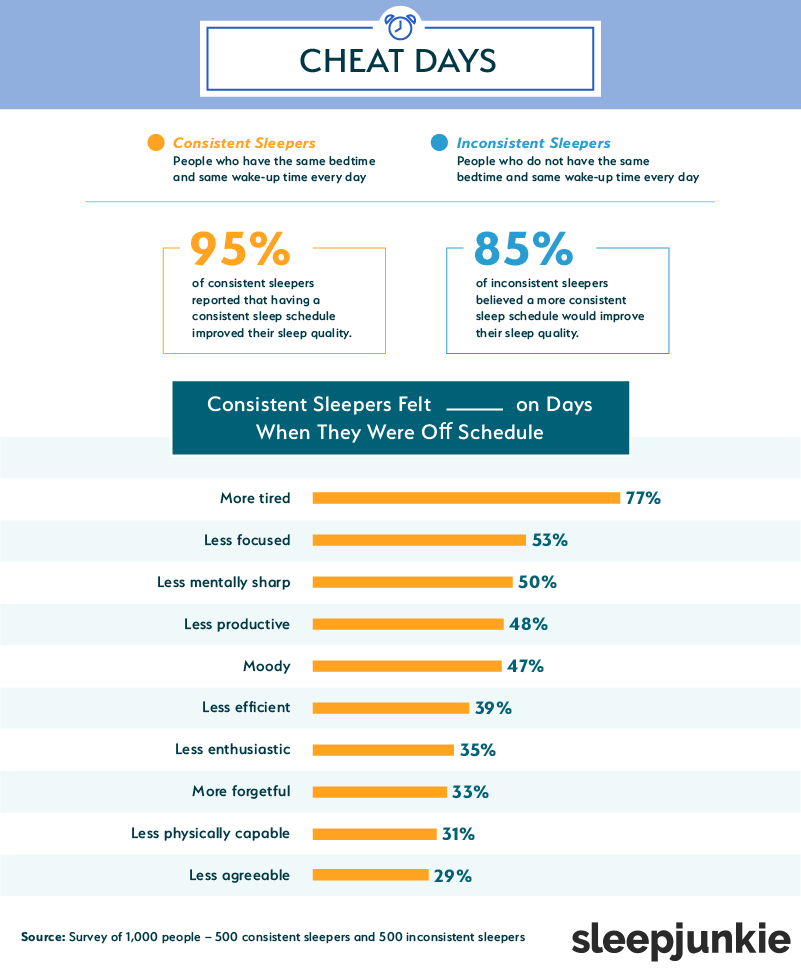 The first is feeling more tired, at least according to 77 percent of respondents who maintained a regular sleep schedule. Fifty-three percent were less focused, half weren’t as mentally sharp, and 48 percent were less productive.

Not only can altering a consistent sleep pattern impact your mood but it also can make people less efficient and more forgetful. And neither is beneficial for your career or family life.

The benefits of a consistent sleep schedule heavily outweigh an inconsistent schedule. At the top of the list is simply feeling more positive about life. 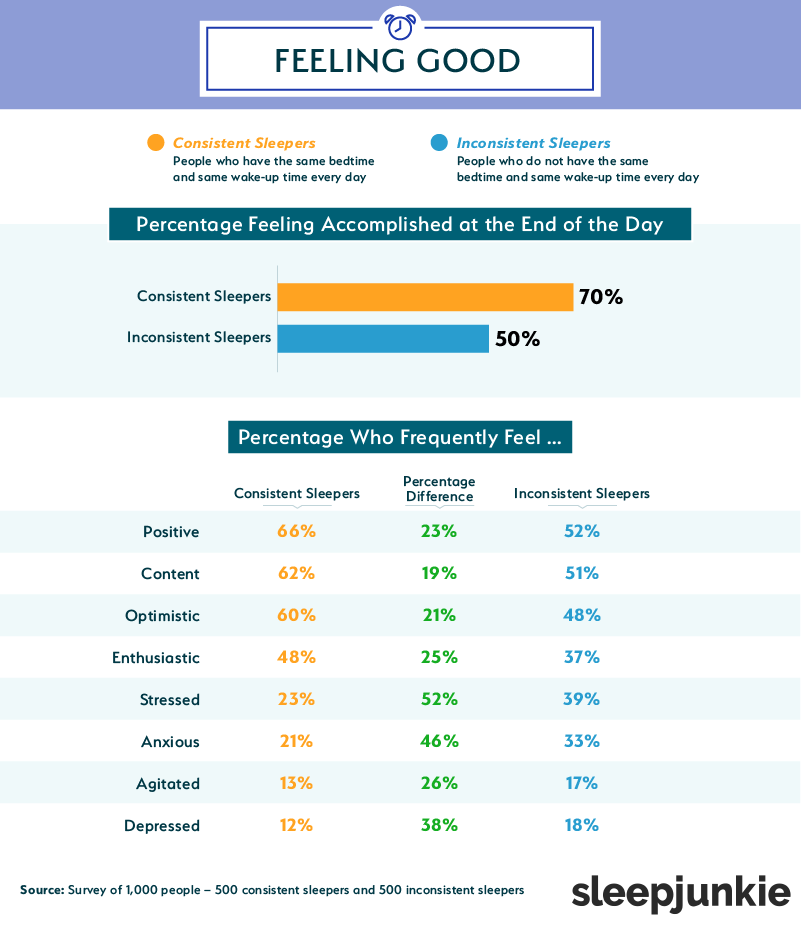 Hardly anyone desires stress and anxiety, the two areas with the most considerable percentage difference between the two groups. Depression and feeling more agitated certainly fall into this category, as well.

Two-thirds of consistent sleepers said they felt more positive, and almost as many reported being more content and optimistic. That should be reason enough for anyone to adopt consistent times for going to bed and waking up each day.

Of course, hectic work-related travel schedules can interfere with consistent sleep habits. And while napping on weekend days or other days you don’t have to work is one way to catch up on some sleep, napping too long can cause disruption to normal sleep cycles.

Creating an ideal sleep environment is also important. One great step is to adopt a pre-bedtime routine. Remember, avoid strenuous exercise too close to bedtime and keep light-emitting devices at bay before bed.

Selecting the best mattress should be a top priority, too. Here at SleepJunkie, we can help you choose the right one for your sleep style and comfort preferences.

The short- and long-term health benefits of a great night’s sleep are too good to pass up. Make it a priority to adjust your sleep patterns by going to bed and waking up at about the same time each day, and shoot for at least seven hours of sleep daily.

For this study, we surveyed 1,000 people via Amazon’s MTurk platform. This included 500 individuals who both woke up and went to bed at the same time daily and 500 who didn’t. All respondents were required to pass an attention-check question. In some cases, questions and answers have been condensed or paraphrased for brevity and/or clarity. In these cases, efforts were made to ensure that the respondents’ intents were accurately and fairly conveyed.

The data we present are for entertainment purposes only. Where appropriate, outliers have been excluded to maintain statistical accuracy. These data rely on self-reporting, and no statistical testing has been performed on the findings. Potential issues with self-reported data include, but are not limited to, the following: exaggeration, attribution, telescoping, and selective memory.

Are you thinking that consistently sharing this information on the benefits of consistent sleep is a good idea? As long as it’s for noncommercial purposes, we agree. Our one request is you link back to the original article in case your audience is interested in reading the details of this survey for themselves.