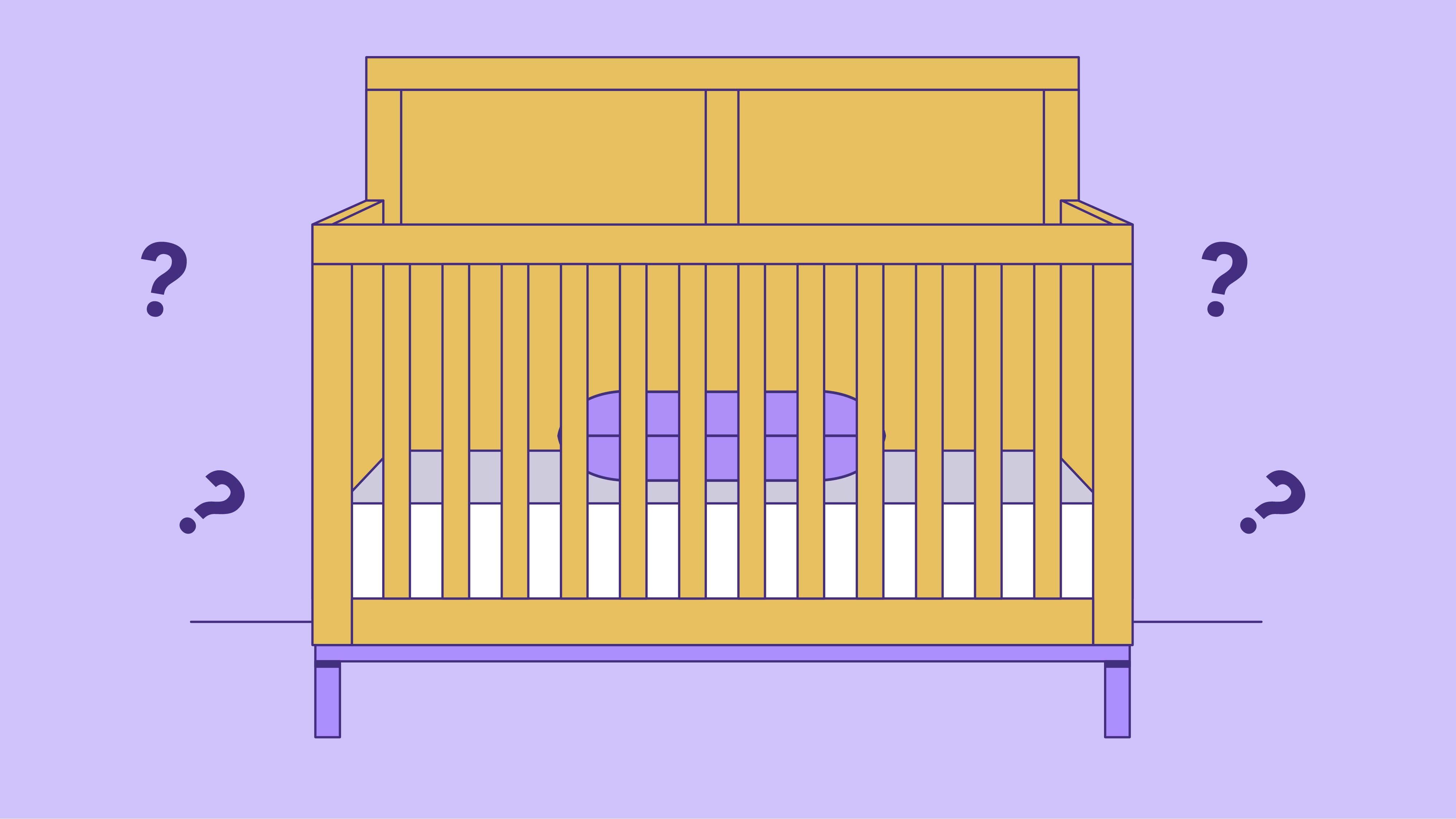 What Age Can a Baby Have a Pillow?

For the first few months of their lives, babies can’t sleep with anything. They can’t have pillows, blankets, or stuffed animals. While it might seem counterintuitive not to put lots of squishy, comforting things in your baby’s crib or bassinet, there’s actually an excellent reason not to do this: it’s dangerous.

If your face is smashed into the pillow to the point you can’t breathe, you just move your face or move the pillow. However, babies can’t move things that could suffocate or choke them as adults can. That means a pillow and even a lovey can pose a danger to your child during their first few months of life.

Reasons to Avoid Pillows for Infants

Pillows, blankets, and other plush items in the bed can increase the risk of suffocation and SIDS or Sudden Infant Death Syndrome. SIDS is the sudden and unexplained death of an apparently healthy infant, usually during sleep.

SIDS and accidental suffocation are not the same things. When babies are smothered by their own pillows or blankets, the cause of their deaths is known to be suffocation. The cause of SIDS is unknown. It could be one of several factors that have to do with genetics, environment, birth weight, and potential infections, but there are risk factors that increase your baby’s chances of succumbing to it. These include:

When is it Safe to Put a Pillow in my Baby’s Crib?

Research has shown babies should sleep without blankets or pillows until they’re at least a year old, though many recommend waiting even longer. The American Academy of Pediatrics (AAP) recommends you wait until toddlers are two years old before offering them a pillow.

The general rule is once toddlers transition to using a bed with a mattress for kids, it’s safe to use a pillow.

Many experts believe the best way for babies to sleep before they’re a year old is in your room with you, in their own crib, on their backs, with only a firm mattress and nothing else in the crib with them. That includes not just pillows but blankets, stuffed animals, and anything else plush that could smother your baby.

Others may say it’s fine to use a swaddle blanket or swaddle sleeping sack throughout the night. Sleeping sacks are preferred for longer periods because they let the legs move and minimize risks of hip damage.

Sucking on a pacifier during sleep may help reduce the risk of SIDS. Just ensure the pacifier you offer your child is free of cords or straps that can pose their own risks. If your baby doesn’t want the pacifier, don’t try to force them to take it. If the pacifier falls out of your baby’s mouth, don’t put it back in while they’re sleeping. 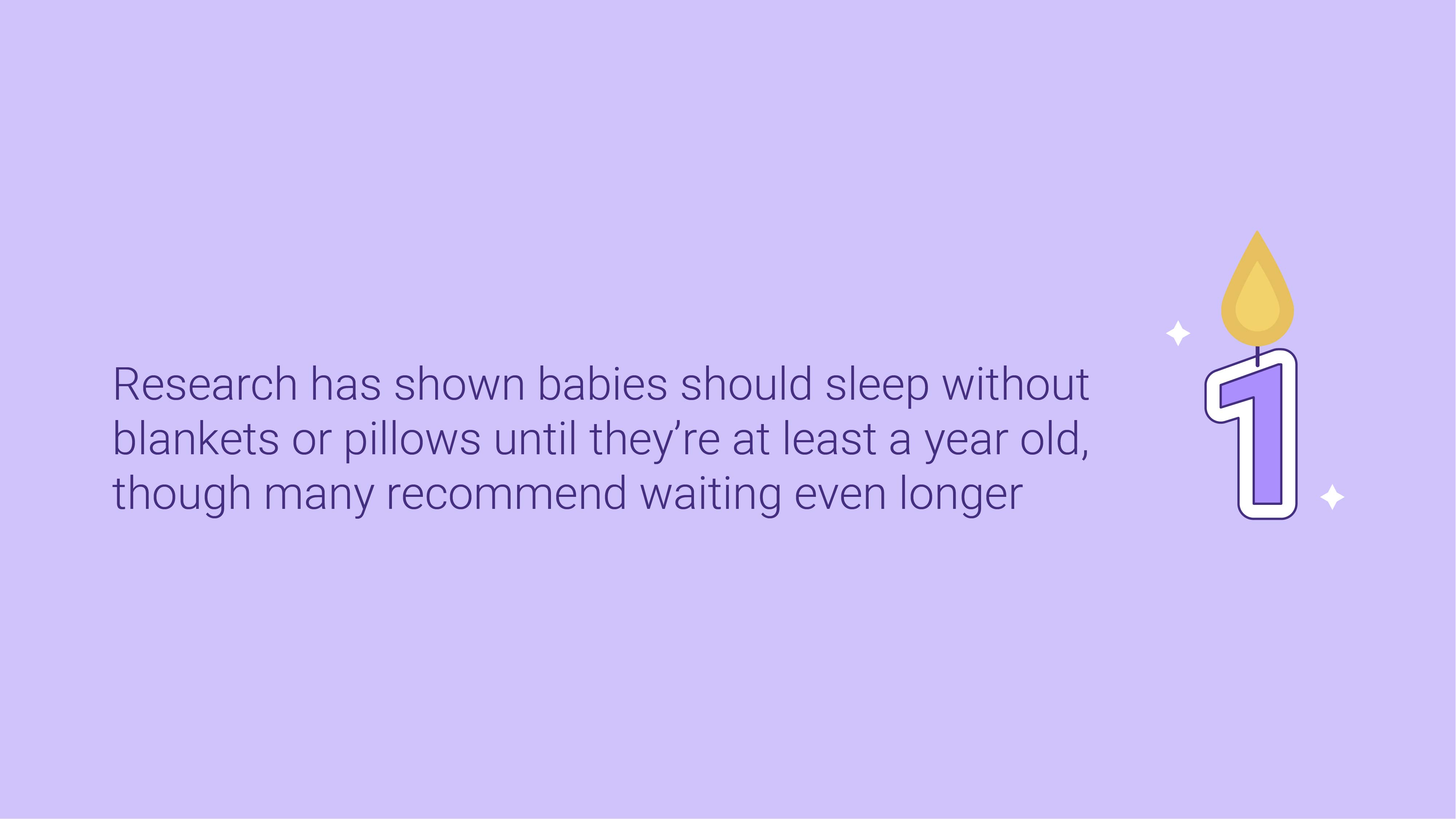 Best Kinds of Pillows for Toddlers

Once kids are two years old, the risk of SIDS is all but eliminated. Pillows and smaller size comforters also pose less of a hazard for toddlers than they do babies. However, even after your baby is old enough to use a pillow, it’s still best to avoid the same kind of pillow you might use for yourself.

The ideal pillow for a toddler bed is firm, thin, and made of hypoallergenic material that has not been chemically treated. Toddler pillows also need to be an appropriate size. An adult-size pillow still poses a strangulation hazard for toddlers.

Should I use a pillow for co-sleeping with an infant?

Technically, it’s better to avoid co-sleeping with your baby. Co-sleeping dramatically increases the risk of accidental death. Your baby could suffocate on your pillow, you could roll over on your baby, your baby could fall out of bed, and any number of other things could go wrong.

The best thing to do is share a room rather than share a bed. Safe co-sleeping means your infant sleeps in your room but in their own crib or bassinet. The AAP recommends you sleep this way for the first six months to a year of your baby’s life, as it is safer for them to be in the room with you rather than alone in their nursery.

If you really must have the feeling of co-sleeping, the only safe way to do it is by sliding a crib or bassinet up against your bed. This way, you can get the closeness of co-sleeping without putting your baby in danger of suffocation or injury.

Should a baby use a soft or firm pillow?

Toddlers need firmer pillows. Pillows that are too soft and don’t hold their shape still pose a suffocation hazard to toddlers, even those over the age of two. Toddlers necks’ have still not developed the kind of strength that older kids’ necks have. That means toddlers might not be able to lift their faces out of their pillows during sleep.

It also means that toddlers need firmer support to get proper spinal alignment. Go for firm pillows, but avoid ones that are too hard. A toddler may refuse to use a pillow that’s too firm to be comfortable.

What’s the safest way for my baby to sleep?

When babies are in their first few months of life, they need to sleep in an environment as free from suffocation and strangulation hazards as possible. That means babies should sleep in your room with you but in their own crib. They should have nothing in the crib except for a firm crib mattress and a tight-fitting crib sheet. They should sleep on their backs with a pacifier if they want one.

Why can’t babies sleep on their stomachs?

If your baby is old and strong enough to get themselves into the stomach sleeping position after you lay them on their back, don’t worry about it. If your baby can switch from their back to their stomach, they’ll be able to return to their back if they want.

Are crib bumpers a good option for infants?

Some parents think if they can’t use a pillow in their baby’s crib, they should use a bumper. A crib or cot bumper is a strip of plush padding that lies around the edge of a crib. Originally, bumpers helped prevent babies’ heads from falling between crib slats. However, slats in modern cribs are more expansive and not as far apart, eliminating the need for a bumper.

What’s more, the AAP recommends that parents never use a crib bumper. There’s no evidence they prevent injury, but babies can become stuck in them or suffocate on them. Thus, you should never use a bumper in your baby’s crib.

Most of us don’t think of pillows as something that could ever be dangerous, but for babies, they’re quite hazardous. Children under two should not have pillows, bumpers, or other soft bedding. It’s best to wait until they’re using a big-kid bed to introduce those things.