Sound the Alarm: The Tones and Trends of Waking Up

Face it – your relationship with your alarm clock most likely deserves an “it’s complicated” status on Facebook. The alarm is only following your commands, but it still feels like the ultimate betrayal when eight (or fewer) hours later it yells at you to hop out of your comfy bed and start the day. Not cool, alarm clock … not cool.

We surveyed over 2,000 people to understand America’s relationship with alarm clocks. How are we setting our alarms? Have smartphones replaced the standard alarm clock? If we’re going to have to get out of bed, what songs or tones do we want to hear? Keep reading to find out. 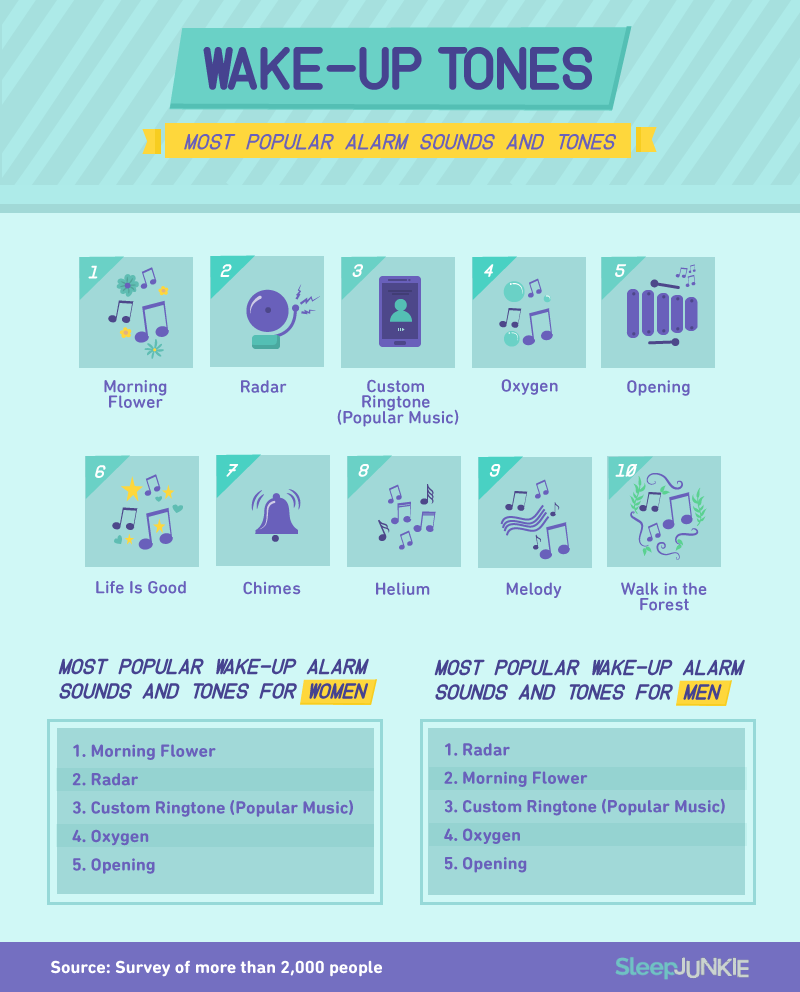 The first thing we looked at was the most popular alarm sounds and tones. The top two choices, Morning Flower and Radar, are default alarm tones for two of the largest manufacturers of smartphones, Samsung and Apple.

Whereas women ranked Morning Flower as the sound that gets them up in the morning, men gave that honor to Radar. However, this doesn’t mean that men and women are only loyal to these trusty (albeit annoying) tones. Men and women were also fans of choosing a custom sound to bring them out of a deep sleep.

Clocks – There’s an App for That! 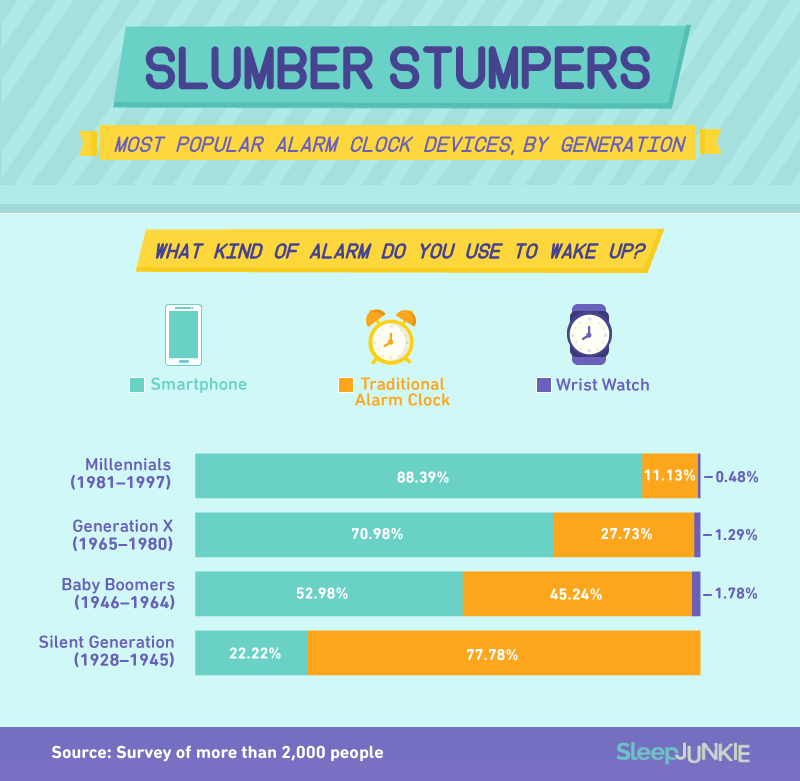 Smartphones have the ability to do almost anything – from eliminating a need for a physical wallet to helping us live a healthier lifestyle through fitness applications – and are making many objects, such as printed maps and flashlights, obsolete. Add the faithful sweet-dream killer, the alarm clock, to the list.

If you’re 35 years old or younger, there’s almost a 90 percent chance you’re using your smartphone as an alarm clock. Gen Xers are using a smartphone as their alarm clock over 70 percent of the time. Just remember not to slam it too hard when you’re trying to hit snooze, OK? 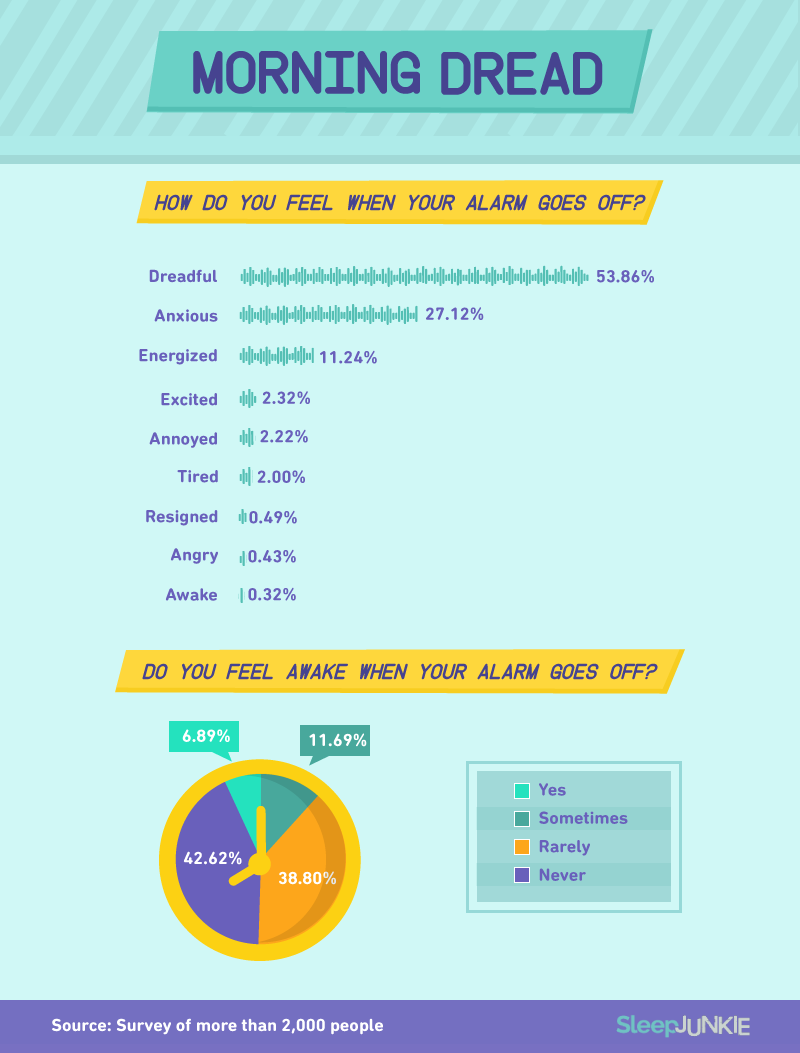 You’re just about to have all your wishes come true when a shrill “BEEP BEEP BEEP” firmly punctuates your dream and slumber, marking the start of your waking day. Close to 54 percent of respondents said the sound of their alarm clock gave them a feeling of dread. Whether it’s the uncertainty about what the day holds or just a fear of how cold it will be when the covers are kicked away, more than half of our respondents felt the same way.

Only 11 percent of those surveyed felt energized, while a mere 2.3 percent felt excited upon hearing their alarm. It looks like some respondents won’t let an alarm clock stand in the way of having a happy morning. 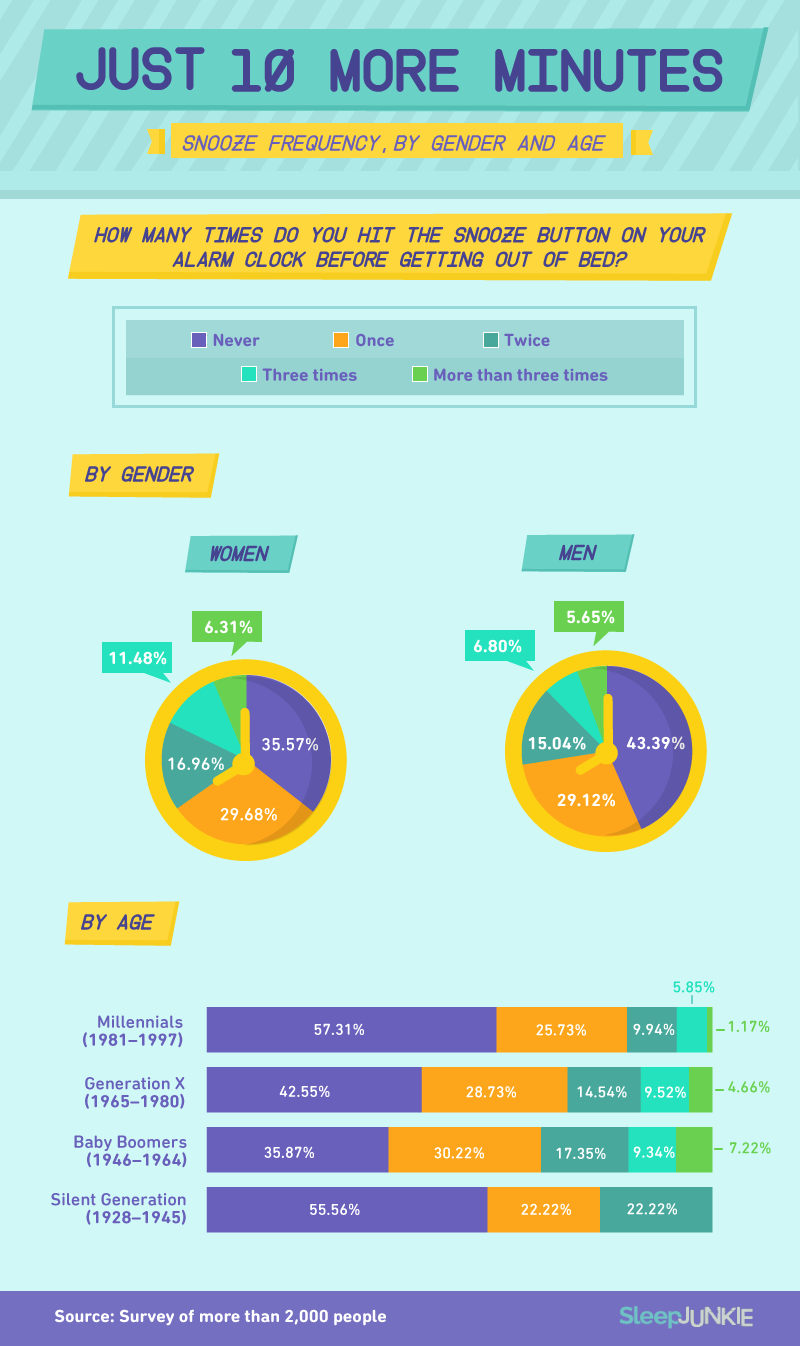 Yes, getting up in the morning is essential, but it usually never hurts to sleep an extra five or 10 minutes – take that, alarm clock! Surprisingly, over 35 percent of women and 43 percent of men have ironclad resistance against using the snooze button. Once they’re up, they’re ready to go.

However, 29 percent of men and women have no qualms about hitting the snooze button once for some extra beauty sleep. There is science behind snoozing too – depending on if you’re in light or deep sleep, an extra few minutes may be the best thing for you.

The silent generation and millennials were the only generations that skipped snoozing over 55 percent of the time. Baby boomers were the most likely to snooze once, at just over 30 percent.

Your alarm doesn’t always get the chance to summon you back to the waking world from a deep sleep. Sometimes, your roommate or significant other’s alarm clock beats you to it, and just a little earlier than you were hoping to wake up. There are no two ways about it – we find this behavior impolite.

In fact, almost 80 percent of those surveyed said that it was rude for another person to hit the snooze button repeatedly while in the same room. There might not be any laws preventing this behavior from happening, but clearly, most people think this is a common decency that can be violated.

Even though many people think it’s rude, it doesn’t often lead to conflict. Those who are married or engaged were the most likely to have an argument or disagreement with their significant other about the alarm situation, but still, less than 30 percent of those surveyed were affected. 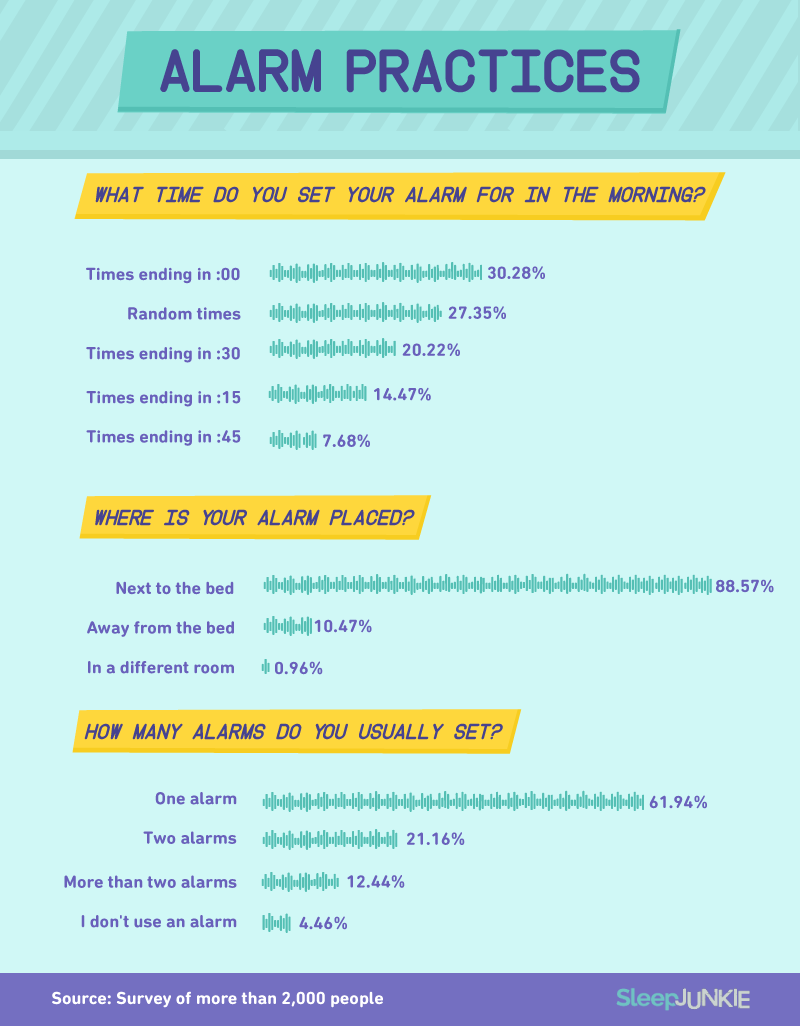 The most common alarm setup would be as follows: You set the alarm with a time ending in :00, place it in close proximity to the bed, and set just a single alarm to wake up in the morning. Based on our findings, this represents the most likely scenario when it comes to setting and staging an alarm.

Some respondents have an artistic flair for setting the alarm, however. Over 27 percent of people surveyed selected random times for their alarms. Of course, you could also be one of the lucky ones who don’t need an alarm to wake up. While this represents less than five percent of the individuals we surveyed, perhaps using alternatives, such as sleep trackers or light patterns, could provide a more natural rise.

Whether it’s helping us wake before the kids so we can start the day solo or make sure we’re on time for class or work, alarms play a necessary part in most of our lives. We might be divided on how we set those alarms, the tones we use to get us moving, or even the devices we program with our preferred wake-up times, but can we really argue that alarms are an evil force out to do us harm?

It’s up to us to put ourselves in the best position to get a great night’s sleep. sleepjunkie.com offers reviews of mattresses, information on different types of mattresses on the market today, and sleep tips to help you feel like a million bucks when that alarm goes off.

Here are samples of some of the top alarm sounds:

Sound the alarms and share our content with your readers for noncommercial purposes only. Just make sure to give our sleepy heads (or authors of this page) proper credit.

David Klose is a Certified Sleep Science Coach who is a full-time writer focused on sleep health and the mattress industry. David has personally tested hundreds of mattresses and is obsessed with helping others find their perfect sleep solution.

Through his research, David has learned about other contributing factors to getting a good night’s sleep – such as diet and exercise. He now focuses on writing articles to help improve the reader’s quality of life.

A non-exhaustive list of some of the topics he has written on: the causes of sleepwalking, the sleep habits of high school students, and the relationship between a good night’s sleep and living a successful life.

David Klose has his undergraduate degree from Arizona State University where he studied English Literature and interned as the Student Editor-in-Chief of the university’s online literary magazine. He is currently pursuing a graduate degree in writing from Lesley University.