The State of Sleep Tracking in America

Technology can play both the good and the bad guy when it comes to sleep. On the one hand, we may forgo sleep to finish streaming our favorite TV shows, but on the other, technology can provide us with greater insight into better sleep. Specifically, we’re talking about sleep tracking, where everything from sleep duration to quality, quantity, and even environmental factors can be monitored.

But who’s keeping track? We surveyed 1,007 people to find out. Some respondents chose to track their sleep, while others did not, but everyone had an opinion on the purported benefits and downsides of sleep tracking. Continue reading to see what they had to say and, perhaps, learn how sleep tracking can impact your life.

Many respondents took advantage of sleep tracking technology (37 percent). And of those who did, most took their tracking behaviors fairly seriously: Around a third checked their sleeping stats two to three times a week, and even more people checked their data four or more times per week.

Both millennials and parents were the most likely to track their sleep: Around 41 percent of each group used technology to track their health information while they slept. Millennials are known for their use of technology. Parents, on the other hand, might be in such dire need of quality rest that they’re more inclined to gather information about their sleep habits. Nevertheless, more than a third of Gen Xers and nonparents tracked their sleep, as well.

Our data revealed additional factors that may impact the likelihood of sleep tracking: money and education. Sleep trackers typically retail from $50 to $300, so at least some discretionary funds are necessary. While 45.8 percent of respondents who earned $50,000 or more annually used sleep trackers, only 31.8 percent of those who earned less than $50,000 said the same. A college education was also present among respondents more likely to track their sleep habits.

On average, respondents spent $147 on wearable sleep devices. The $40 that people spent on sleeping apps may seem inexpensive in comparison, but first, consider that the average app price is just 88 cents. That $40 sleeping app is 45 times more expensive than the average paid app. 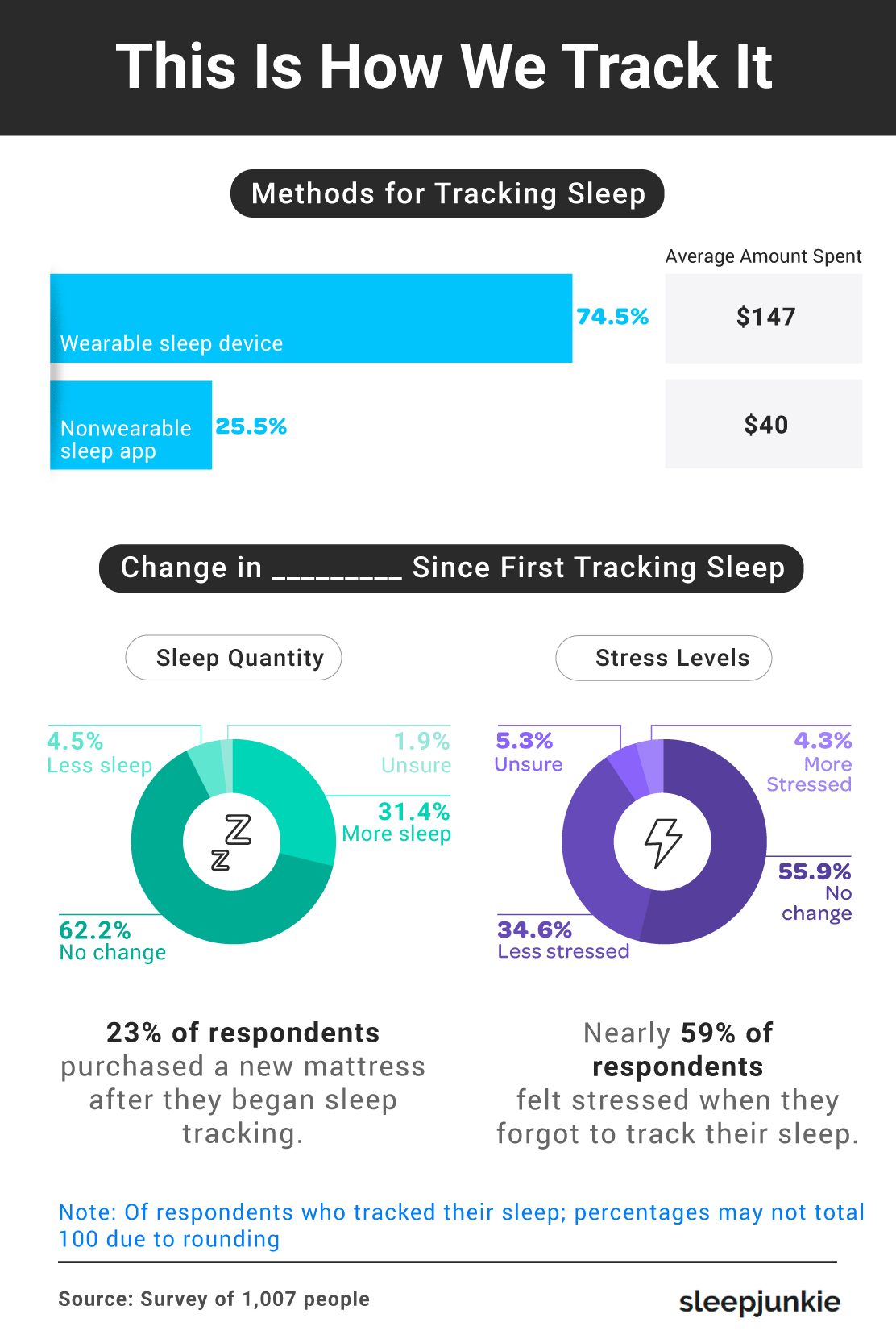 So are apps and wearable sleep devices worth it? If you suffer from stress or sleeping problems, the answer just might be yes. Over 31 percent were able to get more sleep after starting to track their sleep, while another 34.6 percent reported less stress. That said, nearly 59 percent of respondents felt stressed when they forgot to track their sleep.

There may be another cost to tracking sleep, however, and that comes from what you choose to do with your sleep information. Nearly a fourth of respondents bought a new mattress after they began tracking their sleep.

The clear majority –60 percent of those surveyed –believed it was beneficial to track their sleep. Most often, they mentioned a heightened awareness of their habits. Sleep problems were also identified by 55.8 percent of those who tracked their sleep. If you don’t have access to a sleep tracker, you can still manually record some of your sleeping behavior to track symptoms.

On a lighter note, 42.9 percent said they felt healthier after starting to track their sleep. Another 39.3 percent noticed their energy levels increased, and 29 percent found they were more productive throughout the day. The assumption here, of course, is that sleep tracking led to changes for the better regarding sleep quality and quantity. That assumption would hold true among respondents, as well: Tracking sleep correlated with an increased likelihood that respondents followed a bedtime routine, maintained a consistent sleep schedule, and felt refreshed upon waking in the morning.

When it came to physical health, sleep wasn’t the only thing respondents tracked. In addition to sleep, 67.3 percent monitored their weight, 63.6 percent tracked their exercise, 64.9 percent recorded their steps, and 59.3 watched their heart rate. Things like water intake, blood pressure, and diet were also monitored.

When it came to mental health monitoring, however, respondents were much less likely to track related data. For instance, mood was monitored by just 16.8 percent of sleep trackers. According to some health experts, monitoring your mood can be an incredibly effective way to understand and improve it, which makes our findings surprising, particularly among respondents who tracked everything from steps to blood pressure.

To Track or Not to Track

For some, sleep tracking isn’t appealing. The top reason for not tracking sleep, shared by 43 percent of respondents, was that the information wouldn’t help them sleep any better. Around 29 percent also said they weren’t interested in the information. Perhaps they’re one of the two-thirds of American adults that the Centers for Disease Control and Prevention says actually get doctor-recommended sleep, rendering sleep tracking useless for them. This sentiment was shared by 14.6 percent of people who chose not to track their slumber because they believed nothing to be wrong with their sleep.

Most people who intended to track their sleep had already done so, but there were a few still planning to get in on the game: 16.1 percent of respondents said they planned to purchase a sleep tracker in the next year. Again, these plans mostly involved wearing devices as opposed to using apps. Nevertheless, the majority of people who weren’t tracking sleep had no future plans to do so.

On Track to Sleep

We’re here to help you find any and all sleep information you may need to get that well-deserved night’s rest. From pertinent mattress reviews to best-available science and data behind sleep, Sleep Junkie is the perfect place to start.

In response to the survey results, Meg Riley, editor at Sleep Junkie, commented:

“There’s no shortage of benefits perceived when it comes to sleep tracking. The survey results indicate that people who track their sleep are more likely to follow healthier habits, such as maintaining a consistent sleep schedule or following a bedtime routine. Moreover, tracking health metrics, like sleep, weight, and exercise, can influence satisfaction with various aspects of life. If you’re interested in learning more about your sleep habits, sleep tracking might be for you!”

We compiled results from 1,007 Americans by administering online surveys via Amazon Mechanical Turk. Of the 1,007 people surveyed, 47.8 percent were female, 52 percent were male, and 0.2 percent identified as neither male nor female. Participants ranged in age from 18 to 80 with an average age of 38 and a standard deviation of 12. Those who failed to answer a carefully decoyed attention-check question were disqualified from our survey. The poll had a margin of error of plus or minus 3 percent at a 95 percent confidence interval. Outliers were identified and removed, specifically where money spent on sleep tracking devices was questioned.

As with surveys, the primary limitation of this study was the reliance on self-reporting. Self-reported responses may experience a myriad of issues that include but aren’t limited to the following: attribution, exaggeration, telescoping, and recency bias. Standard procedures were followed to minimize these influences throughout the survey design, data collection, and analysis.

Do you track your sleep, or are you at least considering trying? You’re welcome to share this data as long as it’s for noncommercial purposes and you link back to this page.