In the U.S., nearly 1 in 3 Americans suffers from symptoms of insomnia, and 1 in 10 has a chronic insomnia disorder.

From struggling to fall asleep to waking up throughout the night, losing out on quality sleep goes far beyond not feeling well-rested in the morning. From serious concerns like obesity and diabetes to reduced immune efficiency and mood disorders, the sleep we get at night helps keep our bodies strong and healthy.

With so many people struggling to fall asleep at night, we decided to poll over 1,900 Americans about the sleep aids they use to get a good night’s rest. From natural remedies like working out and stretching to over-the-counter supplements like ZzzQuil and Benadryl, we examined what worked and what didn’t. Want to know what we discovered about the effects – and side effects – of these popular sleep aids? Continue reading to find out.

The Best Ways to Fall Asleep

When you can’t get to sleep on your own, it’s not uncommon to turn to a sleep aid. Of the over 1,900 people surveyed about their sleeping habits, we asked them to rank their sleep on a scale of 1 to 10, with 1 being the worst sleep they’ve had, 5 being no change in their sleep, and 10 being the best sleep they’ve experienced.

Our survey concluded that daily exercise had the greatest impact on participants’ ability to get quality sleep on a regular basis. Research has shown that aerobic exercise can have a positive impact on even the most stressed sleep patterns and can also combat additional effects that can be attributed to insomnia, like anxiety and depression. Of those who said they regularly exercised, more than 1 in 4 rated their sleep a 7, and nearly as many rated their sleep an 8.

Antihistamines like Benadryl and ZzzQuil were also rated highly, with over 1 in 5 respondents ranking the effects of each a 7. Common side effects of these supplements can include constipation, upset stomach, or even mood swings that create a feeling of restlessness and confusion, so it’s important to weigh the pros and cons before opting for these types of sleep aids.

Natural, sleep-inducing tea was rated the lowest regarding effectiveness and quality of sleep by those polled, with about 1 in 3 rating it a 5 (no change at all).

Ways to Stay Asleep at Night 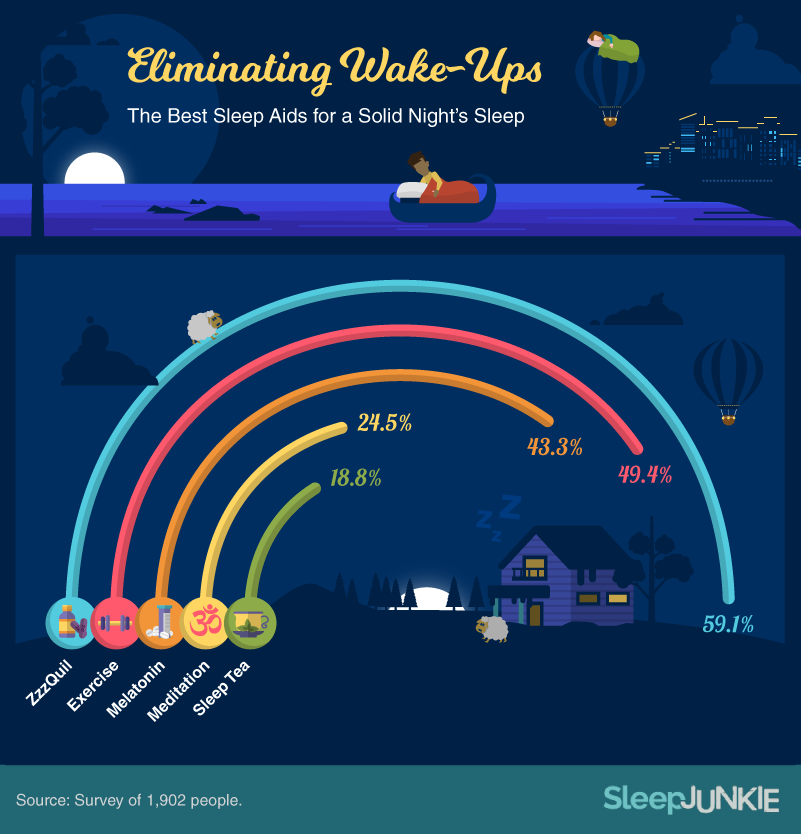 While sleep concerns may involve the inability to fall asleep for some people, staying asleep can be just as much of an issue for others.

Of the different sleep aids our participants were polled on, nearly 60 percent said ZzzQuil helped keep them in slumber after they initially fell asleep.

Close to half of those who said they regularly exercised also told us they had a solid night’s rest without waking up, and over 40 percent of those who took melatonin supplements said the same.

Other natural remedies like stretching and sleep-inducing tea were found to have the most minimal effect. While they weren’t as well-rated as sleep aids in general, they were rated the lowest regarding their ability to help respondents stay asleep once they finally dozed off.

Trouble Getting Up in the Morning 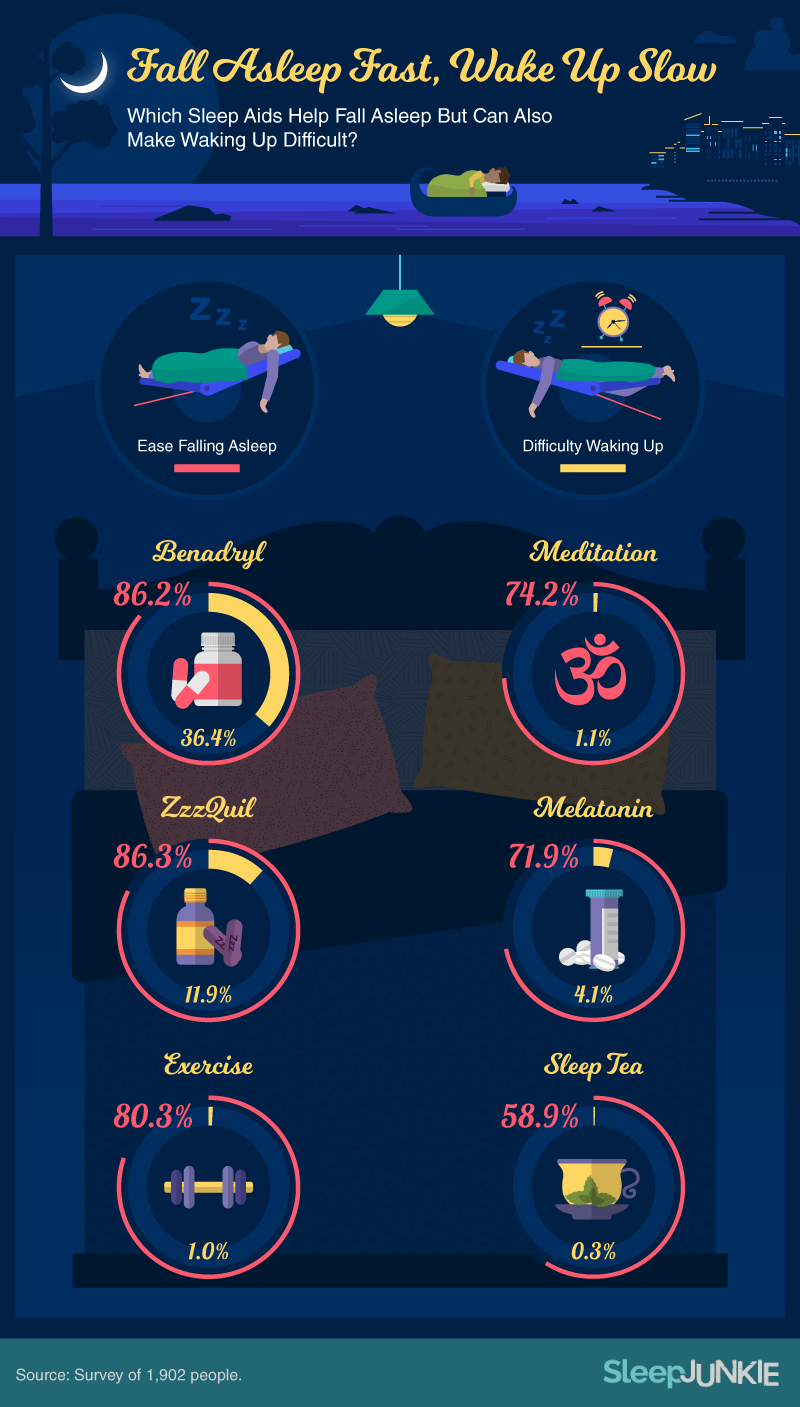 While antihistamines like Benadryl and ZzzQuil were rated highly in terms of their ability to help participants fall asleep quickly – and stay asleep – they also had the highest rating for making it more difficult to wake up. In particular, over a third of those who used Benadryl as a sleep aid found it hard to wake up the following morning. Because diphenhydramine can cause side effects like drowsiness, dizziness, and confusion, it can be among the slowest sleep aids to wear off after a full night’s sleep.

In contrast, natural sleep remedies like exercise, stretching, and sleep-inducing tea earned the lowest negative effect response from participants when it was time to wake up. Less than 2 percent across the board responded they found it difficult to rouse after ingesting them.

Taking the Bad With the Good (Night’s Rest)

Seeking out every last precious minute of sleep may be worth trying any remedy possible. But perhaps you should be looking toward natural solutions that require a little bit of sweat. Almost 80 percent of those surveyed shared they experienced no side effects when using exercise as a sleep aid. According to research, even those with chronic insomnia slept better after engaging in moderate-intensity aerobic exercise, such as a brisk walk, before going to bed.

As drowsiness is generally listed as a side-effect of diphenhydramine (found in Benadryl and Zzzquil), just over 50 percent of those we surveyed said they still felt drowsy the next morning.. Similarly, almost 40 percent also commented they struggled to wake up the next day. Relying on these solutions, rather than pursuing natural solutions that help even those with chronic issues, may lead to more tossing and turning than sweet dreams.

The Right Choice for the Right Amount of Sleep

Over 94 percent of those surveyed would recommend daily exercise as a way to improve sleep. Daily exercise was the only sleep aid in our survey with the highest percentage of respondents saying they would definitely recommend it as a sleep aid. The results of our survey indicate that exercise is the most efficient method of improving sleep without the use of risky prescription drugs.

Get the Sleep You Deserve

The reality is that millions of Americans are tossing and turning throughout the night, and consequences of these restless slumbers can be far more serious than you think. Insufficient sleep is dangerous and can lead to serious side effects in daily life, such as drowsiness while driving a car. Being awake for 18 hours is the equivalent of having a blood alcohol content (BAC) of 0.05 percent; 24 sleepless hours equates to a BAC of 0.10 percent – higher than the legal limit in every state. Because of the way sleep helps keep our bodies healthy, studies have shown that a lack of sleep can ultimately lead to a shorter life span.

While we found sleep aids like ZzzQuil and Benadryl helped people fall asleep – and stay asleep – they sometimes made it hard to wake up in the morning and were not nearly as recommended by those who have used them in the past as natural alternatives like regular exercise.

At Sleep Junkie, we believe better sleep means a better you. That’s why we’ve created tons of resources for sleep-seekers, from reviews of the best bed in a box mattresses to guides to getting great rest. Learn how you can get the best mattress today. Your body depends on sleep, and you can depend on Sleep Junkie to provide you with the best insight on getting the best rest.

Don’t sleep on the job; share our content for noncommercial purposes. Just make sure our sleep aid researchers get the credit they deserve by linking back to this page.

Dorothy Chambers is our in-house sleep expert and a firm believer in the benefits of a daytime nap. With a background in psychology, Dorothy is fully aware of the impact sleep has on our brain, mood, and overall well being. In an effort to help readers lead happier, more productive, and healthier lives, Dorothy spends her time researching the best sleep habits to help you fall asleep, stay asleep, and wake up feeling rested.

Dorothy Chambers spent years studying clinical psychology before joining us to promote a deeper understanding of sleep, along with some cursory research into biology and physiology. She’s particularly interested in the effects that different sleep positions have on the body.

Dorothy wakes up at 7 a.m. every day after a full night’s rest to better tackle a full day of work. After a session of morning exercise, she catches up on the latest sleep news and research before writing. Dorothy Chambers has written dozens of articles in her tenure with Sleep Junkie.