We’ve all heard it – there’s nothing like a good night’s sleep. And experts tend to agree, advocating our sleep habits have a direct correlation with how well we think, react, work, learn, and get along with others. But what about our waking habits? Are we repeat offenders when it comes to that snooze button? What is the first thing that pops into our mind most mornings? It turns out, our habitual morning routines greatly impact the rest of our day.

We surveyed over 1,000 Americans to discover their first thoughts upon waking, how many times they hit the snooze button, what times they turn in and get up, what their nighttime habits are, and how satisfied they are during the day. Keep reading to learn how your habits when rousing could be affecting your happiness and success. 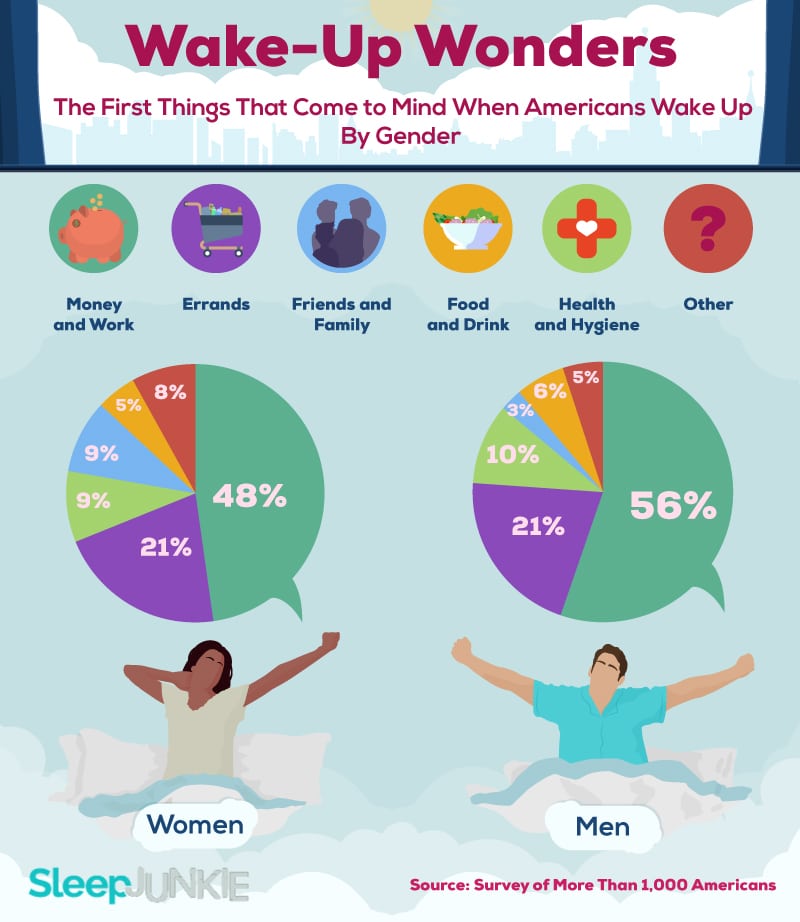 Rise and shine? More like rise and worry. We asked men and women to share their thoughts when first waking up. We discovered that the majority of men and women woke up thinking about money and work. Fifty-six percent of men woke up with these thoughts, compared to 48 percent of women.

Some other topics that came to mind were errands, friends and family, food and drink, and health and hygiene. Twenty-one percent of men and women thought about errands upon awakening. However, women were three times more likely than men to wake up thinking about their loved ones –9 percent of women compared to only 3 percent of men. 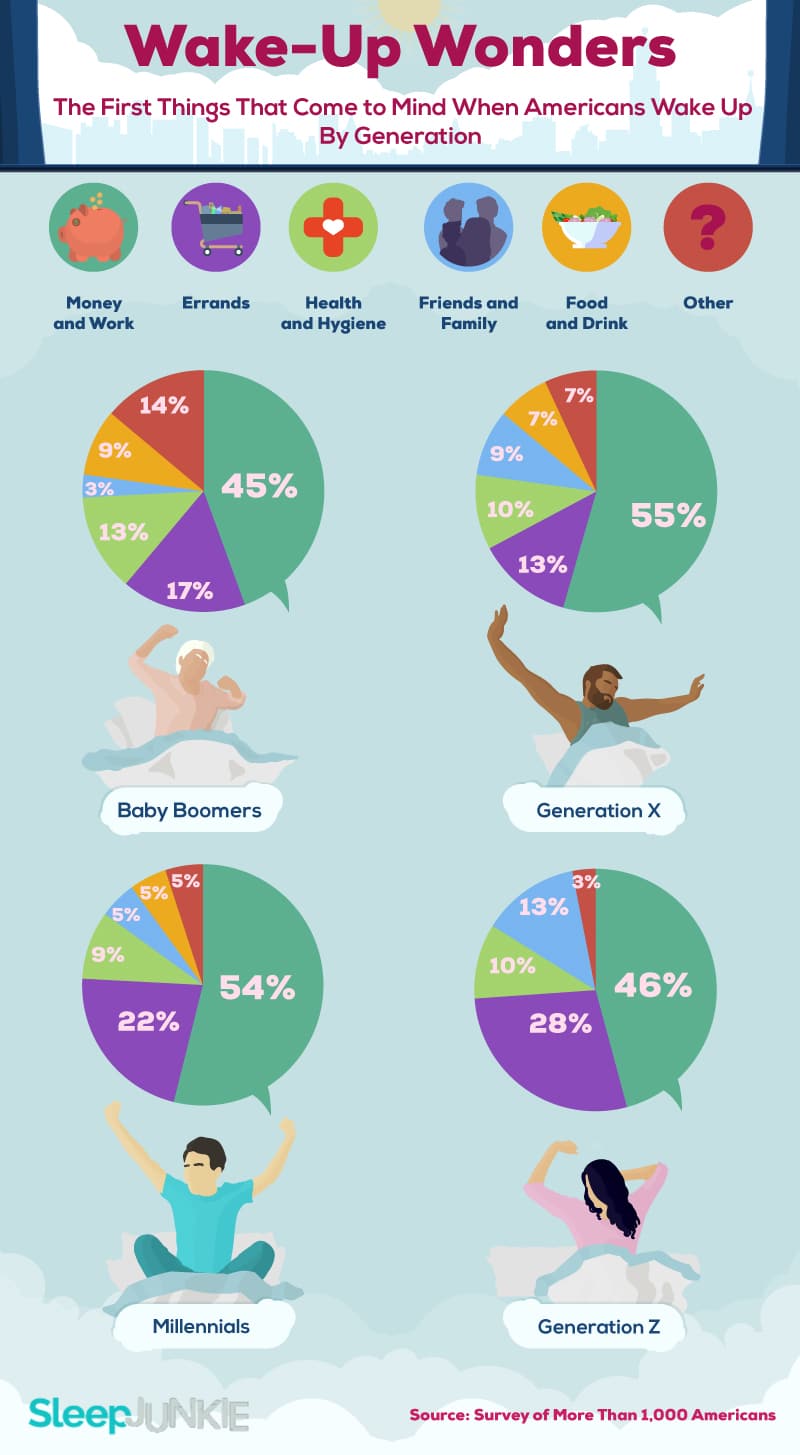 From baby boomers to Gen Zers, we compared what each generation of Americans thought about first after getting some shut-eye.

Once again, work and money were on the minds of most people across the board: 45 percent of baby boomers, 55 percent of Gen Xers, 54 percent of millennials, and 46 percent of Gen Zers. Despite having a reputation for being lazy, millennials actually wake up thinking about work and money more than half of the time. In fact, research shows the belief that these young people are lazy is a misconception, with millennials seeing themselves as “work martyrs” and often giving up more vacation days.

When Americans weren’t thinking about work, though, they thought about upcoming errands. These daily tasks made up the second most common thought for each generation. However, Gen Zers stood out: 28 percent of people born in 1996 or later immediately thought about their to-do lists upon waking, which was more than double the percentage of Gen Xers.

Baby boomers were the least likely to wake up thinking about family and friends (3 percent), and Gen Zers were the most likely at 13 percent.

A rumbling tummy didn’t seem to faze Gen Zers, either. None of those surveyed reported thinking about food or drink first thing in the morning. However, every other generation admitted to letting their stomach get the better of them on occasion: 9 percent of baby boomers, 7 percent of Gen Xers, and 5 percent of millennials mentioned mulling meals. 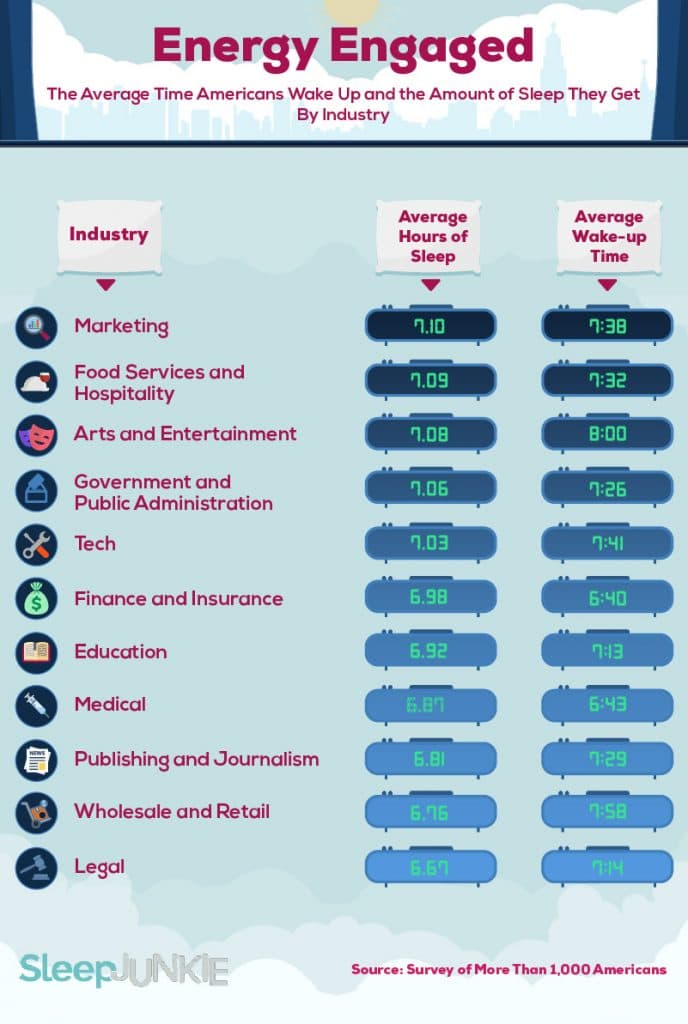 What does your job say about your sleep habits? We found a correlation between the time people got up and how many Zzzs they caught.

If your job requires you to be an early riser, chances are you’re skimping on some sleep. The industries that averaged the earliest wake-up times were finance and insurance (6:40 a.m.), medical (6:43 a.m.), and education (7:13 a.m.). Early-rising Americans working in these industries averaged fewer than seven hours of sleep each night. However, the legal industry had the lowest average amount of sleep despite waking up at 7:14 a.m., on average.

So who got the best night’s sleep? According to survey participants, those working in the marketing, food service and hospitality, and art and entertainment industries got some quality shut-eye. The marketing industry averaged the longest sleep time at 7.10 hours, followed by food services and hospitality at 7.09 hours, and arts and entertainment at 7.08 hours, all of which barely reach the minimum recommended hours of sleep for adults. 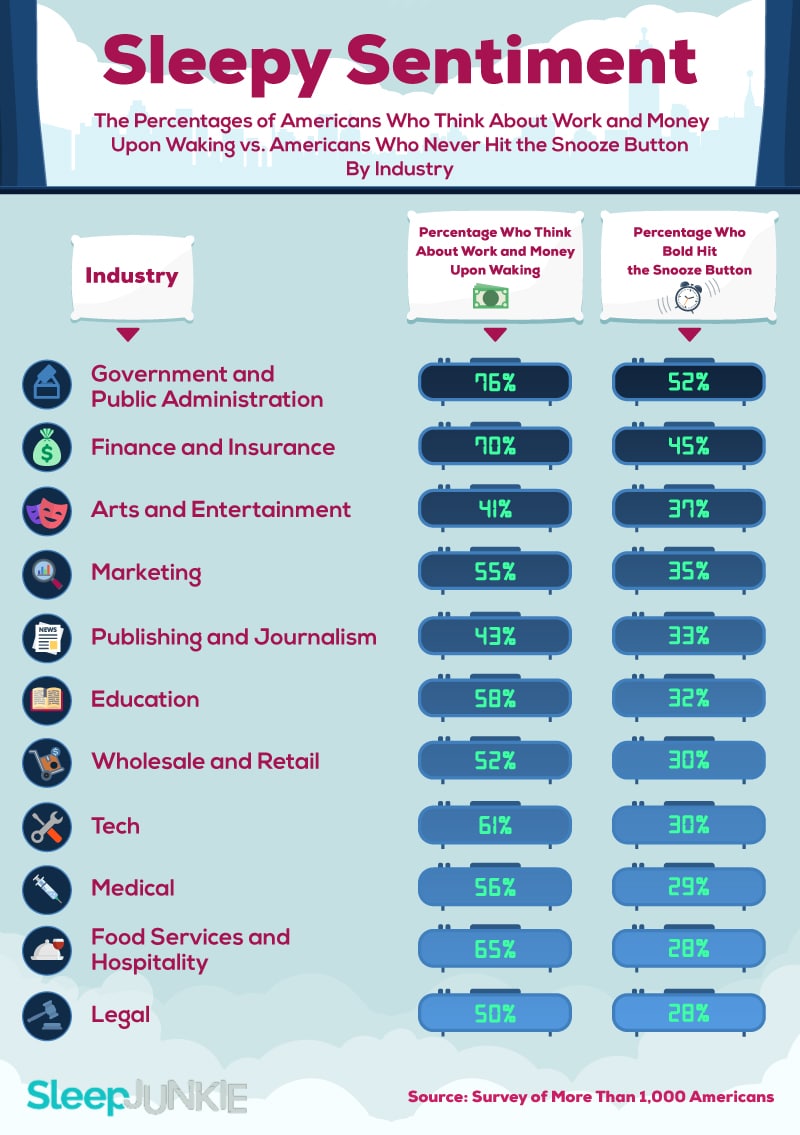 Which industries are most motivated by money, and who punches the snooze button most often? According to our survey, Americans who woke up thinking about work and money were less likely to snooze their alarms in the morning.

Seventy percent of Americans working in the finance and insurance industry thought about work and money first thing in the morning, and 45 percent never hit the snooze button.

Early Birds Really Do Get the Worms 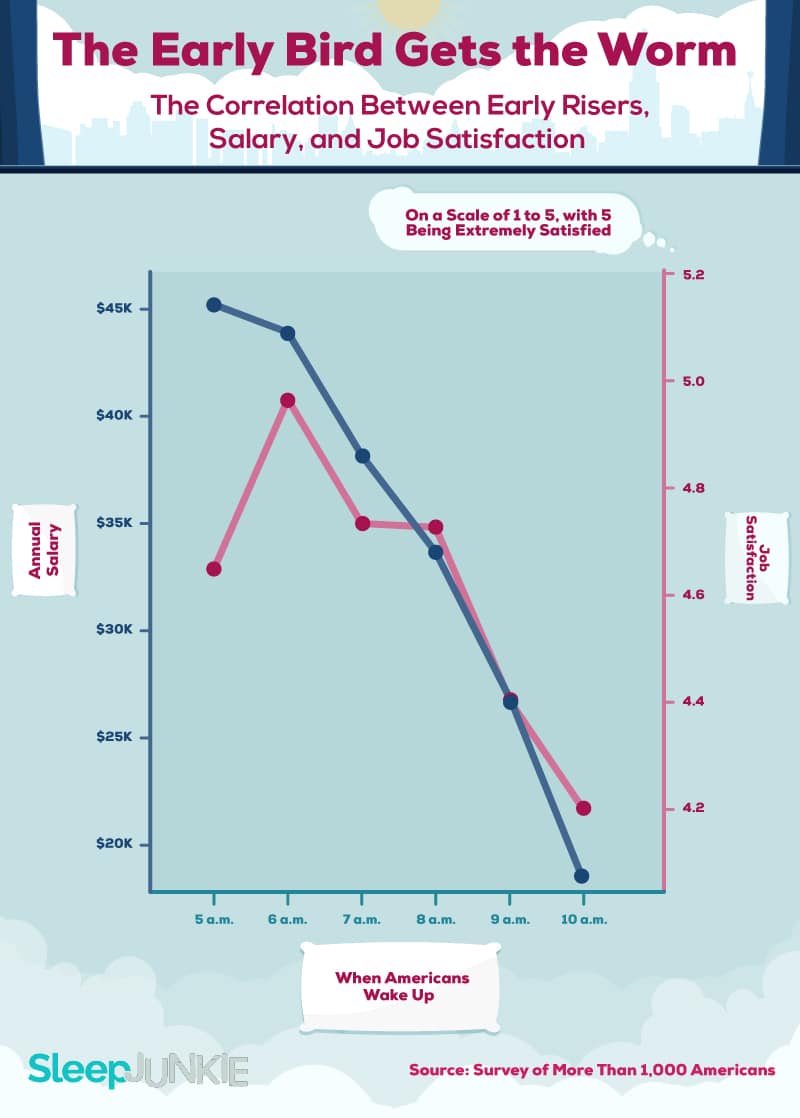 How do our waking habits contribute to our overall well-being? Does getting up earlier contribute to our motivation and success? Research shows early risers are actually happier all-around. According to our survey results, early birds really do get the worm. Both job satisfaction and salary were higher with earlier wake-up times. The peak salary ($46,000) was associated with a 5 a.m. wake-up time. However, the peak for job satisfaction was at 6 a.m. with an average salary of about $41,000.

Ultimately, job satisfaction and salary decreased the later people woke up. Dragging yourself out of bed early can be difficult, but it has benefits like better time management and productivity. The earlier you wake up, the earlier you should try to get to sleep to ensure a good night’s rest. Experts say getting enough quality sleep helps you function healthily. People who are sleep deficient can take longer to finish tasks, have slower reaction times, and make more mistakes.

What Your Habits Mean for Your Mental Health 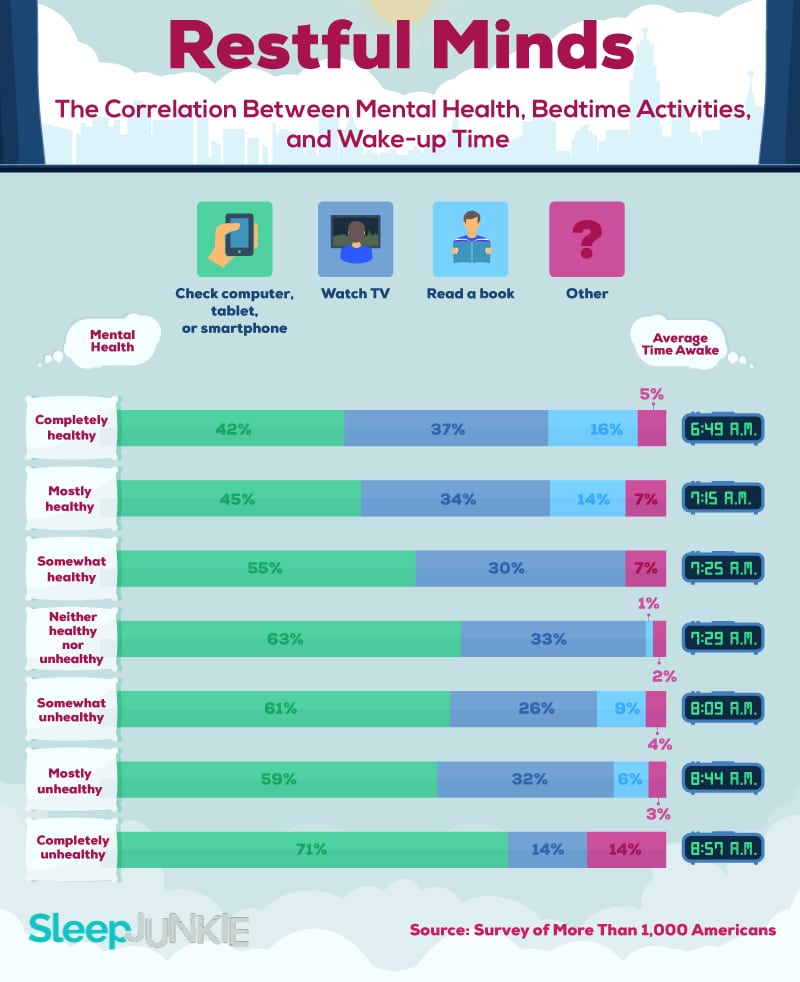 What does your wake-up time say about your mental health? And how might it be connected to poor sleep habits?

With regards to our respondents who described their mental states as “completely healthy,” the average wake-up time was 6:49 a.m. From there, the self-described “mostly mentally healthy” group woke up at 7:15 a.m. The later the wake-up time, the less healthy our participants felt, with 8:57 a.m. and later contributing to feeling completely unhealthy. Our survey shows that improvements in mental health descriptions correlated with an earlier wake-up time, on average.

Next, we asked participants to share their nighttime habits to see what routines were attributed to the best and worst mental health statuses. The significant majority (71 percent) of “completely unhealthy” people checked their computers, tablets, or smartphones before falling asleep. In comparison, only 42 percent of “completely healthy” people checked their electronics before hitting the sack. The more time people spent looking at screens (including TV) before bedtime, the less likely they were to feel mentally healthy. 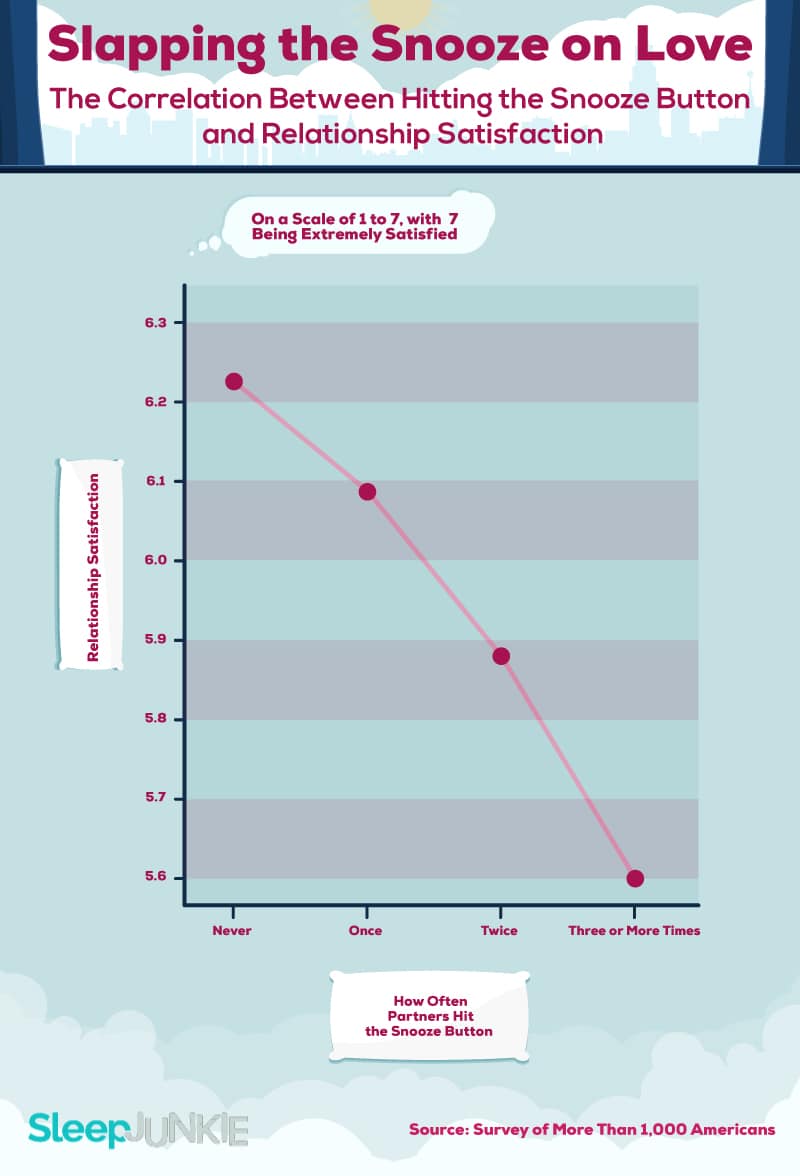 If you share a bed with a significant other, chances are your waking habits affect more than just you. To find out how relationship satisfaction and the snooze button were related, we asked survey participants to rank their relationship satisfaction on a scale of one to seven, with seven being “completely satisfied” and one being “completely unsatisfied.”

The highest-rated relationship satisfaction averaged at around 6.2 and was in association with a partner who never hit the snooze button.

If an old or uncomfortable mattress is keeping you from getting a good night’s sleep, it may be time to upgrade to the best mattress for your sleep needs— and don’t worry, we’re here to help! Whether you’re looking for the best mattress in a box or luxurious mattress from your local retailer, we’ve got you covered. To learn more about different mattress types, read our mattress reviews and find your next bed.

We surveyed more than 1,000 Americans with questions about what exactly they do and think right when they wake up, and subsequently how they feel during the day.

Don’t hit the snooze button – share our content with your readers for noncommercial purposes only. Just make sure to give our sleepy heads (or authors of this page) proper credit.