With work to get done, children to feed, TV to watch, and other personal commitments, sleep can be hard to come by. What’s more, research has shown that missing just a few hours of sleep can cause memory problems, irritability, reduced coordination, and mood changes, with chronic sleep deprivation increasing people’s risk of obesity, diabetes, and heart disease.

Lack of sleep isn’t just a grown-up problem, though. Children also struggle to meet the minimum recommended hours of shut-eye, which can result in more severe and long-lasting problems. To get a better idea of just how many children lack sleep, we surveyed over 1,000 parents of children and teens between the ages of 5 and 18 about their bedtime and sleep habits. Are school and screen time keeping kids up at night, or do parent’s habits rub off on their children? Keep reading to find out. 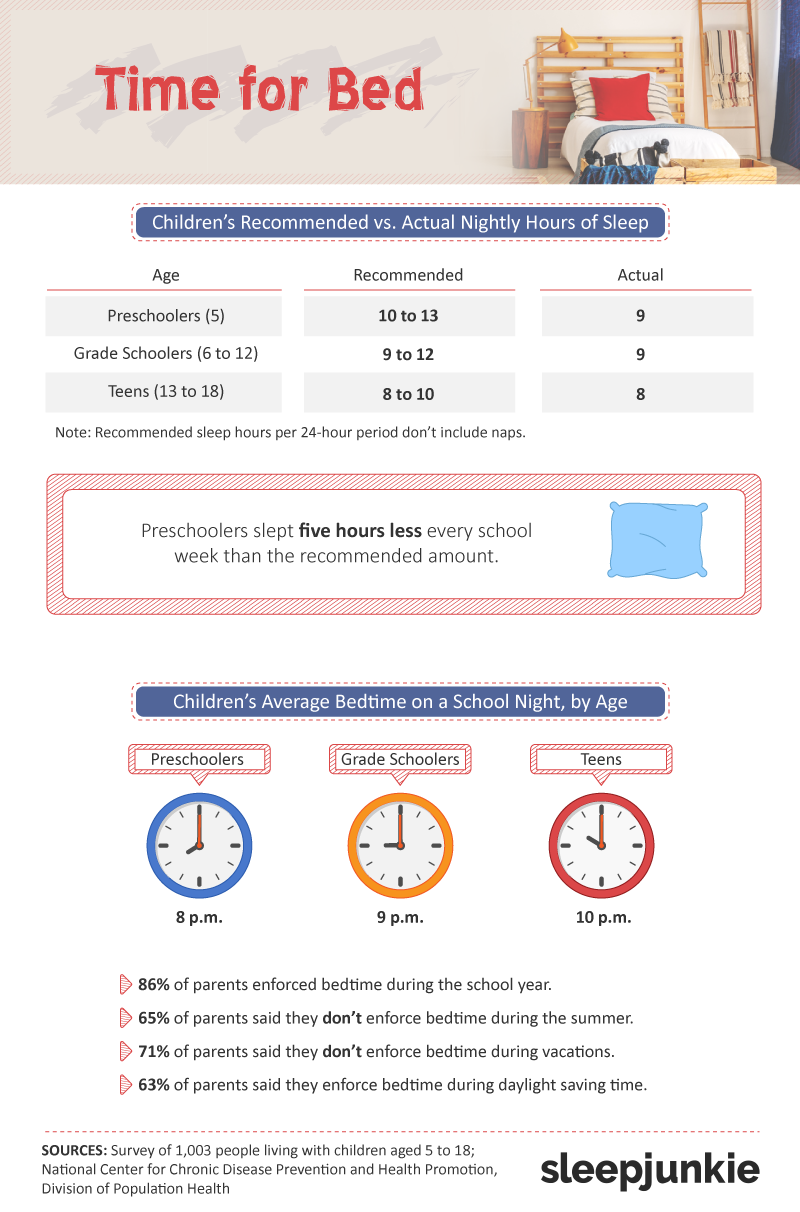 According to the National Center for Chronic Disease Prevention and Health Promotion, preschoolers between 3 and 5 years old should clock 10 to 13 hours of sleep. As children grow, the amount of sleep they need decreases, with teens aged 13 to 18 needing 8 to 10 hours. However, preschoolers slept five hours less every school week than the recommended amount, while grade schoolers and teens barely met the minimum nightly hours of sleep.

School schedules and homework may be to blame for older children missing the mark, but preschoolers have a different set of hurdles – rather than homework and early start times, drawn-out bedtimes and nighttime awakenings contribute to the lack of sleep among five-year-olds. Nevertheless, parents reported that their preschoolers had an 8 p.m. bedtime, while bedtimes for grade schoolers and teens were extended to 9 and 10 p.m., respectively.

Bedtime routines should – and do – differ based on age and specific needs, but across all ages, the most effective bedtime routines were brushing teeth, reading, and bathing. Turning off electronics was also pretty effective, according to 8.6 percent of parents; however, telling kids they couldn’t have electronics in their rooms or use social media before bed was barely effective – only 3.2 percent and 2.5 percent of parents found those routines to work, respectively. But regardless of the routine, over half of parents said they enforced them before school started, with parents of grade schoolers being the most likely to enforce routines.

Time to Turn Off Tech

Despite the belief that keeping the TV on at night helps people fall asleep, technology and sleep don’t belong together. Whether it’s falling asleep to your favorite show or scrolling through social media while tucked in, bedtime use of technology wreaks havoc on sleep quality, especially for children.

Preschoolers were the most likely to be on a tablet before bed, while nearly half of grade schoolers used social media, and 69.6 percent and 71.5 percent of teens used their smartphones or social media before bed, respectively.

Using technology too close to bedtime does more than just distract people from sleeping – it not only keeps your mind running, but blue light also suppresses the sleep-regulating hormone melatonin and delays REM sleep. However, cutting screen time an hour before bed can prevent the blue light effect, and parents seemed to follow this recommendation. Over half of parents of children across all ages cut screen time one hour or less before bed, but a third of parents of teens said they set no restrictions. Nevertheless, 6 percent of teens didn’t use technology before bed. 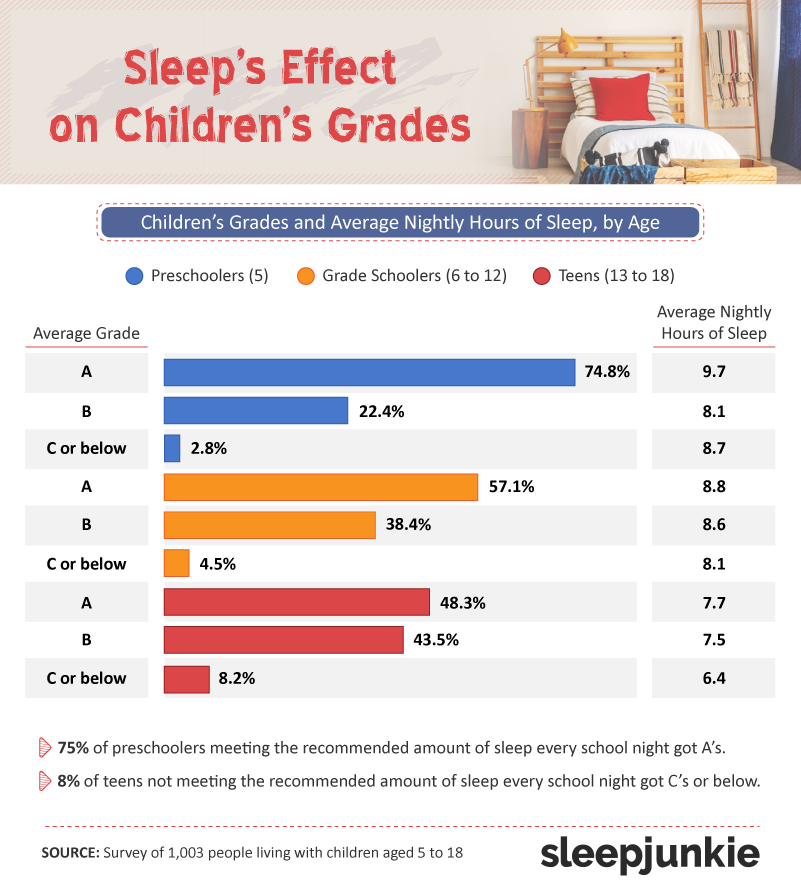 A recent study found that the more sleep students get, the better their grades – and it’s true across all ages. Preschoolers who got the most sleep (an average of 9.7 hours each night) earned A’s, with the same pattern applying to grade schoolers and teens. On the other hand, 8.2 percent of teens who clocked in an average of just 6.4 hours of sleep per school night got C’s or below. 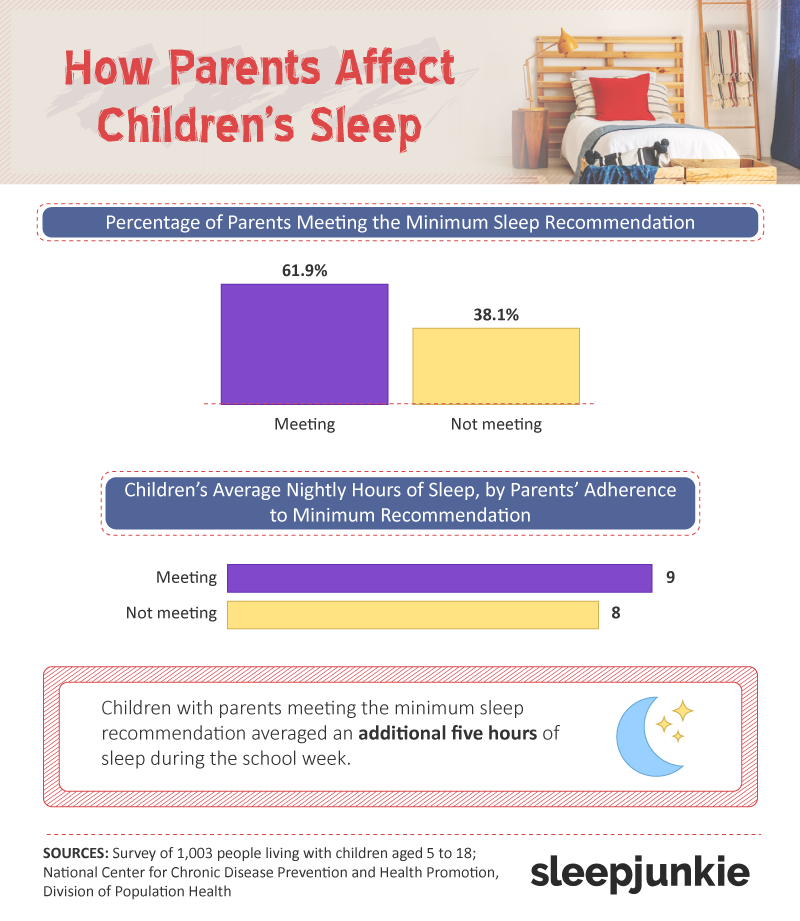 There are plenty of factors that influence the amount and quality of sleep children get, but it isn’t only about them – parents play a more prominent role than they might think. Enforcing bedtimes, routines, and technology rules are helpful, but parents who follow the same healthy habits can increase the amount of sleep their children get significantly. While adults should get seven or more hours of shut-eye per night, only 61.8 percent of parents said they met the recommendation.

But kids whose parents met the minimum sleep recommendation slept an average of nine hours per night, while children of parents who didn’t only clocked eight hours per night. While an hour may not seem like much, children got an additional five hours of sleep during the school week when their parents met the minimum sleep recommendation – an amount that can have a drastic impact on health, happiness, and school performance.

Every parent knows how having a child changes sleep habits, but in a world where technology rules, school starts early, and homework piles up, children can also struggle to meet their daily sleep requirements. In response to our findings, Ashley Doyle, editor at SleepJunkie, comments: “Setting up bedtime routines and limiting technology use before bedtime are some of the best ways to ensure children get the sleep they need, but it’s also up to parents to follow the same healthy habits. When parents clock in enough hours, their children will not only sleep more, but they’ll also see a boost in grades.”

However, getting enough sleep is only one part of the equation – the quality of sleep also counts, and the mattresses that children and parents sleep on can make or break a good night’s sleep. At SleepJunkie, our team of researchers is passionate about finding the best mattress to fit your needs.

SEE ALSO: How Much Sleep Do Kids and Babies Need?

Respondents ranged in age from 28 to 56 with an average age of 41 and a standard deviation of 7. Sixty-five percent of respondents identified as women, and 35 percent identified as men. For short, open-ended questions, outliers were removed. To ensure that all respondents took our survey seriously, they were required to identify and correctly answer an attention-check question.

These data rely on self-reporting by the respondents and are only exploratory. Issues with self-reported responses include but aren’t limited to exaggeration, selective memory, telescoping, attribution, and bias. We did not have a validated measure for age groups available to us, so we created one by grouping the ages of our sample size by preschoolers (5), grade schoolers (6 to 12), and teens (13 to 18). All values are based on estimation.

Convincing children to go to sleep is no easy task, but when parents understand the necessity, they may be more likely to start bedtime routines earlier. If you know someone who could benefit from our findings, feel free to share this study with them. The graphics and content found here are available for noncommercial reuse. All we ask is that you include a link back to this page so that readers get all the information and contributors receive proper credit.