What if No One Had to Sleep?

Imagine if you could add a few more hours into your day. What would you do? What could you get done?

It may sound far-fetched, but if you didn’t have to sleep at night, you’d get more than a few hours back to fill in however you wanted. Eight hours a day would add up to 56 extra hours a week, 240 hours a month, and over 2,900 extra hours a year.

That’s no small amount, and in our fantasy scenario, there are no limits on how people could use the time. We surveyed more than 1,000 Americans about what they’d do if they had a few extra hours each day and no obligations on how to spend it. From reading more books and taking on new hobbies to even putting in extra hours at the office, this is how they told us they’d put that free time to use. Continue reading to see what we discovered.

That pleasant sensation when lying down to sleep isn’t just a product of knowing another long day has ended – it can be a chemical reaction in our brains. That science could be why 18 percent of Americans surveyed felt it was undesirable or very undesirable to forever forgo sleep.

However, not wanting to miss the opportunity to get a few hours back each night, 65 percent of people considered it desirable and very desirable to live in a world where sleep was an option and not a requirement. In fact, millennials were more excited by the notion of a life without sleep, while baby boomers were the least enticed by the idea. Twice as many baby boomers than millennials told us the concept was very undesirable.

Finally, nearly a third of Americans liked the idea of living in a world where sleep didn’t exist at all, and no one ever became tired.

Sleep Is for the Birds 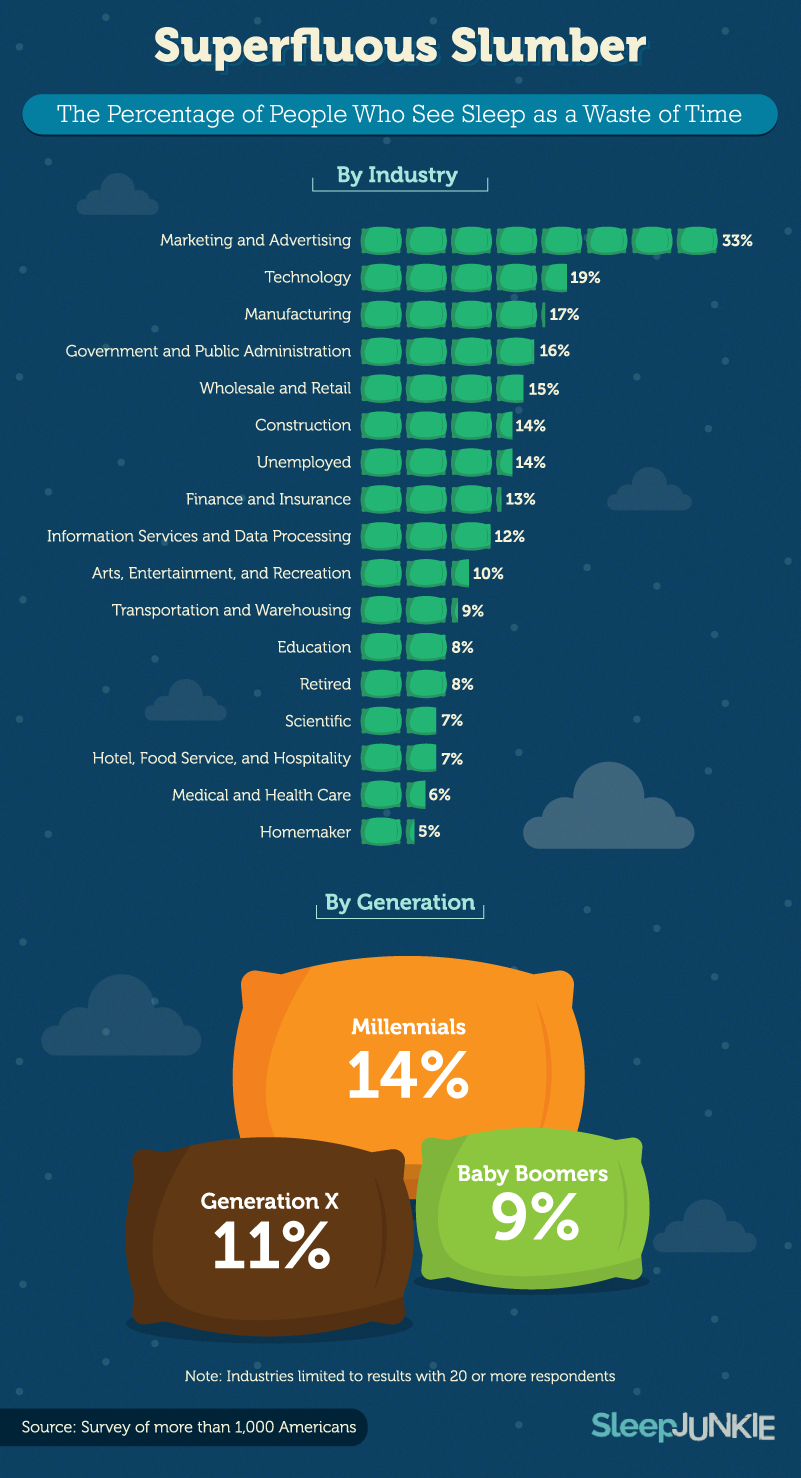 If you’re lucky enough to work in the farming, fishing, or forestry industry, you might consider yourself a big fan of the REM cycle and everything else that comes with a good night’s sleep. If you’re anyone else – you may be somewhat less inclined to see the value in sleep at all.

They drink more coffee than nearly any other industry across the country and, according to our study, are the most likely to consider sleep a waste of time. Who are these nocturnal creatures? People who work in marketing and advertising. A third of people from the wide world of marketing had way better things to do with their time than sleep, followed by nearly 1 in 5 people from the tech sector. The morning routines of highly successful tech leaders and CEOs have been well-documented, and they often involve very early mornings and instant productivity immediately after hopping out of bed.

Not everyone surveyed agreed with this harsh assessment, however. Less than 1 in 10 people from a number of industries, including those who worked as medical professionals, homemakers, or were retired, felt sleeping was a waste of time. 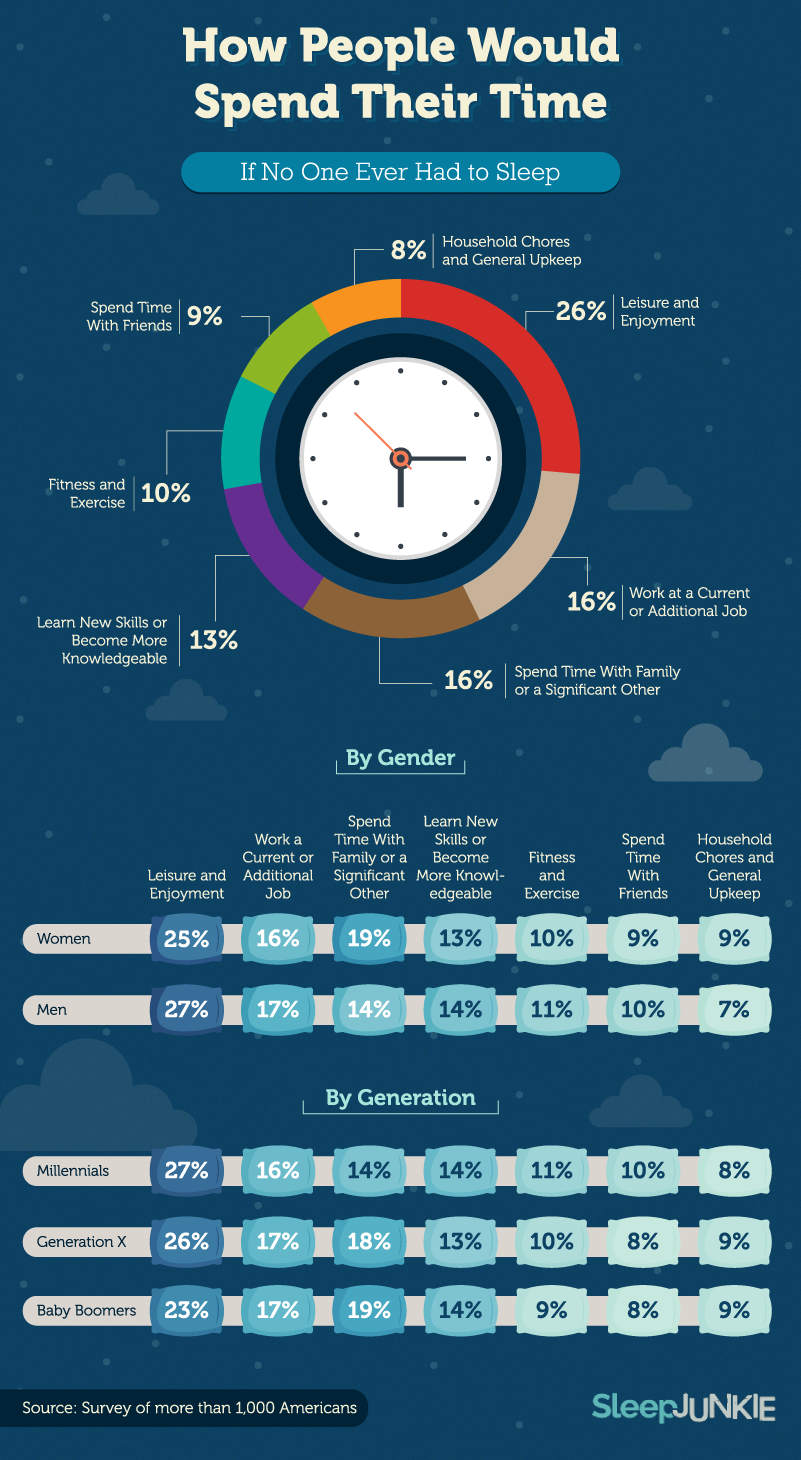 If you get the recommended eight hours of sleep every night, then you’ll sleep for a third of your lifetime. Over the course of 75 years, the average person would sleep roughly 26 years or 9,125 days.

Now imagine what you could do with all of that extra time.

For around a quarter of Americans polled, the answer was simple: They’d just plain relax. While leisure and enjoyment topped the list of responses, nearly 1 in 5 Americans would want to spend the extra eight hours (or 25 years, even) working at their current or an additional job. Millions of Americans today work more than one job, but millennials take the cake. Research indicates that more than a third are working second (or even third) jobs.

Men surveyed were more interested in both leisure and work, while women were more inclined than men to spend their time with family (19 percent), or even keep their homes tidier (9 percent). Beyond leisure, baby boomers and Gen Xers indicated their top priority would be to spend time with their family or significant other, while millennials were most interested in working. 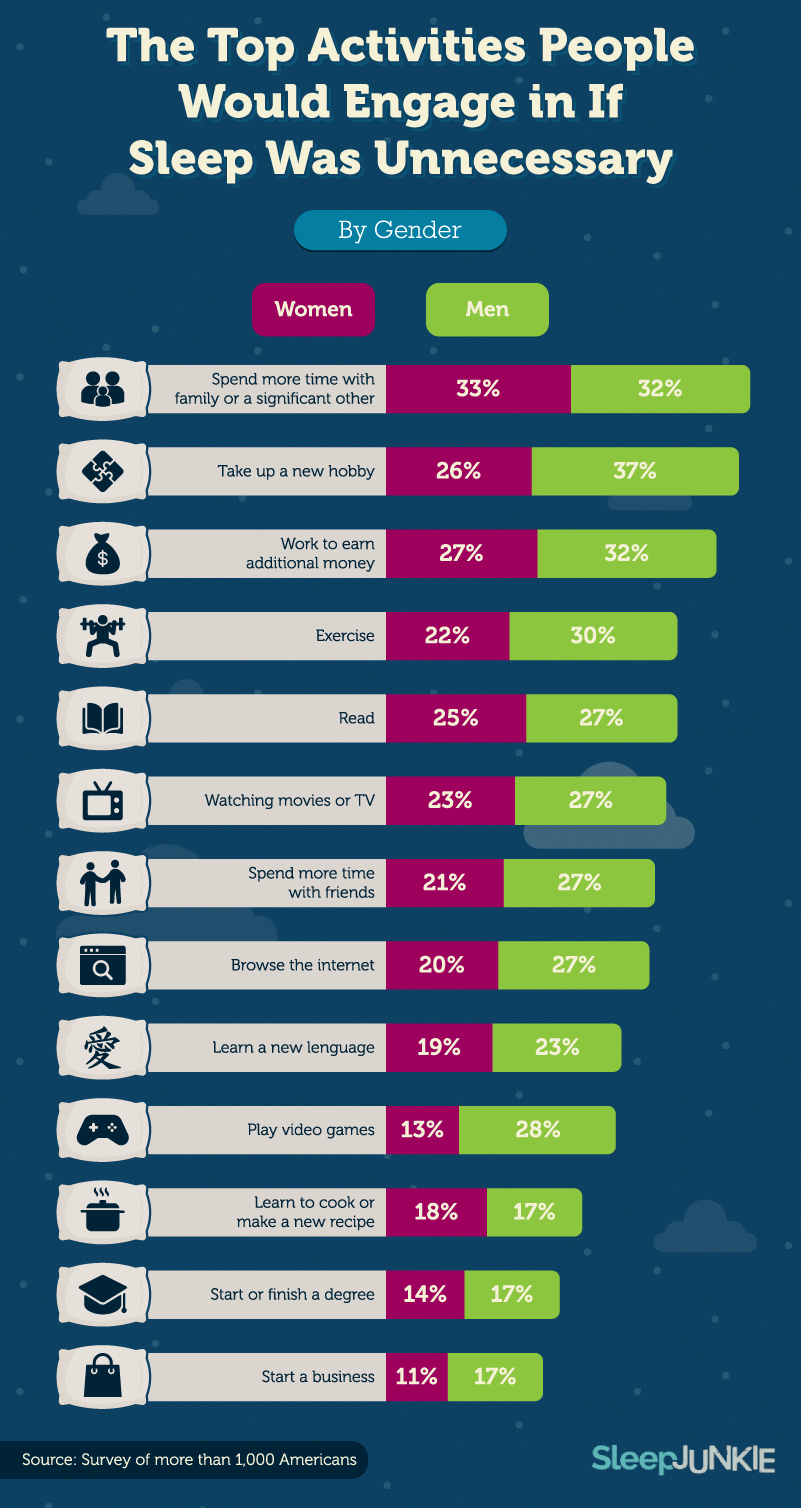 Time is the one commodity in life you can never get more of – unless you cut out the eight hours each night you’re (supposed to be) sleeping. Men and women across the country had different opinions on how to best spend those extra hours if they didn’t have to sleep.

The top priority for women was to spend more time with their families and significant others. When it comes to taking time off, Americans are known for leaving their vacation hours on the table year after year. But why? Mostly because they don’t think they can balance time off with their workloads.

However, more than a third of men would learn a new hobby with the extra time, and nearly as many would earn additional income or spend time with family. 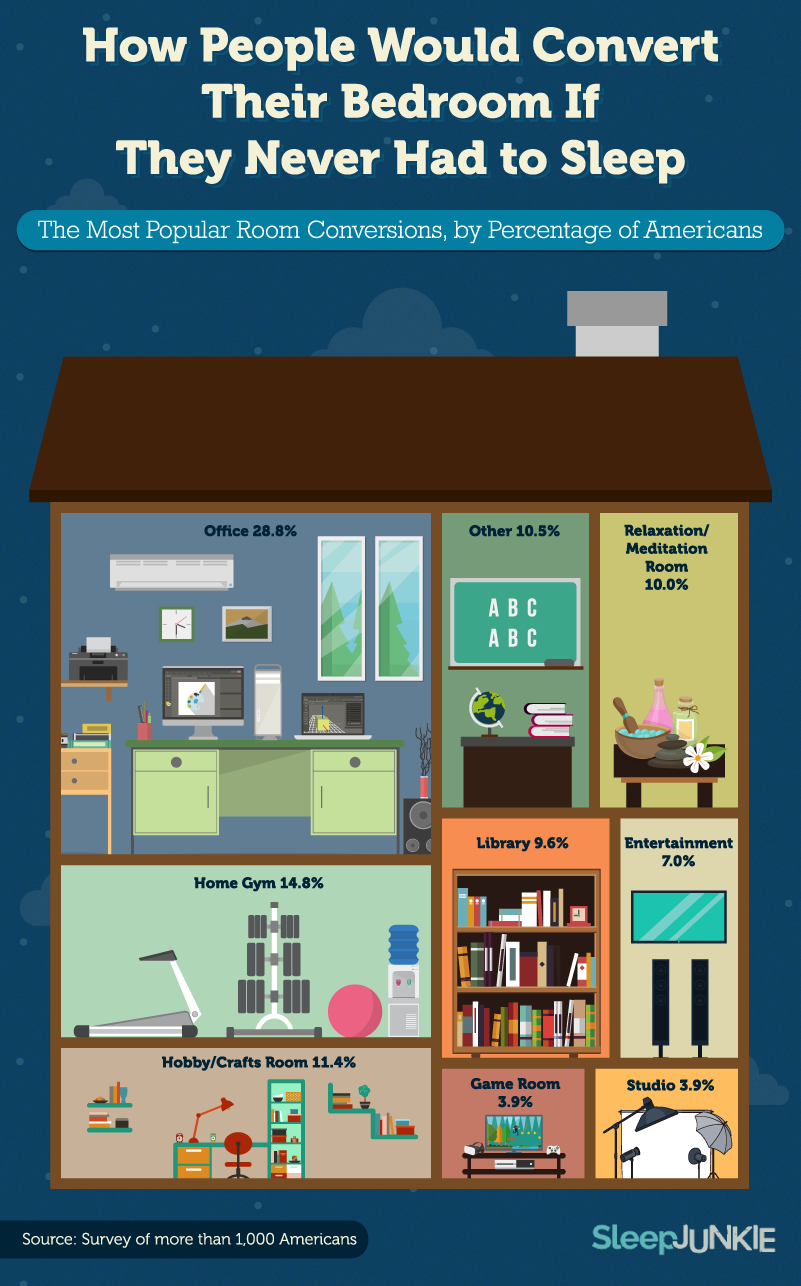 More than 1 in 4 Americans would turn their bedrooms into a home office if they didn’t need to use the space for sleep any longer. To reiterate that Americans tend to be workaholics, other studies have found that more people work remotely today, and a majority stay plugged in on the weekends, when they’re on vacation, and even while sick.

As one person told us, “My bedroom already doubles as an office. I might consider swapping the bed for a cozy couch.”

Nearly 15 percent of people would turn their bedrooms into a home gym or a hobby room. Some participants even came up with unique solutions for their bedrooms. Because not everyone’s priority for having a bed in their bedroom involves sleeping, one person said they’d convert it into a cat room for [their] cats.” 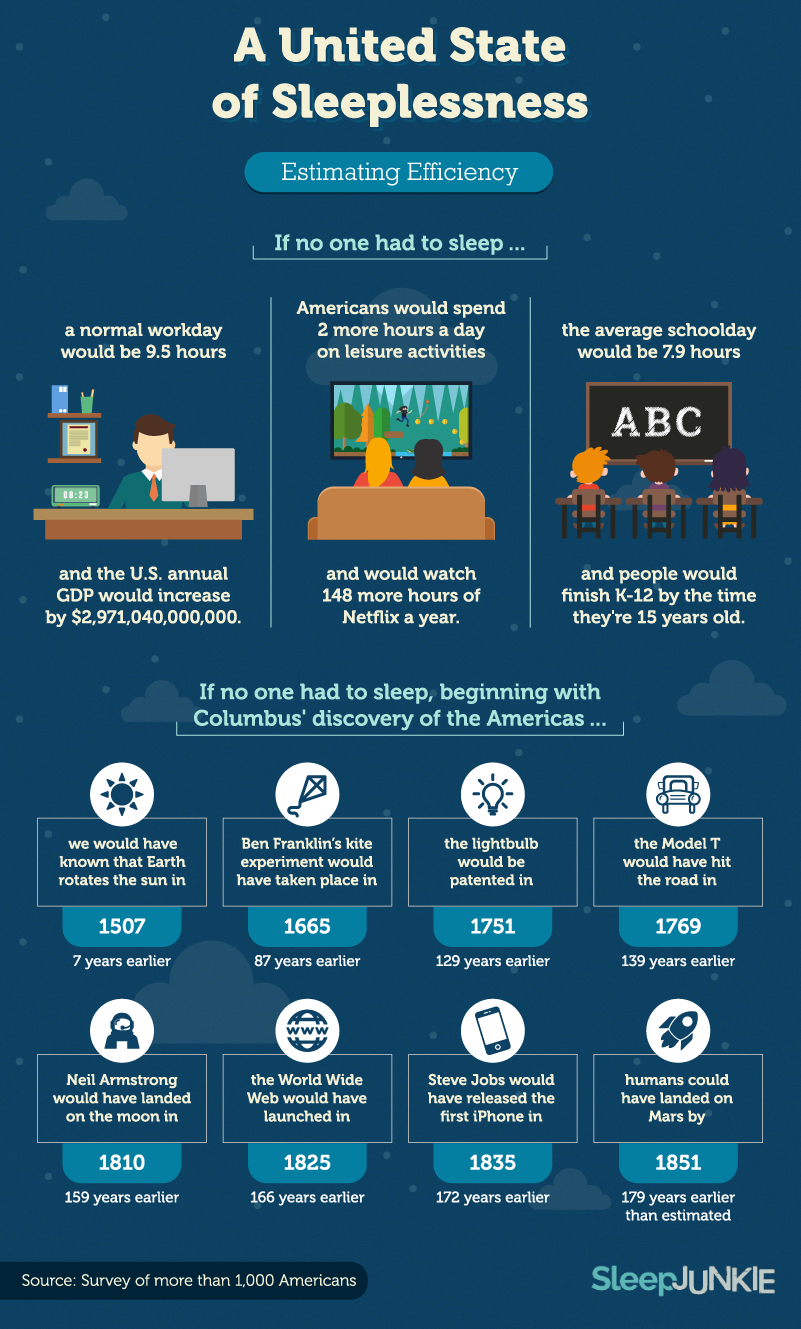 If we never had to sleep, how would all those extra hours affect the country or even the rest of the world?

Based on the number of people who’d want to work more (with a typical workday being 9 hours or more), the U.S. annual gross domestic product (GDP) would increase by more than $2.9 billion. Not every hour would be productive, though. Even the CEO of Netflix knows his biggest competitor isn’t a rival company – it’s sleep. The amount of time for binge-watching TV would in fact increase, giving people the opportunity to watch more than 148 additional hours of Netflix a year. People could even potentially graduate high school by the time they’re 15 years old.

And the global impact? Possibly even more profound. Without having to spend eight hours a night sleeping, we would have discovered that Earth rotates around the sun in 1507 (seven years sooner), Neil Armstrong might have landed on the moon in 1810 (159 years earlier), and Steve Jobs may have revealed the very first iPhone in 1835. Imagine that.

Living in a world without sleep may seem exciting. There’s more time to relax, spend time with our families, and even pick up a new hobby or craft. However, the impact of getting all that time back wouldn’t just change our lives – it would change the world.

In reality, though, getting sleep is a crucial element of our everyday health. How your brain works, how well you function over the course of the day, and even your physical health are impacted by the amount and quality of sleep you get— so it’s important to make time for necessary shut-eye. Upgrading to the best mattress for your particular needs can help you look forward to hopping into bed after a long day, and an adjustable base can make watching TV or reading a book while winding down for sleep much more comfortable.

Whether you’re looking for the best mattress in a box, a memory foam mattress, or a bed to alleviate back pain, we have the best in buying guides and reviews.

At SleepJunkie, we won’t let your mattress hold you back from getting the best sleep possible. With the right knowledge, you can leave the tossing and turning behind – there’s only so much time in the day, after all.

The asset titled, “A United State of Sleeplessness” assumes eight hours of sleep and an eight-hour workday. Time spent dedicated to working or leisure activities in a world without sleep were determined through survey results.

Don’t hit the snooze button on this one. We’d love to see the results of our study featured on your site for any noncommercial use. We only ask that you ensure a link back to this page, so our contributors earn credit for their work.