How does plant-based memory foam compare to traditional?

Just how well do plant-based memory foam compare to traditional memory foam mattresses? Many shoppers are surprised to learn there are differences and may not realize what characteristics distinguish one from the other.

In order for consumers to learn more about the similarities and differences we take an in-depth look at not only the two types, but also comparisons of popular manufacturers that were chosen to represent both plant-based memory foam and traditional.

No stranger to the game, traditional forms of viscoelastic material have been used in bedding for over 20 years now. Memory foam continues gaining popularity among consumers, and in the past ten years this has inevitably meant more options coming to the market. Though this type of bed consistently rates higher than spring beds in terms of comfort and overall satisfaction, there are few issues that newcomers like plant-based foams have sought to address.

Traditional memory foam mattresses are made from petroleum-based polyurethane. The process was originally developed by NASA, later purchased and introduced into the mass market. This type of foam is temperature-sensitive, meaning it reacts by hardening in cold spaces and softening in warm. The buoyant sensation and pressure-reliving properties come from the memory foam’s ability to contour to the sleeper and evenly distribute weight.

Though traditional memory foam has many positive aspects, there are few complaints which variations have sought to address such as heat retention, odors and chemicals, excessive viscosity, and firmness unpredictability. Plant-based memory foam replaces a portion of the petroleum products with plant-derived oils.

In addition to being considered more eco-friendly, some types of plant-based memory foam have actually been shown to improve breathability and eliminate other concerns without heat-retention issues. Certi-PUR® certified plant-based foams are also free of chemicals like CFCs, formaldehyde, phthalates, PBDEs, and are low in VOCs, all of which have been cause for concern in traditional memory foams.

Amerisleep is a leading mattress brand who sells plant-based memory foam and hybrid mattresses. They were one of the first retailers to use the innovative material and have carved out an eco-friendly and health-conscious niche. They tout eco-conscious shipping practices, affordable pricing and foams free of harmful chemicals. The brand uses an extreme open-cell memory foam that dissipates heat quicker than traditional foams, is temperature neutral, and has a quick response time.

Comparison of Amerisleep and Traditional Mattresses

Grading is based on total owner reviews from both Amerisleep.com and from independent review sites. There is a more detailed explanation of our review below.

Amerisleep and other brands provide pressure relief, above average warranties, longevity, quality construction and reduction of motion transfer on nearly an even keel, with both types of foam receiving similar ratings in these fields. The most notable differences are health/offgassing, sleeping hot, response time, price, and owner reviews.

We have dived deeper into explanations of each of these differences with information gleaned from mattress reviews in the following sections.  Take a look to see how plant-based memory foam compares to traditional.

For this purpose, health refers to potentially harmful chemicals used in the composition of the mattresses, which is closely tied to the potential for off-gassing and the release of volatile organic compounds (VOCs). This is a group of more than 60 chemicals that are considered to present health hazards when people suffer prolonged exposure. With the average person spending 8 hours, or one-third of their day in close contact with their mattress, chemicals can pose serious concern.

Most people prefer to feel cooler when sleeping, and it is thought that cooler temperatures improve sleep quality. Thus, heat and memory foam has become a hot topic in recent years and is a top concern for some.

The response time of a foam refers to how quickly it returns to its original shape or recontours to the movements of the sleeper. This affects how easily a person can move and change position, as well as intimate moments.

Savvy shoppers generally approach a major purchase with the objective of receiving the best value for the money they spend. This can include watching for sales, as well as understanding that name brands do not necessarily equate with quality.

Many well-known lines from clothing to cars to mattresses spend a great deal of money on advertising which is generally passed on to the consumer. They may be status symbols, but in reality, once the sheets go on the mattress tag doesn’t matter – but comfort and quality do.

Reviews and ratings are an important consideration for many shoppers, especially when shopping online or trying a new product. Average reviews for these two brands showed significant difference. To provide a baseline, about 80% of people overall are satisfied with memory foam beds. 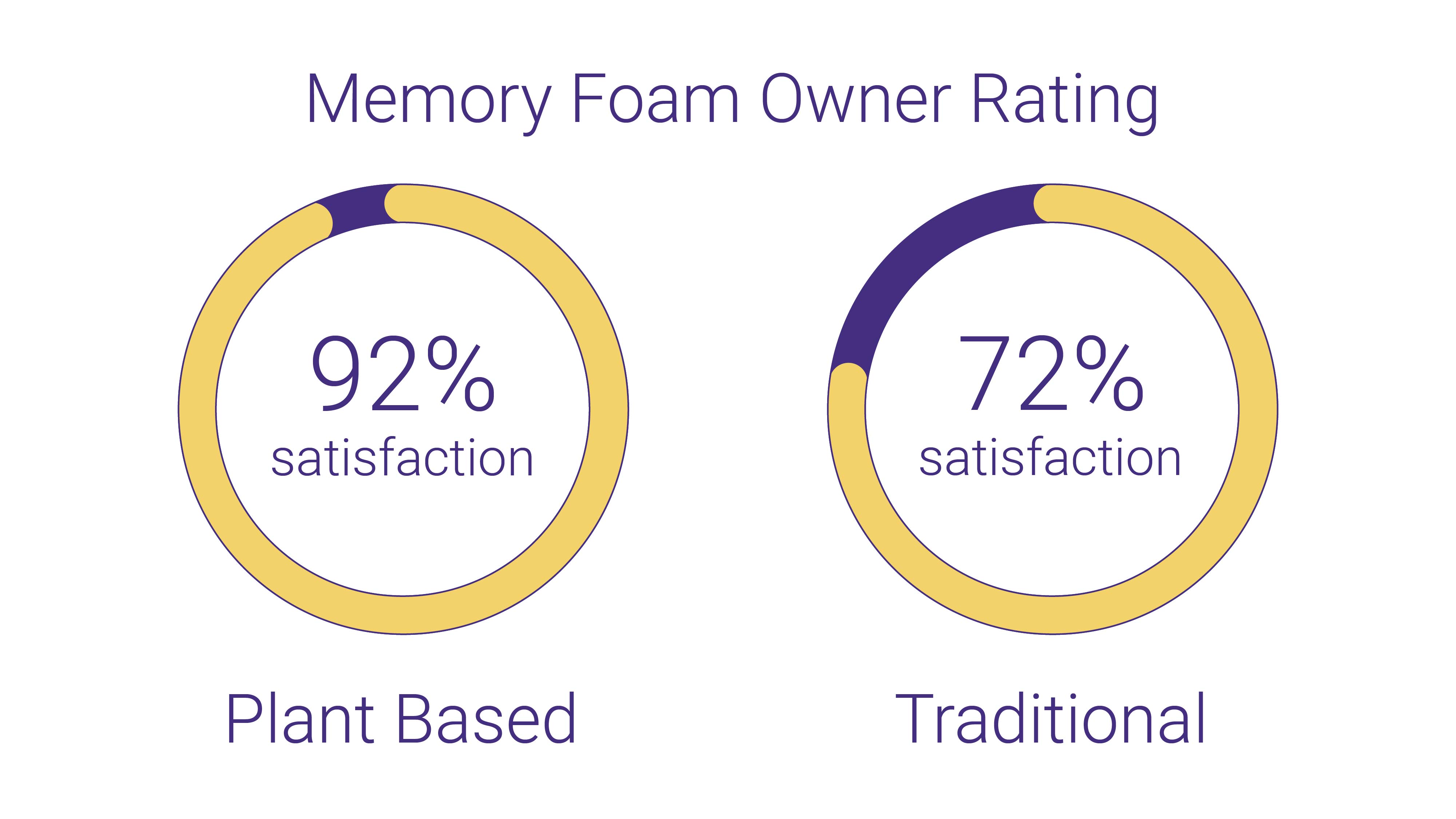 As we’ve mentioned before, when researching different types of beds, it can be helpful to compare performance factors using actual owner opinions rather than relying on cost, commercials, or branding to make shopping decisions. The above information was tabulated from analysis of the total available reviews from each brand’s website and from independent review sites.

Individual mattresses vary, however this comparison is designed to show averages to help readers identify differences between memory foam types for product research purposes. Plant-based memory foam mattresses are relatively new, but they perform as well or better than their synthetic competitors.