You may already be familiar with certain sleep patterns of high-profile businesspeople across the U.S. Bill Gates and Apple CEO Tim Cook reportedly get seven hours of sleep each night, though Cook is known as more of an early riser since he wakes up at 4:30 a.m. Anna Wintour, the longtime editor-in-chief of Vogue magazine, is known for waking up at 5:45 a.m. and starting her day with an active round of tennis.

But what about CEOs at startup companies still trying to reach the status of Tim Cook or Anna Wintour?

To find out, we surveyed 27 CEOs from American startup companies about their sleep habits compared to 100 non-CEOs and asked all participants which routines made them most productive. Want to know if naps, an early start to the day, or oversleeping could be standing in the way of ultimate success or simply paving the way for it? Continue reading to see what we discovered.

Not Sleeping on the Job 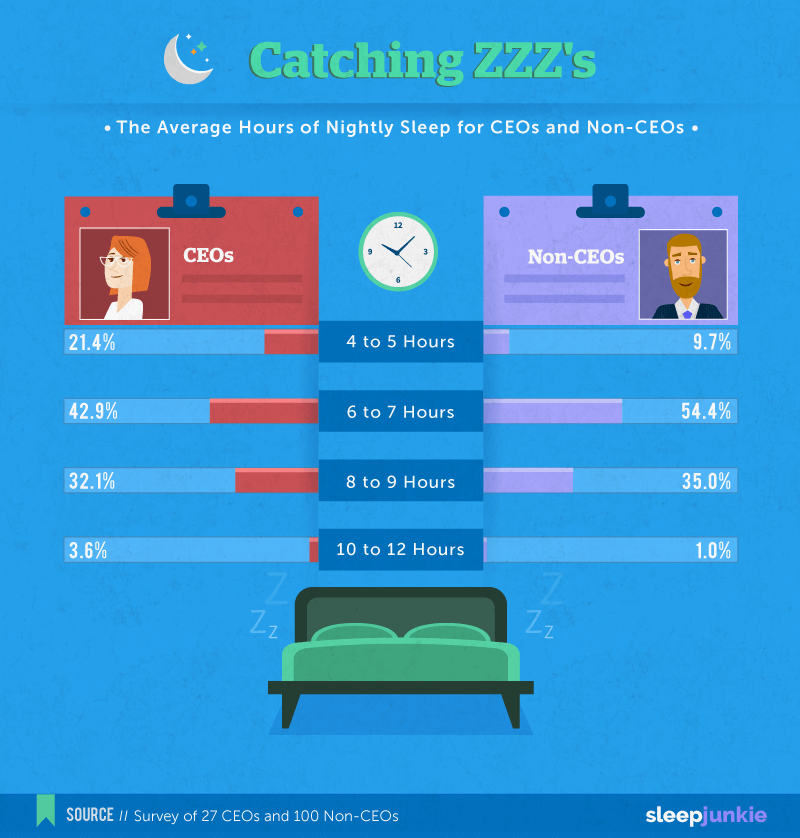 According to the Centers for Disease Control and Prevention (CDC), the amount of sleep an average person needs depends on how old they are. Newborn babies should be getting between 14 and 17 hours of sleep every day (lucky them), while teenagers may need between eight and 10 hours of sleep. By the time we reach adulthood, the recommended number of hours of sleep falls to at least seven a night.

Of course, not everyone takes that recommendation to heart. President Donald Trump is famously credited for saying he only sleeps three hours a night, and PepsiCo Inc. CEO Indra Nooyi claims to clock in only four hours of shut-eye a night. Richard Branson, the founder of Virgin Group, gets between five and six hours of sleep nightly.

So where do startup CEOs fall? More than 1 in 5 indicated they slept only four to five hours a night, while roughly twice as many (nearly 43 percent) committed closer to the recommended sleep requirements and logged six to seven hours of sleep. Nearly 1 in 3 said they went above and beyond the standard recommendation.

Sleeping less may sound like being more productive on the surface, but research suggests the inverse might be more accurate. Sleep deficiency can negatively affect the areas of the brain responsible for making decisions, solving problems, and controlling emotions.

The Early Bird Gets the Worm 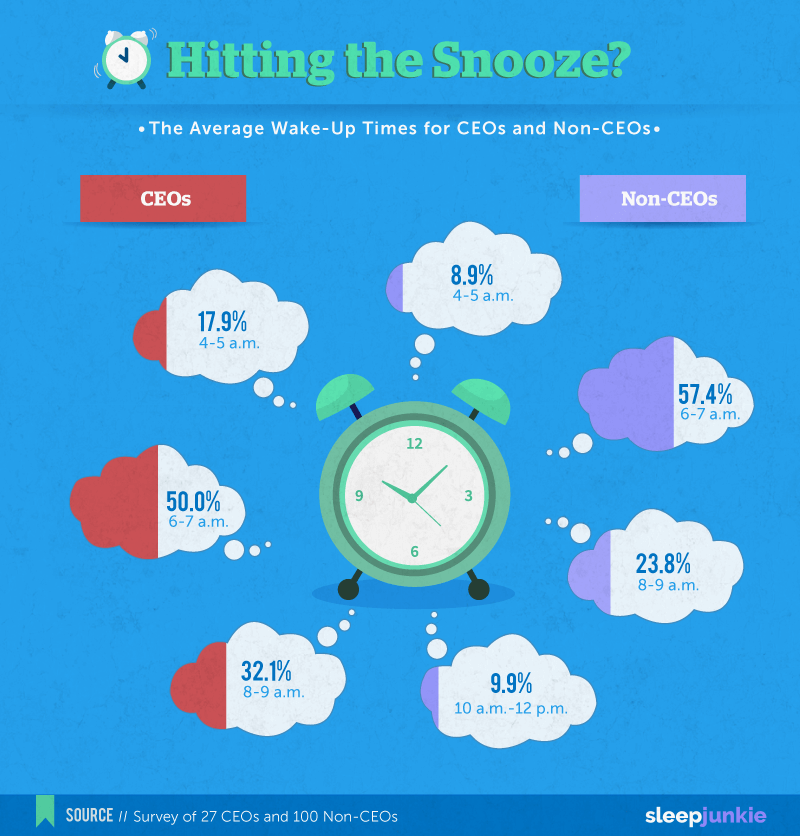 Early to bed, early to rise? This might depend on your title at work.

Our survey found startup CEOs were roughly twice as likely than non-CEOs to wake up in the very early morning hours of 4 a.m. and 5 a.m.While nearly 18 percent of startup CEOs woke up way before the sun, half set their alarms for somewhere between 6 a.m. and 7 a.m. While no CEOs got out of bed any later than 9 a.m, nearly 1 in 10 non-CEOs with more traditional job roles started their days between 10 a.m. and noon. Perhaps a night shift is to blame?

The eternal debate between night owls and early birds isn’t just about preference – it can also be a matter of productivity and success. Most people aren’t wired to do their best work late in the evening, and your body’s biological clock could be more inclined toward getting up and moving in the morning as opposed to sleeping in. Other studies have shown people who are up by 7 a.m. typically “have a lower chance of being stressed, depressed, and obese.”

How Their Sleep Compares to Ours 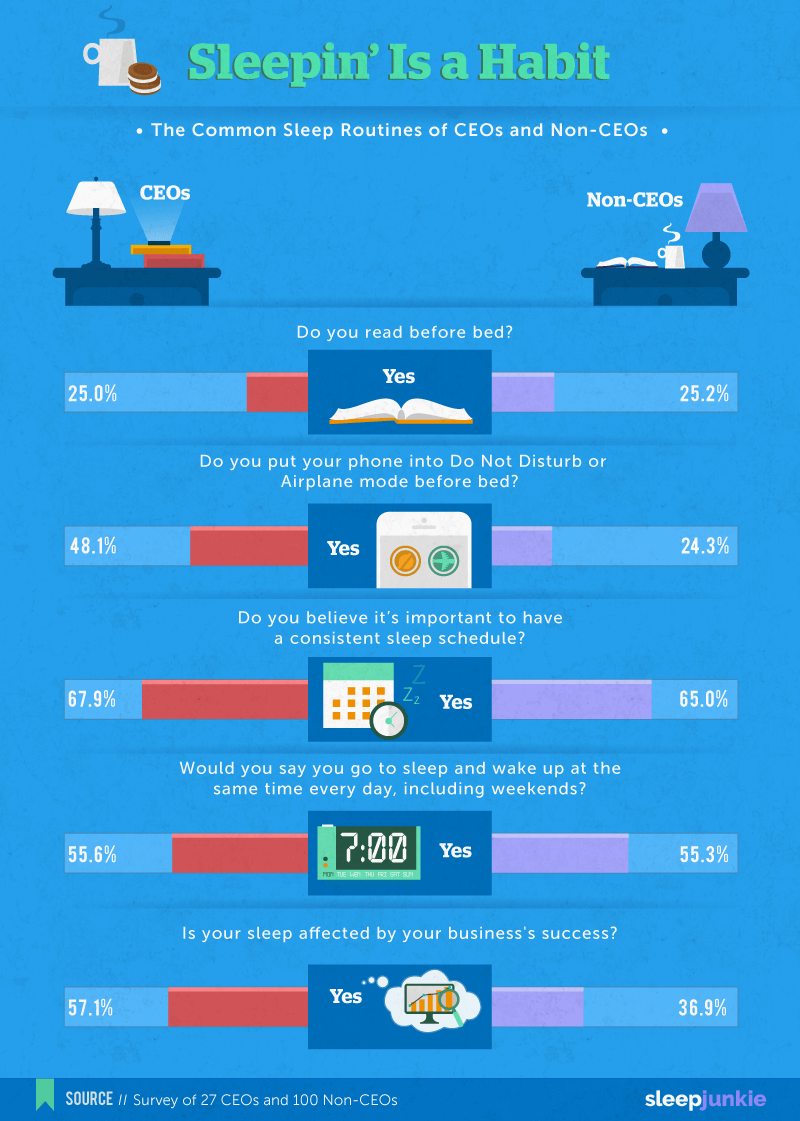 Feeling drained in the morning? Keep waking up after a full night’s sleep but still don’t feel energized enough to start the day? Well, research suggests certain sleep habits could be to blame for disrupting the actual quality of our rest.

Simple do’s and don’ts – like making sure you go to bed and wake up at the same time regularly, unplugging from electronic devices that may be overstimulating your brain before bed, and even reading a book before turning off the lights – could help your body fall asleep faster and stay asleep longer.

Startup CEOs were believers in some of the best sleeping habits. Nearly 68 percent said they believed keeping a consistent sleep schedule was important, and over half committed to going to bed and waking up at the same time every day, even on the weekends. Over 48 percent put their phones into Do Not Disturb or airplane mode to make sure they stayed disconnected once the lights went out, while less than 1 in 4 non-CEOs did the same.

CEOs and Their Cat Naps 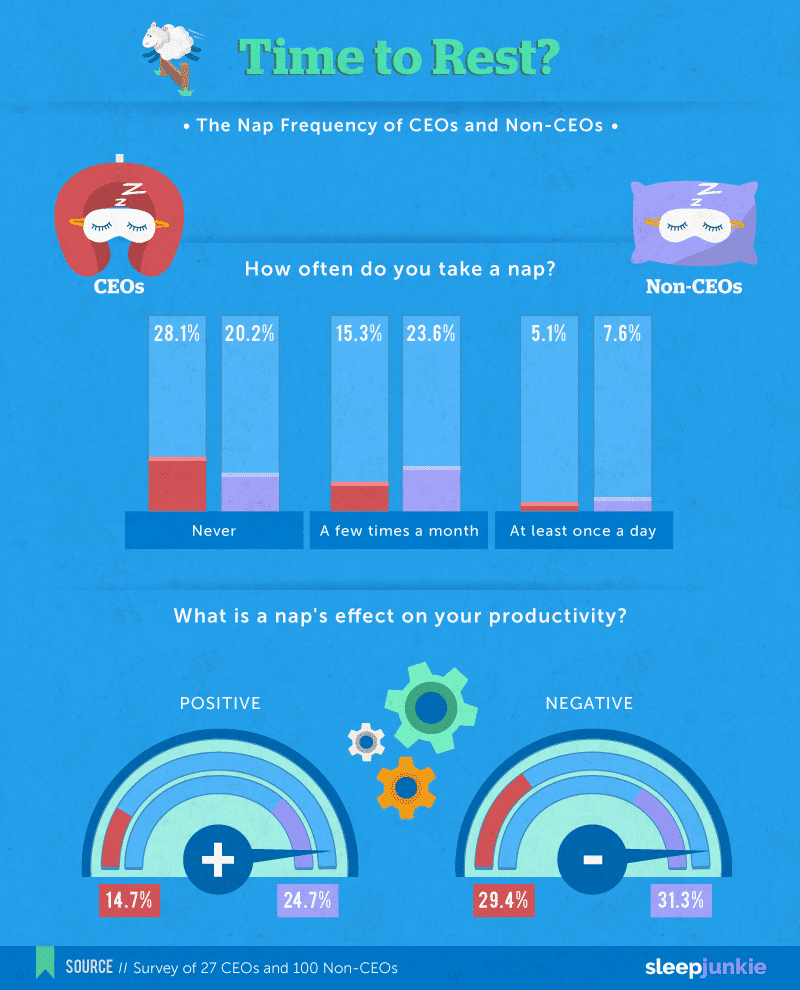 Whether you’ve just got home from a long day at work, or you’re halfway through a weekend off and are starting to feel just a bit sluggish, almost nothing sounds better than taking a little midday nap. But could naps be disrupting your sleep in the long term?

Sleep experts suggest the good or bad nature of a nap depends on the time of day you decide to lay down and how long you end up sleeping. Taking a nap too late in the day could keep you from falling asleep again at night, and sleeping for too long could have the same effect. Naps can also be disruptive for people who experience chronically disruptive sleep, and napping too frequently can make these issues even worse.

Startup CEOs were less likely to take naps than everyone else. Only a little over 15 percent said they napped a few times a month compared to nearly 24 percent of Americans in more traditional roles. Of those CEOs who did occasionally catch a midday snooze, almost 15 percent said they believed naps had a positive impact on their productivity. 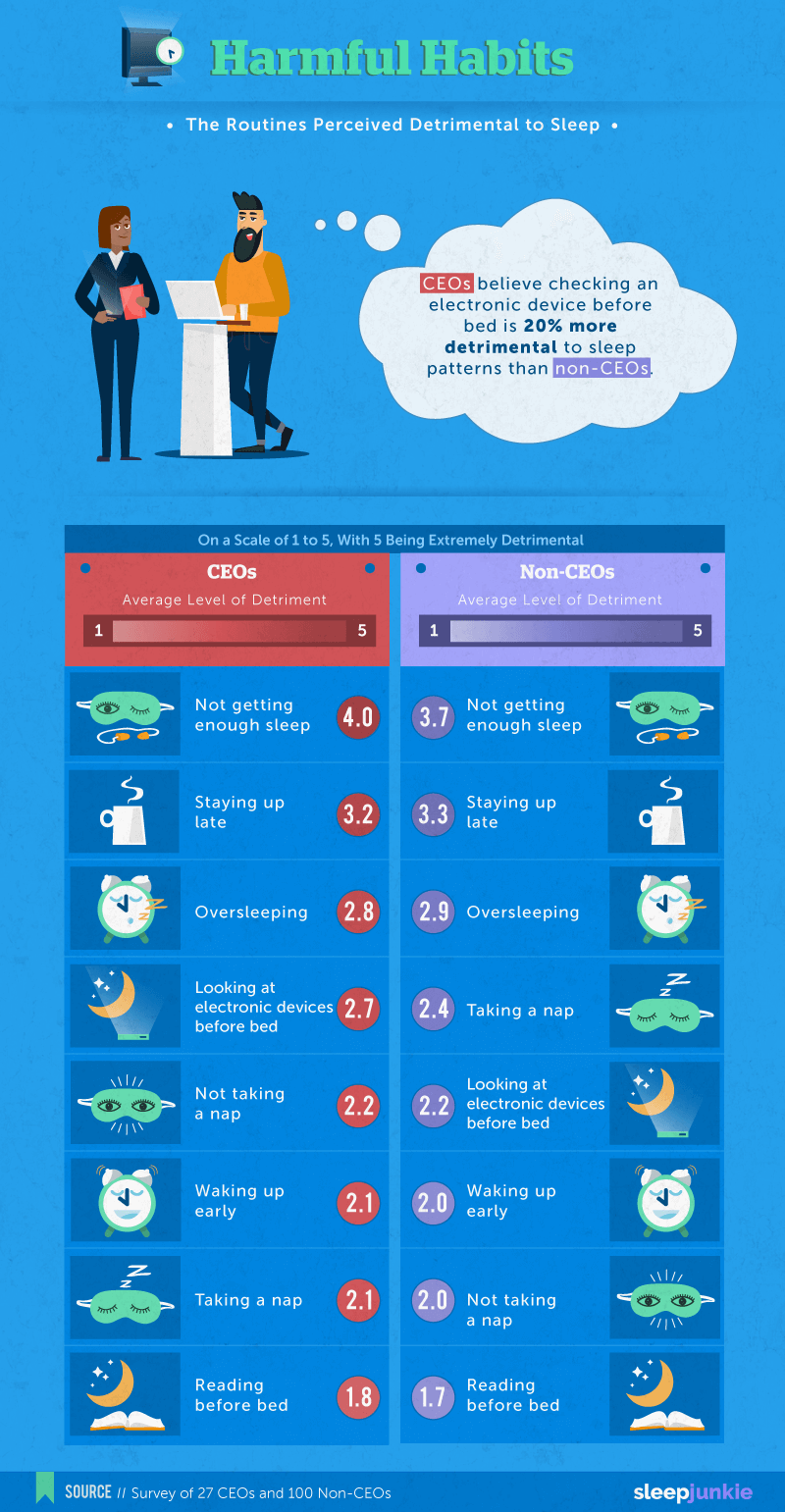 Being the CEO of a company may sound like the ultimate dream, but it certainly isn’t without its own challenges. No one is more responsible for the success and productivity of their brand than the CEO, and many of the company’s hardest decisions and responsibilities may fall on his or her shoulders.

For many, that could mean the workday never really ends. Americans everywhere are feeling overworked, regardless of their job titles, and are staying plugged in longer at their jobs. While it can be hard to disconnect from the day, CEOs were more aware of the negative effects of looking at their electronic devices before bed than anyone else. It can be hard to resist, but research shows the blue light emitted by most electronic devices can have a negative impact on the sleep quality you get at night and the productivity you experience the next day.

CEOs and non-CEOs alike believed not getting enough sleep was detrimental to their sleep, in addition to staying up late and oversleeping.

Perks of the Job

When it comes to the sleep habits that help us think better, work faster, and genuinely feel happier, startup CEOs could have some habits worth emulating. They recognized that getting up early, unplugging their electronic devices before bed, and maintaining consistent sleep schedules had a positive impact on them and the work they did. At the end of the day, building successful sleep routines can be just as important as the habits you carry with you throughout the day.

If you’re committed to getting better sleep at night, you don’t need to be a CEO to recognize the role your mattress plays in your bedtime routines. An uncomfortable mattress can keep you up at night, and even the fabric of your bed can affect your body temperature over the course of the night. At SleepJunkie, we believe everyone should sleep sounder by getting the most out of their mattress. Visit us online at SleepJunkie to learn more now.

We surveyed 27 CEOs working at both small and large startups about their sleep habits. Additionally, 100 non-CEOs working in traditional roles throughout a broad range of industries were also surveyed about their daily sleep patterns for an accurate comparison against CEOs.

Oh, you’re still awake? Before hitting the hay, feel free to share this study as long as it’s for noncommercial purposes only. Just be sure to link back to this page and credit SleepJunkie for the results.