After a long day (or short night of sleep), you yawn and feel your eyes start to slip off the road. Maybe you zone out for some time, not entirely aware of the traffic around you or how far you’ve driven.

You might think you’ll never fall asleep behind the wheel of a car, but in 2017, 795 people died across the U.S. as a result of sleep-deprived drivers. As startling as that number may be, the issue might be even more severe. The National Highway Traffic Safety Administration relies on police and hospital reports to determine if lack of sleep is responsible for accidents, and it estimates as many as 90,000 police-reported crashes involved sleep-deprived drivers in 2015.

For a more in-depth look at these deadly occurrences, we broke down newly released data including all 795 drowsy driving fatalities reported to the police in 2017. We compared those crashes to similar accidents from the previous year to learn which areas of the country are the most dangerous, the most common collisions caused by drowsy driving, and which time of the year is most often attributed to these perilous crashes. Read on to see what we uncovered and possibly even keep yourself safer behind the wheel. 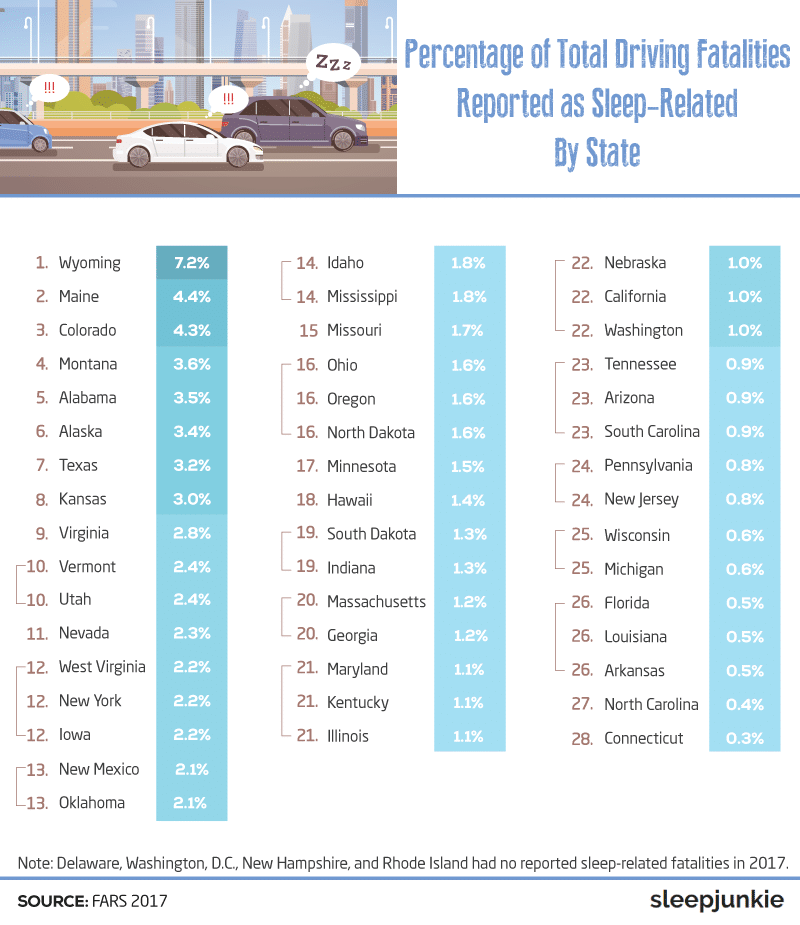 According to the Centers for Disease Control and Prevention (CDC), an estimated 1 in 25 drivers aged 18 or older reported falling asleep at the wheel within 30 days of the study.

Studies suggest drivers who don’t get enough sleep at night, commercial drivers who operate large vehicles, and people with untreated sleep disorders are among the most likely to fall asleep behind the wheel. If you aren’t sure just how tired you are, look for signs of yawning, blinking, drifting between lanes, and losing track of how many miles you’ve driven. Pull over and take necessary precautions if you identify any of these symptoms while driving. 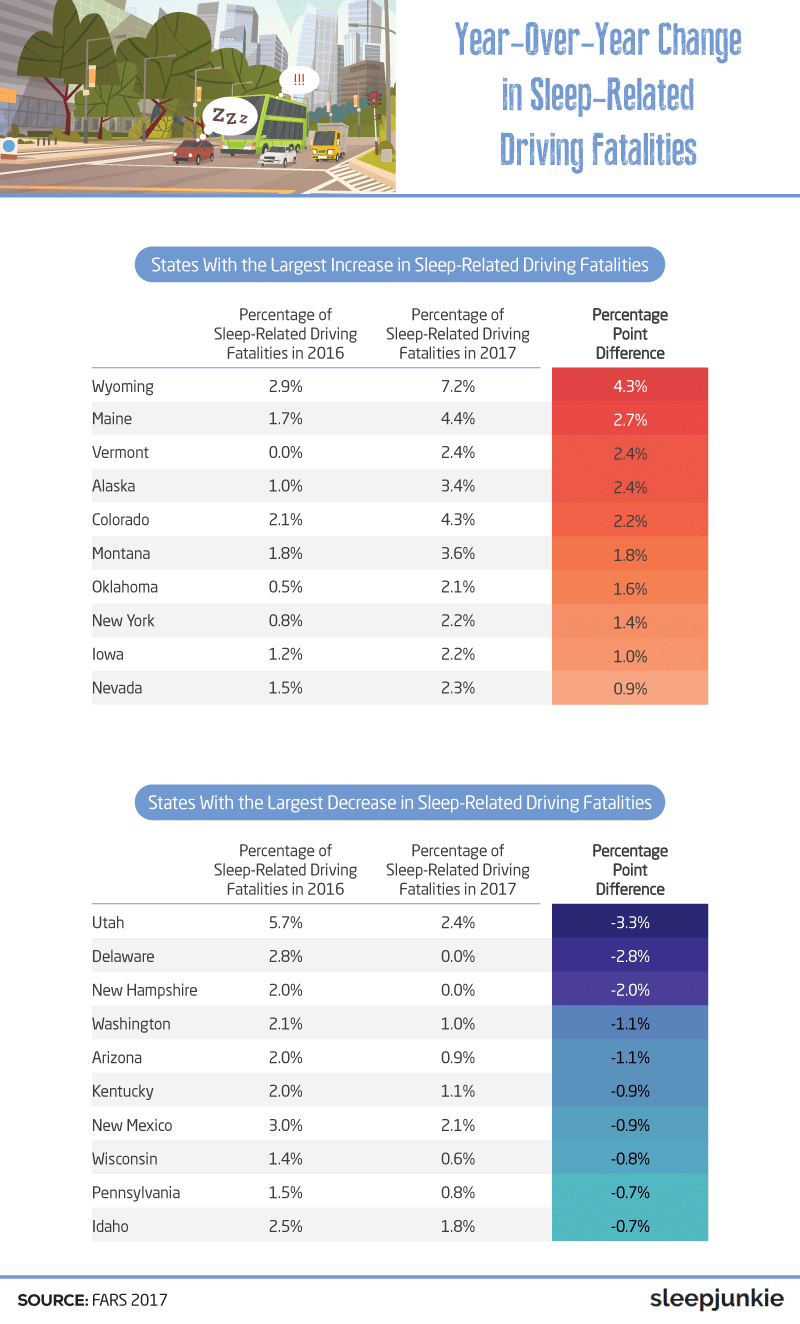 In 2015, Maine introduced a bill that would make it illegal to drive while extremely fatigued (including going without sleep for 24 consecutive hours or longer). Despite the bill identifying drowsy driving as a considerable risk factor, it failed to pass. Maine had one of the largest increases in sleep-related driving fatalities with a 2.7% increase from 2016 to 2017, second only to Wyoming.

Wyoming (4.3%), Vermont (2.4%), and Alaska (2.4%) also saw similar increases. In contrast, Utah (-3.3%), Delaware (-2.8%), and New Hampshire (-2%) had the largest overall decreases in sleep-related road fatalities from 2016 to 2017. In 2016, Utah’s Department of Public Safety revealed that more rural counties experienced this problem at higher rates than relatively urban areas. Perhaps the lights, noise, and action of cities sustain drivers’ energy and focus. 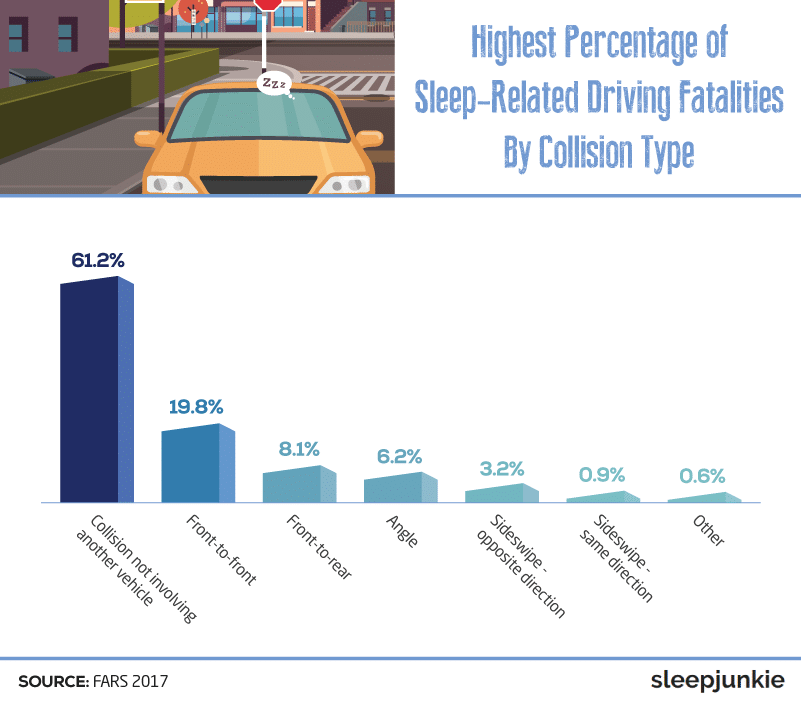 One study revealed that 6% of all accidents in the U.S. involve sleep-deprived drivers. Not only does this suggest that the dangers of driving while impaired are far more widespread than might be reported, but also it illuminates a tragic reality: Sleep deprivation affects more people than those who might fall asleep at the wheel.

Risky Roads, by Time of Day 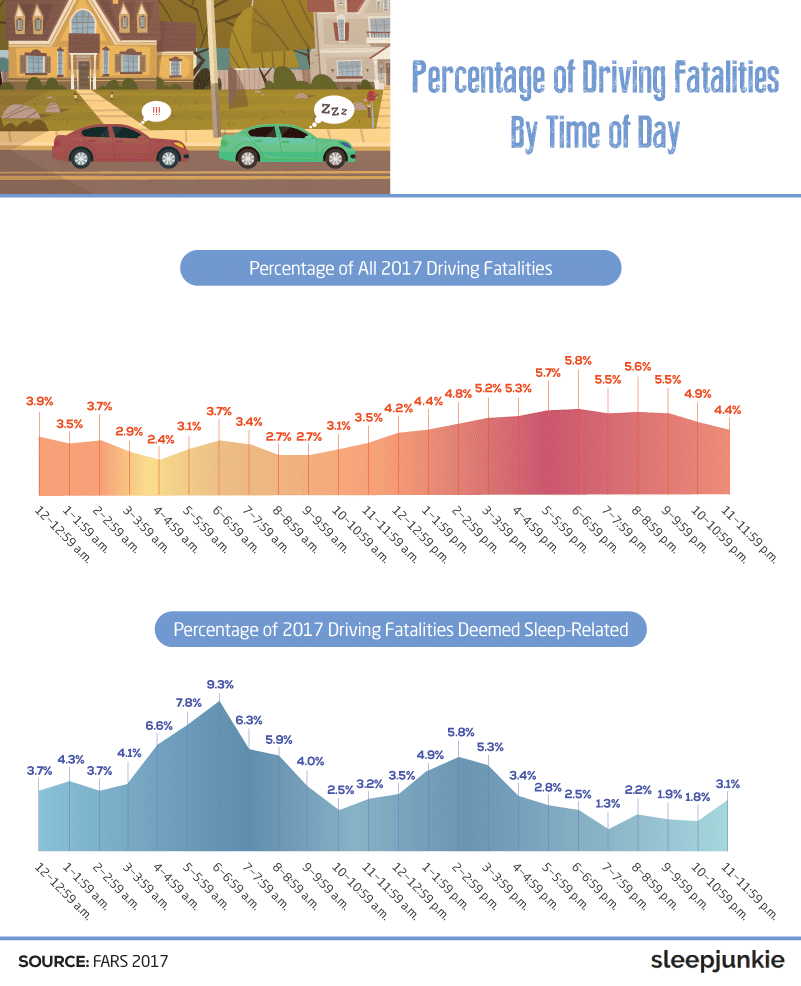 Research conducted by the American Sleep Foundation found that more than 40% of drivers had fallen asleep behind the wheel at least once in their life. At the same time, data from the National Safety Council suggests drivers are three times more likely to be in a car crash if they’re fatigued, although you might not necessarily know how tired you are until it’s too late.

Around 9% of driving fatalities deemed sleep-related in 2017 occurred between 6 and 6:59 a.m. In the hours leading up to this peak time (between 4 and 5:59 a.m.), the percentages of fatal drowsy driving accidents were similarly high. During these very early morning hours, fatigued commuters or tired employees finishing their night shifts are much more likely to be on the road. In contrast, evening crashes – from 5 p.m. and onward – were among the least likely times for fatal accidents caused by lack of sleep.

Risky Roads, by Day of the Week

After rising early for work and possibly returning home late, one might suspect extreme fatigue to occur during the weekdays. While around 13% of drowsy driving fatalities deemed sleep-related occurred on Monday, Tuesday, Wednesday, and Thursday in 2017, it was actually the weekend that posed a greater threat. Friday, Saturday, and Sunday accumulated the greatest portion of sleep-related driving fatalities.

Saturday, however, was the absolute most dangerous day for drowsy drivers. Seventeen percent of fatal sleep-related accidents in 2017 occurred on Saturday. Although the average employee won’t be heading to the office this day, they may be recovering from a late event from the previous night, leaving them too tired to drive safely.

Risky Roads, by Time of Year

In some sense, there’s a breakdown of order and an increase in freedom during the summer months. Children are home from school, some offices institute summer Fridays, and there’s a general sense of liberation. This may also reflect the danger of driving during those times.

Although drowsy driving invites its own risks, the summer is the most likely time for driving while distracted. Losing focus, both on the road and off, is directly correlated with drowsiness and a lack of sleep. Unfortunately then, it’s somewhat predictable that sleep-related fatalities jumped significantly during the summertime: May through August surpassed 10% of all 2017 driving fatalities that were sleep-related.

No one ever plans to fall asleep behind the wheel of his or her car. Even the idea might sound far-fetched, but studies show nearly 2 in 5 drivers have nodded off while driving at least once in their adult life. According to the NHTSA Fatality Analysis Reporting System data of all 795 drowsy driving fatalities, Wyoming, Colorado, and Maine represented some of the most dangerous roads with fatigued drivers. And while most drowsy accidents didn’t involve other vehicles, a majority of these fatalities occurred during peak driving times including morning rush hour, the summer, and on the weekend.

At Sleep Junkie, we believe better sleep means a better you – and less risk of drowsy driving accidents. That’s why we’ve created resources for sleep-seekers, from mattress reviews to guides. Whether you’re looking for a memory foam mattress in a box or a luxurious hybrid, learn how you can get the best mattress today. Your body depends on sleep, and you can rely on Sleep Junkie to provide you with the best insight on getting the best rest.

To compile this project, we utilized data from the NHTSA Fatality Analysis Reporting System (FARS). This nationwide census of fatalities is provided annually for public access. We compared data from 2016 to 2017 involving drivers whose “Condition (Impairment) at Time of Crash” was reported as “Asleep or Fatigued.” 2017 is the latest full year for which data were available.No statistical testing was performed, so the claims listed above are based on means alone.

Want to help encourage your readers to be alert while driving? Feel free to share this study with them for any noncommercial use with a link back to this page so that they can see the full extent of our research.